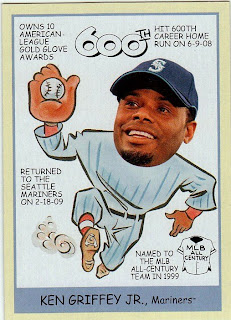 It's another weekend of pulling together some loose ends here on the blog. After all, it's not like I have any Topps Series II to feature.

I'll start with what I do have. Some of that ghoulish Upper Deck Goudey. And I'll begin by saying something nice: I still like the "heads-up" cards, like the Griffey Jr. here. I know some people are tired of them. I think it's just about the only thing redeeming in the entire set. 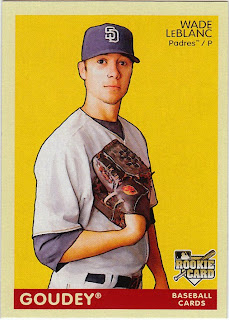 Because without them you just have cards like this. Yikes. Look at LeBlanc's spooky right eye. I've never heard of this guy, which makes this card even spookier. Maybe it's some demon figure disguising himself as a baseball card with a made-up name in order to hypnotize every collector into joining his underworld army of the damned. 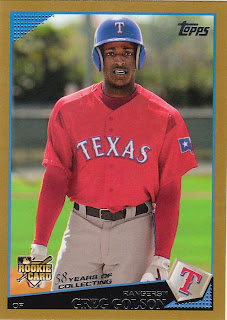 On to a different matter and card brand. I recently pulled this gold card of Greg Golson, former Phillie/current Ranger. But I had already pulled a gold card of Golson earlier this year. (One is numbered 242 and the other 265).
What are the chances of that? I'm still relatively new to the modern card collecting scene and this is the first time I've gotten doubles of a gold card. How common is that? Is there a statistician out there that can calculate the chances of the same person getting two of the same card when there are 2,009 versions of the cards? 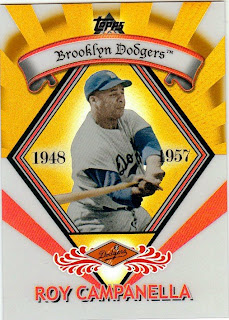 I also pulled this refractor out of the same cereal box. Damn it, I already have the Campanella. If anyone needs it, I'll trade it for another refractor or something Dodgery.
Also, I am eight cards short of completing Series I. I thought I'd complete it this week, but that didn't turn out. So if you have numbers 17, 27, 108, 109, 283, 317, 320 or 326 available, I'm interested. 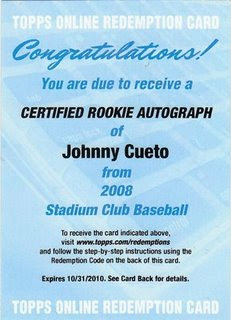 Next topic: my patience is wearing thin on the Johnny Cueto autographed card redemption. It is six days overdue. The ridiculousness of redemption cards has officially hit home. How on earth can a company issue one of these things when they can't get it to you in 15 WEEKS!
So, what should I do? Do I continue to wait it out or should I contact them and ask for a replacement of "equal Beckett value," whatever the heck that is. Experienced redemption card hostages, what would/did you do? 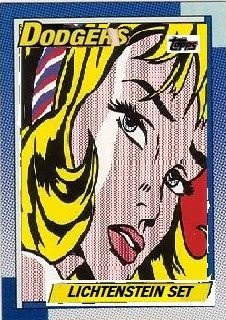 Lastly, the name for the 1990 Topps set is official. The poll says it should be called "The Lichtenstein set" after the famous pop artist. To try to illustrate how well the Lichtenstein's work goes with the card set, I created this card. It's very sloppy, I know. Basically a rough draft. I'm still learning what MS Paint can do, and I can't figure out how to crop things out of a photo and paste them back in without having a stupid white background show. I'm very slow on the uptake on stuff like this.
But anyway, you can see how the Lichtenstein painting "Girl With Hair Ribbon" goes well with the card design.
Thanks for voting in the poll. And for reading another aimless post.

Motherscratcher said…
Golson is perfect for the double earflap club that I haven't updated in 6 months. I need to do that.

jacobmrley said…
do you need babe ruth, I have two of him and ruth for campy seems a good trade.