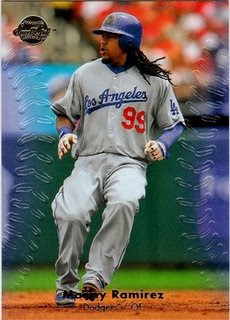 Dodgers, show everyone that you're more than a one-man team.

That's all I have to say.

(EDIT: I will have a follow-up post when I can get my thoughts together into something reasonably coherent).

Dubbs said…
First thing I thought of was "ah, it's just Manny being Manny".

Motherscratcher said…
What a shocker [seriously].

I guess I'm naive. I really am surprised by this. I wouldn't be suprised by anyone in the steroid scandal, except for a very small group of players. Manny was in that group that I, honest to God, thought was legit.

Dinged Corners said…
Not a shocker because Manny is caught up in the corporate maw. How can he not be? But perhaps there's more to the story.
May 7, 2009 at 2:50 PM

Jeffrey Wolfe said…
When I heard the news at work the first thing I thought was poor Greg. The Dodgers are off to such a great start too. I'll be interested to see what your thoughts are.
May 7, 2009 at 3:25 PM