Best garage sale of the year 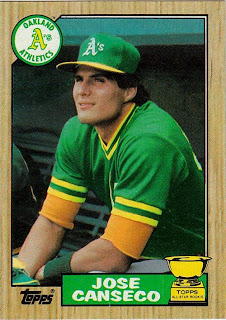 Either later today or tomorrow I'll be headed to the only garage sale I mark on the calendar each year.

I'm not much for garage sales, and when it comes to cards, the garage sale has become one giant landfill for 1991 Donruss. You almost never find anything decent in the card department anymore. Or at least I don't.

But there is this one sale that spans the same weekend each year. It's part of the town's field days weekend, an easy excuse to leave work early, stuff your face and get drunk. A bunch of the town's residents also gather all their junk together and hold a mass garage sale. You can go from house to house to house and buy plates that were eaten on in 1974 and video cassettes of "The Goonies."

One guy with a house on the corner has one of those card-catalog type filing cabinets jammed full with sports cards. I have paid him a visit each of the last 2 or 3 years. You can tell he only got into collecting when he thought he could get rich off of it. So a ton of the cards are from the late '80s/early '90s.

For me, I can always find a card or two from that era that I need. The only years I collected a bunch of cards back then were 1989 and 1991. So, one year at this garage sale I picked up the 1987 Jose Canseco card and another year I bought this card: 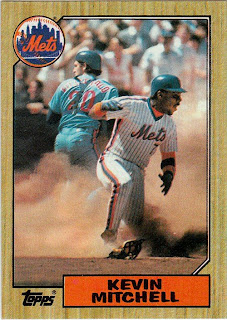 Just because it might be the best card of the entire 1987 Topps set. But that's mostly what this guy has. I grabbed a 1986 Roger Clemens card and last year a bunch of '83 Topps that I needed, all of them in excellent shape. But all cards easy to find.

He doesn't care about the price of the cards, which is the way it ought to be for overproduced cards. So you can get anything very cheap. And if you take the time to dig through the vast selection in the file cabinet, you can find some older stuff. He'll let you stand there all day if you want, although I start to feel uncomfortable standing in someone else's garage for more than an hour. 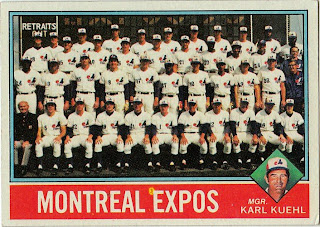 Last year, I grabbed this 1976 Topps Expos checklist because the one I already owned was bought when I was 11. I like the word "retraits" up at the top left. I'm not sure, but I think it means "cancellations." But I pretend it means "retreads," because that's what the Expos were until Andre Dawson came around. (Reader Dominic points out that "retraits" merely means "outs." Thanks Dominic)
I've passed up a 1974 Jim Palmer card because I had it already. I also passed up a Rich Gossage rookie card one year because I didn't have enough money and knew I was going to come back the next day to get it. But Gossage was in town signing autographs that night, which I stupidly forgot about, and the card was gone the next day. 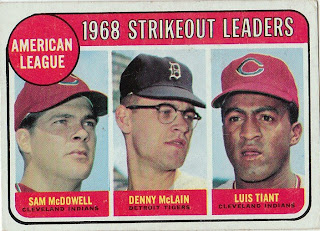 My favorite card bought at this garage sale was this card from last year. The 1969 Topps American League strikeout leaders card. The Indians had some kind of pitching staff in 1968. McDowell struck out 283 and Tiant 264. Sonny Siebert also struck out 146. But it was also the era of the pitcher.
So, who knows what I'll find this weekend. It won't be spectacular. But it will be interesting, and that's all that matters to me.

Anonymous said…
Every now and again I get an itch to go to one of the local flea markets and hunt for cheap cards. I never find anything good, but I don't expect to, either. My best find was a 5,000 ct. box stuffed with 91 Donruss (and other cards in that time frame) for $5. Not a terrible price for the box alone, plus I've sent some of the cards TTM for autos.

At least the person was asking a fair price.

BASEBALL DAD said…
We have those every year too. A community garage sale they call it.I've never been lucky enough to find anything good either.I may set up and try to sell this though.
May 29, 2009 at 11:44 AM

Steve Gierman said…
I never run across anything that cool, even though those are in almost every town around here.
May 29, 2009 at 12:16 PM

Cuntry Trash said…
Something about the 87 Topps Canseco card that I love. It may be the green shirt, it's definitely not the wooden border. Maybe it's the expression Canseco has.. it brings me back to 87 when I started collecting.
May 29, 2009 at 1:35 PM

madding said…
If they happen to have any Willie McGee rookies (1983) at a decent price (or any bargain pre-'79 Cardinals stuff), I'd definitely be interested. I'm sure I could find a way to make it worthwhile in a trade or something.
May 29, 2009 at 8:30 PM

Ben said…
The Mitchell card is certainly a nice one, but this is my favorite.