Awesome night photos, and Dodgers, too 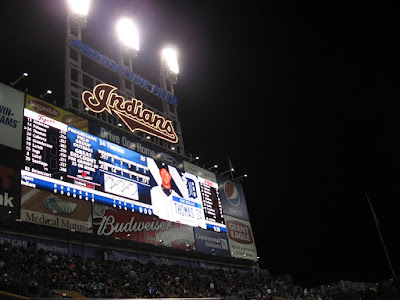 Greetings, from Jacob ... er, Progressive Field in Cleveland! (I can never keep the names of corporately sponsored stadiums straight).

Actually, I wasn't in Cleveland. In fact, I've only driven through Cleveland. I've never stopped at the stadium. I just know that it's nice, from what I hear.

And these are some nice night game photos provided by Baseball Dad (a.k.a. Jack) of All Tribe Baseball. He took his camera to the ballgame against the Tigers last week and was thoughtful enough to think of me and email some night shots! Great photos. You really have the feeling of being at the park with these pictures.

I tried to make one of them into a 1978 Topps baseball card with my fledgling MS Paint skills. But the most basic issues throw me for a loop, so I scrapped that plan until I can figure it out. I will settle for showing you some of the photos he sent. My favorite might be the scoreboard shot up top. 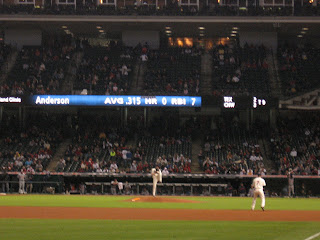 But here's another scoreboard shot with the infield and pitcher in action. 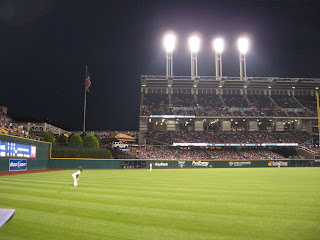 And this photo of all three Indians outfielders is very cool. There is nothing like going to a major league ballgame to illustrate just how much ground outfielders have to cover in their line of work. It's massive. 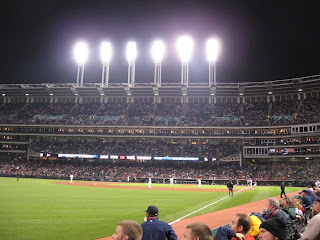 Here is another photo of the stadium lights. This is the one I tried to turn into a night card.
Jack also sent a great CD of baseball music and conversations that I just began listening to in my car. I haven't clicked on track 19 yet -- Tommy Lasorda's famous tirade when asked about Dave Kingman. I can't wait for that.
And it wouldn't be a complete package without some Dodger cards! Some very nice ones, too. Let's see what's in the kitty: 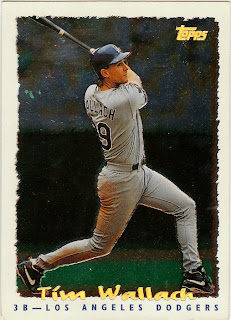 Tim Wallach, 1995 Topps cyberstats card. This is one of two Wallach parallels that Jack sent. According to the projected stats on the back, Wallach would've driven in 107 runs if it wasn't for the strike. He was having a pretty fine year in 1994. 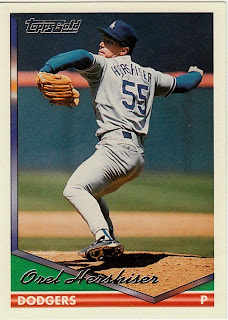 Orel Hershiser, 1994 Topps gold foil. Nice. I could never get used to Orel being an Indian, let alone a Met or a (*gasp, wheeze*) Giant. Thank goodness he returned to the Dodgers for his final season. 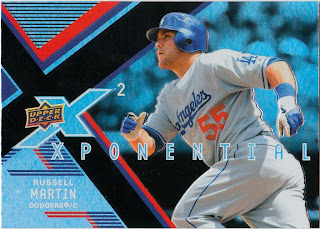 Russell Martin, 2008 Upper Deck X (Xpotential 2 insert). A card set whose only redeeming value was the insert cards, like this one. I guess that's kind of like playing an entire sports season and then letting everyone participate in the playoffs. What's the point of the regular season, Upper Deck? 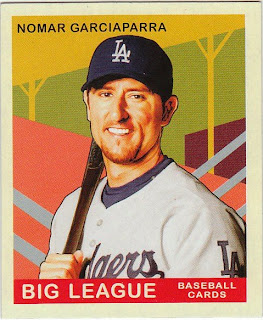 A 2007 Goudey green-back mini of the forever-injured Nomar. Never been a big present-day Goudey fan, but the 2007 set was better than this year's offering. 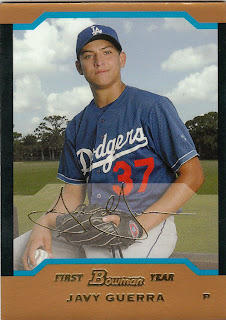 Javy Guerra, 2005 Bowman Draft Picks. Guerra is still toiling in the Dodgers organization. And he has a blog. Apparently, he was hoping to move up to Double AA Chattanooga this year, but he's back in Class A in Great Lakes. 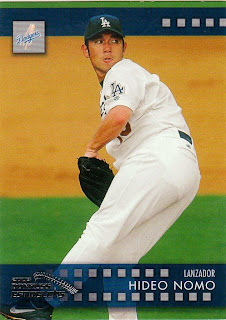 I'm liking Hideo Nomo cards more and more. This is a 2003 Donruss Estrellas card. So we have a Spanish-language card of a Japanese pitcher. And if you start singing "We Are the World," I'm going to reach through the monitor and smack you. 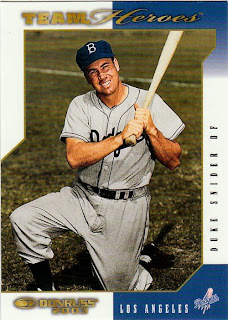 I have to end it with the Duke with a 2003 Donruss Team Heroes card. He'll always be all right with me after signing my cards TTM. Well, he was all right with me before that.
Baseball Dad, thanks a bunch for the media friendly package! I received cards, photos and music! Wow. I have a stack of Indians, etc., set aside for you. Unfortunately, I just ran out of mailers. Got to get some more and send them out. But they're almost on the way.

BASEBALL DAD said…
Glad you liked the package! I love the cd. At the end of the month I have plans to meet up with Harold from "Bluegrass Smoke Signals" and take in a Columbus Clippers night game.They have a brand new ballpark in Columbus and I'll definitely have my camera with me!
May 13, 2009 at 8:30 PM

Laurens said…
Hideo Nomo pitched in the Dominican Winter League a few years ago, when he was trying to make a comeback.
May 14, 2009 at 2:30 AM