How the TTM thing is going 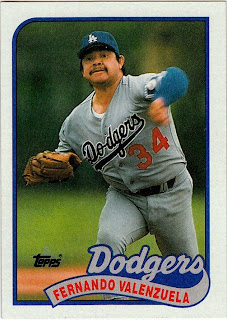 It's been a little over a month since I sent out my autograph request to Fernando Valenzuela. The letter is still floating out there somewhere, I believe, but that's OK. Valenzuela is a busy guy, and from what I've seen it takes around two or three months to get an autograph back from him. That's no biggie.

But in the meantime, I thought I'd try to get autographs of a few other favorite Dodgers. Thanks to to the good folks at Dinged Corners and gcrl, I have a few more addresses that I can place on envelopes!

Here is what I plan to send out in the next few days (You'll notice they're all pitchers. I like pitchers): 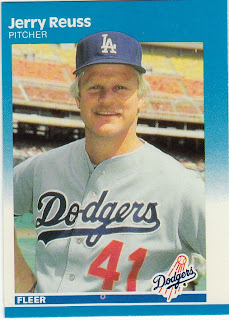 Jerry Reuss, 1987 Fleer. The Dodgers featured a lot of goofballs during the 1980s. Jay Johnstone, Rick Monday, Mickey Hatcher. But Reuss was my favorite goofball. He's now a broadcaster for the Dodgers and I think I'll be sending this '87 Fleer card, because '87 Fleer gets more and more awesome by the day. It's officially an SIITCS (Set I Intend To Collect Someday). 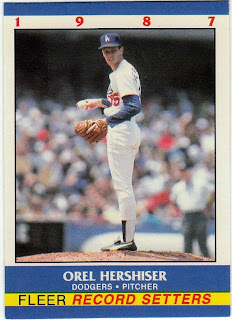 Orel Hershiser, 1988 Fleer Record Setters. I'm not sure of the success rate on Hershiser autographs. He's a great guy, but I'm sure he gets a ton of requests, and he travels during the season, too. But I'll be sending this card to him. It's a tiny photo, but there's lots of space for an autograph, and if he signed with a red sharpie, I would officially forgive him for pitching for the Giants. 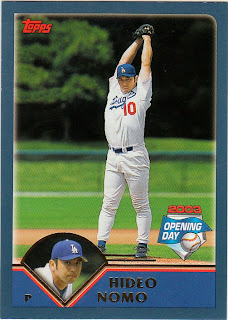 Hideo Nomo, 2003 Topps Opening Day. Now, here's a guy who must get a ton of requests. If anyone knows what the deal is with Nomo and receiving autographs, please let me know, because I'm going into this blind. This card is too glossy for autographs, but I like it so much that I'm going to send it. I'll probably try that eraser trick to get the gloss off, although I don't entirely know what I'm doing. 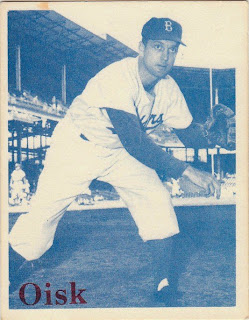 Carl Erskine, 1974 TCMA '52 Boys of Summer. I am going to send this card out first. It would be very cool to get an autograph on this card. I have always admired Erskine, ever since I read "The Boys of Summer" for the first time. And I enjoyed his recent book "Tales From the Dodger Dugout" quite a bit.
So wish me luck. Depending on how I do here, there might be a couple other Dodgers I consider.

zman40 said…
Goog luck with the Nomo. I wouldn't mind getting his, either. I was hoping to get it last year while he was with the Royals, but he got cut before the first homestand.
May 27, 2009 at 3:59 PM

Ben said…
I sent one to Hershiser about a month ago. Still waiting, but I know not to expect anything until after the season.
May 27, 2009 at 4:34 PM

night owl said…
I haven't sent the Hershiser one yet.

Sooz said…
I really need to get on this TTM bandwagon.

The only ones I ever sent out were last year to some Yankees prospects, including Austin Jackson. I got his back in about a little over a week.

Anonymous said…
I did get a signed Hideo Nomo card back when I wrote to him 4 or 5 years ago, but I have no idea if it is authentic. His overall response rate on SportsCollectors.Net isn't very encouraging, but Nomo does seem to sign from time to time.

Mad Guru said…
I don't remember how I came across it but it has worked for me. Take baby powder to the glossy card. Just dust it and then wipe it off with a kleenex. Takes the sheen off.
May 27, 2009 at 9:02 PM

I may try Russell and Mota. I'm pretty much limiting it to my absolute favorite Dodgers. Neither of those 2 fall in that category, but you never know.
May 28, 2009 at 10:22 PM