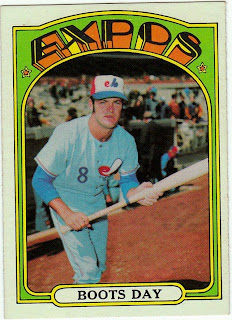 The 1972 Topps Set blog is back in business!!! After a month of quiet, our friend MMayes is back to featuring the grooviest set around.

And he returns with a bang by featuring the one and only F-Rob, as the kids would say today. He's better known, of course, as Hall of Famer Frank Robinson (how ghastly would it be if we actually referred to stars of the past as "B-Rob" for Brooks Robinson, "J-Rob" for Jackie Robinson or "T.W." for Ted Williams?)

To celebrate the return of the '72 Topps blog, I've decided to feature this monstrosity/rare masterpiece from the 1972 set: 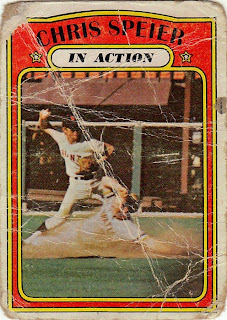 Wow. This is card No. 166, Chris Speier In Action. And someone obviously took the "In Action" statement a bit too literally. This card has seen more action than Kim Kardashian on a "Tilt-a-Whirl" (I don't even know what that means).

I received this card in a trade, believe it or not. I actually requested it, knowing fully its history and condition. Yes, folks, I may not be all there. But that's not the point. The point is, in recognition of the triumphant return of the 1972 Topps blog, what should I do with this card?

A) Put it out of its misery. It's obviously begging to die. Find a landfill and be done with it.
B) Hide it in the shoebox that contains all of those dead president cards that card companies are foisting upon us.
C) Feature it proudly in my '72 Topps binder and make up some story about how my brother thinks Chris Speier is the Antichrist (he did play for the Giants) and has made it his lifelong mission to destroy all of his cards.
D) Take it to Kinko's, blow it up to 8-feet-by-12-feet, hang it on the bedroom wall, and explain to my wife that I really do still like girls.
E) Find Chris Speier's address, send it to him, and ask him to autograph it (I actually like this idea).

MMayes said…
Thanks for the kind words. Hopefully I'll have some consistency, but the summer brings on other things to do.....

I say either send to Speier to sign (along with another nicer looking one) or proudly put it in your 1972 binder, but either way, admire how rookie Chris is hanging in there while Bob Robertson (my best guess) is trying to take him out in a preview of the 1971 NLCS.
May 31, 2009 at 10:28 AM

Dinged Corners said…
Normally I have doubts about getting pre-1980 cards signed as I'm not sure whether signatures add to or detract from the apperance of vintage cards. However, in this case, E is a must! It would be fantastic. (Let us know whether you need the address.)
May 31, 2009 at 11:58 PM