May 11, 2009
(Good news everyone. According to the always useful holidayinsights.com website, today, May 11th, is "Eat What You Want Day." If that isn't a day to appreciate, I don't know what is. Time for Cardboard Appreciation. This is the 30th in a series): 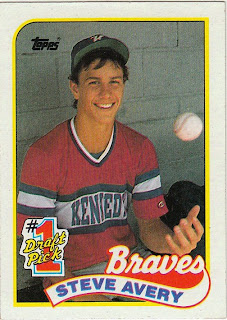 I'm tired, and a long work week lies ahead, so I'll keep this short.

When card companies began placing high school and college players in their flagship sets in the late 1980s, I was instantly disgusted. I paid good money for cards of major league players. What did I want with a picture of a high school kid?

Little did I know that this was the beginning of a whole new segment of card collecting, producing a card of a top prospect as early as possible to take advantage of the growing legions of collectors who wanted players' "rookie cards." I had only begun to hear about rookie cards in the early 1980s, and had made sure to hang on to a few key ones, like the '75 George Brett and the '80 Rickey Henderson.

But a high school kid? That didn't interest me in the least.

Still, for some reason, I have always liked this card. Yes, Steve Avery is wearing his John F. Kennedy High School uniform. There is no doubting that. But a smile and a carefree toss of a baseball can melt a cynical heart. It made me forget that I was supposed to dislike this card.

It still makes me forget. To this day, it's about the only card of a high school kid that I can appreciate.

Ben said…
For obvious reasons, I love that card. I prefer his '89 Bowman card because it at least shows him in a Braves uniform.

But for the most part I agree with you. College pictures I can accept. High school? Maybe, but only if he's a nationally recognized prospect and drafted in the first round, I don't want to see some seventeen year old kid who was drafted as the 357th overall pick though.

Andy said…
Greg--you mentioned having some junk wax available for trade--I'm actually interested in trading for some. Can I email you about that? I just pulled a 2009 Dodgers jersey card I'd make the centerpiece of the trade.
May 11, 2009 at 12:46 PM