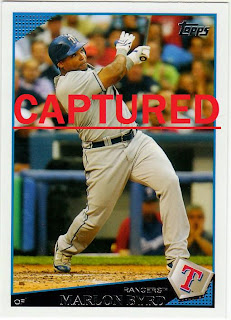 Thanks to reader Drew, my 2009 Topps Series I set is now officially complete. The Marlon Byrd card is mine, and I can remove the throwback Byrd card that I had as a seat-filler.

It's fantastic to see readers out there coming to the rescue of fellow collectors. Because I believe we all know the feeling of thinking we have completed a set only to realize we've missed a card or two. It's happened to me at least a half-dozen times.

Probably the most disturbing case, for me, came with the 1984 Topps set. I had purchased the entire set at once, the first time I had ever done that. It was my intention at the time to rid myself of the time-consuming practice of collecting a set. After all, I was a big shot college boy, and I didn't have time for frivolity (chasing girls and drinking beer is definitely not frivolity. It is gravely serious business).

But much, much later, at least a decade later or more, I was cataloging my '84 set and realized I was missing one card. 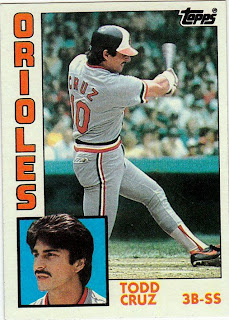 It was this card. Todd Cruz, number 773 of the Orioles. I knew I had the entire set when I bought it. I made sure I went through all the cards at the time to see that they were all there. But somewhere along the way, I had lost the Cruz card.

That missing card bothered me more than it ever should have. But the purchase of my first completed set was a point of pride for me then and a 791-card set just wouldn't do.

It was years before I tracked down another Cruz card. But I do have it, and just like Marlon Byrd, I will always remember a non-descript player like Todd Cruz because of how elusive his card was.

Thanks, Drew. I'll keep my eye on the Greinke cards.

Motherscratcher said…
If Daniel LaRusso would have grone up to be hispanic instead of italian he would have been Todd Cruz.

Motherscratcher said…
Did I really type "grone"? That is awesome. I'd like to play it off like I did it on purpose to be funny, but I did not. I did it because I'm an idiot.

night owl said…
You should have played it off like you meant it:

Wikipedia: "Grone is a comune (municipality) in the Province of Bergamo in the Italian region of Lombardy, located about 70 km northeast of Milan and about 20 km east of Bergamo ..."

hiflew said…
I just found out I did the same thing with my 85 Topps set. I was sure I had it finished and when I was putting them in an album I saw I was missing Wayne Krenchicki of all people. Oh well, at least it wasn't the McGwire or the Clemens.

I ordered it off Sportlots along with a few other cards before I went crazy.