Glad I'm not a Twins fan 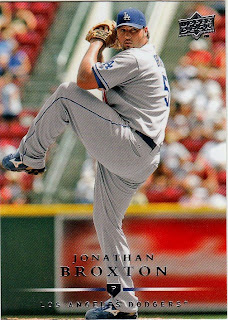 I'm a person who is well aware of his faults. No need for you to call attention to them. I know the rundown. I have the list. I check it daily.

But even though I could start a blog on the topic, there are times when I come across a fault of mine that I never knew I had. Trading cards through the blogosphere has brought one particular previously unknown fault into focus, and here it is:

You may think this isn't much of a fault or that it doesn't even fall under the definition of the word, but let me tell you: if you are trading cards with a Twins fan, it's a definite shortcoming.

I don't know what it is. You may think it's because the Twins are a small-market team and the card companies don't feature as many Twins players. Well, then how come I have no problem pulling Kansas City Royals and Houston Astros? How do you explain my Carlos Lee temple o' cards in the basement? I most certainly pull small-market team cards. How else would I know who Steve Pearce is?

The only thing that brings me solace about my inability to find Twins cards is that I know it could be worse: I could BE a Twins fan and unable to pull Twins cards. Now that would be bad.

You may be chuckling over this, but I know a guy who might not be: Topher of Crackin' Wax. Because he just sent me a bunch of cards that I need, and I am supposed to be reciprocating shortly. The only problem is the Twins well is bone dry. I have a few key Twins cards that will be on the way, but I definitely need to find more to thank Topher for the fine stack of cards.

One of the cards sent was the 2008 Upper Deck Jonathan Broxton card at the top of the post. It's the last card I needed to complete the Dodgers team set. I love it when I can ignore a set forever. 2008 Upper Deck? You officially do not exist anymore. 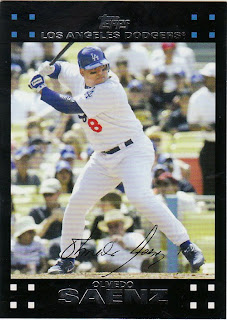 Here is another set I'm done with forever. 2007 Topps Updates & Highlights. Olmedo Saenz was the last Dodger I needed for that set. Now, there may be some relic of some Dodger out there that I still need, so I guess I better not close the book on the set for good. 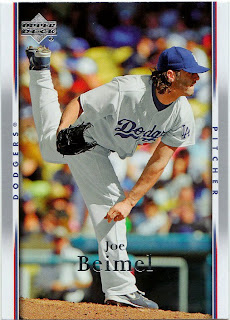 Believe it or not, this is my first Joe Beimel card. Half of you are saying, "who's Joe Beimel?" But for Dodger fans, finding a Beimel card a couple of years ago was a necessity. If only so you could show your friends a picture of the reliever who cut his hand on a glass in a bar and KOed himself out of the postseason.
Topher sent three 2007 Upper Deck Dodgers. I still need a bunch more. I keep passing up the marked down '07 Upper Deck packs at Target. I shouldn't do that, considering the number of Dodgers I need. It's just that I find the set very uninspiring. 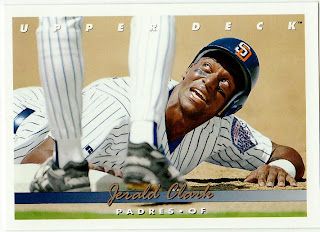 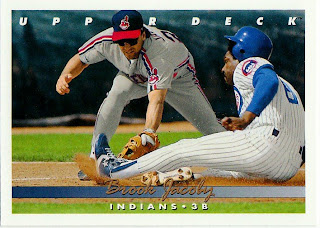 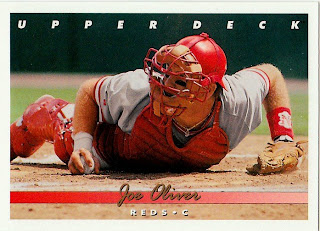 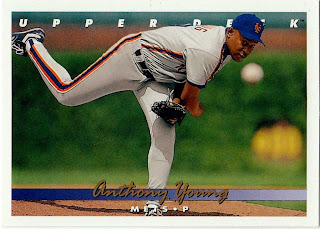 1993 Upper Deck! Now this is an inspired set. My favorite Upper Deck set ever. I might have mentioned that.
These are the first '93 Upper Deck cards that I have received in a trade that were not Dodgers. I guess that means I'm officially trying to complete the set. The want list is up, and Topher sent about 15 or so '93 UDs. I featured some of the horizontal cards he sent. My favorite is probably the Brook Jacoby card. Before interleague play began it was very odd seeing an American League team playing a National League team. The Indians-Cubs combo reminds me how different that was at the time. 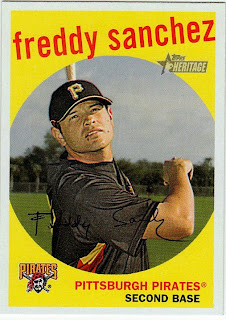 I hope you won't mind me featuring 2008 Heritage cards on the blog 20 years from now. Because I don't expect to finish the set in the near future. But Topher did send 20 or so cards from my Heritage want list. Freddy Sanchez gets to be the cover boy because I like him. 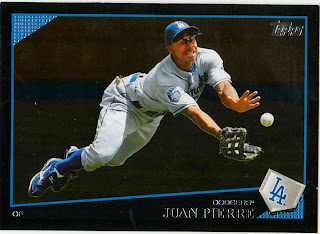 Lastly, here's a Juan Pierre Topps dark card. Down to three Dodgers needed to complete this set.
Here's where another of my faults comes into play. I typed the wrong number into my want list, so instead of getting the Casey Blake Topps dark card, I got a Lastings Milledge dark card. Oh well, at least it's a cool photo.
Topher, thanks a bunch. You'll be happy to know that I went to the market today and my luck with Twins cards finally turned around! Unfortunately, the card collecting gods decided if they were finally going to let me pull Twins, I wouldn't get any Dodgers. Phooey.
(P.S.: Last night, this blog went over 30,000 unique visits since I started tracking stuff like that. Thank you for reading).

Anonymous said…
Yeah, being a Twins fan can be pretty hard. I end up having to buy most of my Twins cards through sets.