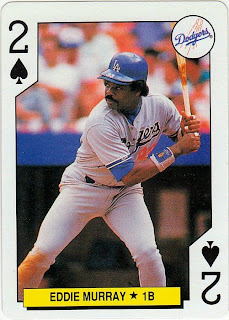 I'm wondering how many bloggers have tried to email me this week while I'm off from work. One of the rules of furloughdom is that you cannot check your work email. And since my contact email on my blog is my work email, anything anyone has sent me -- trade offers, questions, thank yous, nastygrams -- is just going to sit there until I get back to work next week.

So if you really need to contact me this week, let me know in the comments, and I'll get back to you as soon as I can. Before next week anyway.

Now on to the good stuff. It has been a week and a half since any card packages have appeared in my mailbox. The last 10 days or so have been a return to the old days of disappointingly crappy mail -- ads, bills, and you-have-been-preapproved-to-go-deeper-into-debt-than-you-already-are letters. So I was ever-so-happy to see two bubble mailers waving proudly to me when I opened the front door. That's more like it!

Both were unexpected. I'll deal with the first one tonight, which was from Rod of Padrographs. I enjoy getting an unexpected package even more when I have already started a stack of cards for the person who has mailed the package. The Padres stack is modest, but after sending out a few packages yesterday, it is among the group of packages that are on deck, meaning I will be adding to it and sending it out the door soon.

I like Rod's blog quite a bit, and I feel an extra connection to it because he runs a bookstore, meaning he's best buds with the written word. And anyone who enjoys a good book is all right with me. He sent along a nice decorative bat, featuring the name of the bookstore, with my cards. I always appreciate something extra like that. It gives you something that you will remember the person for long after the cards are in the binder. I should do something like that.

Rod sent a tidy stack of Dodgers, which I know is easy for a Padre fan to do. As a Dodger fan, I want to puke every time I see a Matt Williams card. I don't even like having them in the house. So I'm sure he wants to get rid of a few Dodgers.

Here are a few of the ones that he sent: 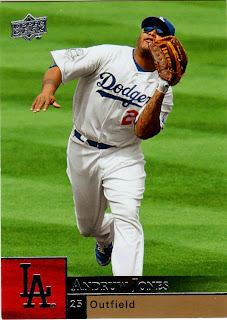 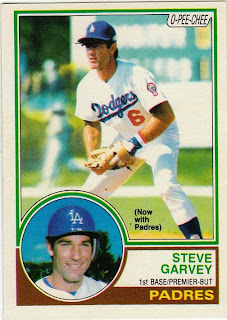 An O-Pee-Chee! This is a great card. Although the "Now with Padres," reminds me of those "Now with Retsin!" Certs commercials.

Technically, this is not a Dodger card. It's a Padre card. At least according to the Night Owl team classification system in the Night Owl rule book. But I'm not going by the book with this card. I'm trying something crazy. I'm batting the pitcher eighth in the order, and I will be putting this card with the rest of my Dodgers. 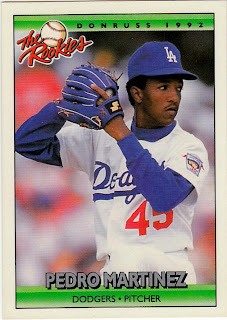 Another cool card. Any card of Pedro as a Dodger is. Although it makes me wistful. And there's too much wistful on this blog. Yeah, I admit it. Sometimes I come close to breaking the nostalgia meter. But I'm working on it. 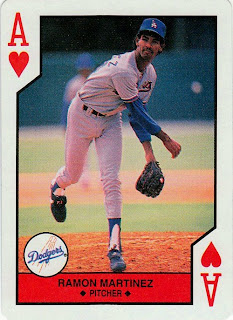 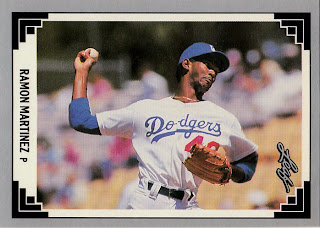 Somehow, Rod managed to find two Ramon Martinez cards that I did not have even after the 170-plus Ramons that I received from Thorzul. 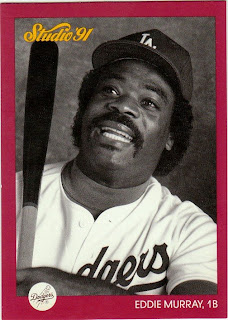 OK, get ready to be stunned and amazed. I took a look at this card and tried to determine what they were going for when they had Murray pose like this. I guessed that they told him to act like he was admiring a titan blast. But in my head I thought, "It looks more like he's laughing at something he saw on one of those TVs that they prop up high in restaurants. He's probably laughing at something from 'In Living Color.'"

I cannot prove that I thought that. I don't believe "thoughts" are admissible as evidence in court, but that's what I thought. And I just want to add that I've never seen this card before in my life.

Now take a look at the back of the card: 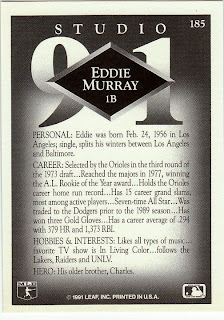 Look a little closer. Here, Studio was nice enough to circle it for you:

All right, a third of you are calling me a liar, another third are looking for the pitchfork and phoning your mob friends because you've found a witch, and another third are wondering what I'm blithering about. But I thought it was cool. 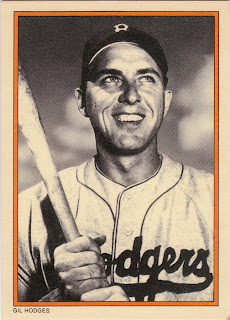 I'm ending it with this 1985 Topps KayBee Toys card of Gil Hodges. Until a few weeks ago, I had never heard of this set, and then I pulled an Ernie Banks card from one of those dollar-store bags. I like these cards a lot. I don't know if they were actually selling them in toy stores. It seems an odd thing -- to be marketing ballplayers who had played 30 years ago to children.

Rod, many thanks for thinking of me. You'll be seeing some Padres from me very soon.

beardy said…
Eddie Murray is awesome, and thank you for posting about him.