I don't know what to call these cards 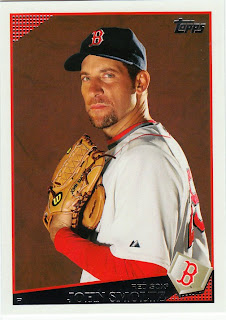 Do you hear that? That's the sound of two card bloggers' blood pressure readings traveling the route of a Mike Schmidt pop fly in the Astrodome. (in other words: it's going a long way north and might not come down).

Do you think Smoltz will ever pitch a game for the Red Sox? I say the chances are good. He performed well in a rehab start last week, and he's supposed to be starting again today.

But this card picture does remind me of the many times that Topps depicted a player with a team for which he never played. Steve of White Sox Cards just had a post about one such player. I really wish I could come up with a great name for cards like this. I'll have to work on that. 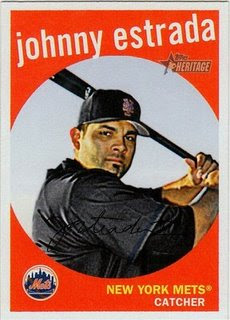 Here is another example from 2008 Heritage. Johnny Estrada never played for the Mets. He was acquired from the Brewers basically so they could get rid of reliever Guillermo Mota. But the Mets had just acquired catcher Brian Schneider and didn't have a place for Estrada, so they let him go to the Nationals.

And Topps thought they were being so smart jumping on the offseason transaction.

The 1970s are full of examples of these kinds of cards. With the dawn of free agency and expansion in 1976, Topps couldn't keep up. So you ended up with cards like this: 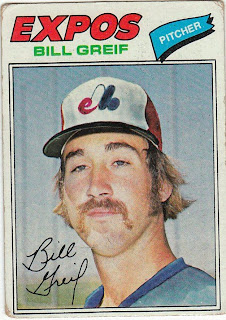 A very '70s-ish Bill Greif wearing a painted-on Expos cap and some odd, painted jersey. Greif was traded from the Cardinals to the Expos in November 1976. But Greif was released by the Expos during spring training in 1977. And that was the end of his career. So in Greif's final card, he's pictured with a team for which he never played a regular-season game.

Most 1960s cards of players who didn't end up playing for the team for which they're listed go hatless in their photos. Even though most collectors hate hatless players on their cards, it's probably the smarter way to go. Better than airbrushing out logos or painting in new ones. Or photoshopping them now. Because there's always the risk of getting caught with your pants down. Better to go hatless than pantsless, I always say. 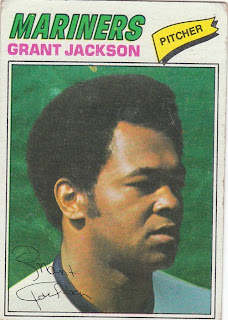 One of my personal favorites is this 1977 card of Grant Jackson.
Jackson played for the Yankees in 1976 and then was selected by the Mariners in the expansion draft. Thirty-two days later, the Mariners traded Jackson to the Pirates, a team he helped win a World Series.
But in that 32-day period, Topps decided that Jackson would be a Mariner for the 1977 set. So they found a hatless shot of Jackson, did some weird painty thing with the jersey, and I'm semi-certain they did this, they painted the wall behind Jackson green, because one of the Mariners' colors is green. "A green wall, of course!" Topps said. "That'll show collectors that Jackson plays for the Mariners."
Now, maybe they just got Jackson to pose in front of a green wall. Or maybe they just got lucky and found a photo of Jackson in front of a green wall. Maybe it's not even a wall. Maybe it's just a coincidence that the background is green and Topps didn't give it a thought. But I'm saying they actually went through the effort of painting the wall green, until someone comes up with a more plausible explanation.
So, maybe, if we're lucky, Smoltz will never play for the Red Sox, and we'll have our "I don't know what to call this card" for the 2009 set.

Rod (Padrographs) said…
and with all the bowman rookies who never play for the team they are pictured with, the numbers double
May 26, 2009 at 3:46 PM

Jim said…
We can add Ronny Paulino's 2009 Topps Heritage card (with the Phillies) to the list. Especially painful since he helped beat the Phils last night. Most famous (?) "untraded" card in history - Curt Flood with the Phillies in 1970 Topps.
May 26, 2009 at 4:15 PM

dayf said…
World Series press pins for teams who ultimately didn't make it to the Series are called Phantom Press Pins. These could be phantom cards. Gary Matthews Jr. Has a phantom Braves card in the '06 set I think since he was with the team in Spring Training.

Smoltz can pitch for whoever he damn well pleases as long as he quits whining about how mean the Braves front office were to him.
May 26, 2009 at 6:07 PM

Me and the wifey stopped by the Merrit winery this afternoon, and I picked you up a bottle. Heard some hip on the radio so I though I would stop by your rocking blog, and say hi. I will send it out this week.