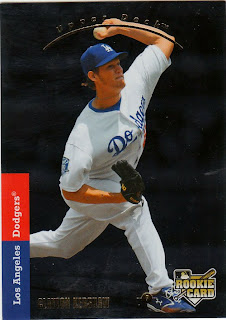 I am coming up on the one-year anniversary of two happenings that have developed into an everyday fact in my life.

The first is becoming a dog owner. The second is the discovery of sports card blogs. You may not think dogs and cards have much in common. In fact, I've documented more than a couple of times that the two are pretty much mortal enemies. But the past week has emphasized how useful they are in my life.

I experienced probably the most heartbreaking week on the job I have ever endured. I won't go into it here, because I don't feel like rehashing and I'm sure many readers don't care. But what helped me avoid coming home and plopping on the couch in a depressed lump was a dog that greets me ecstatically each day and an army of card bloggers to take my mind away.

Oh yes, and there are new cards to take the edge off, too.

It took the experiences of this past week to finally succumb to buying the blaster of Upper Deck Timeline that I have been staring at for months. I always blew it off, watching it collect dust, hoping they'd finally mark it down. But they never marked it down and then the crapstorm at work hit full force and Upper Deck had me hooked. Nothing great in the box, although Timeline is probably in the top 3 in terms of entertaining blaster busts. The Clayton Kershaw card up top is probably my favorite.

Meanwhile, bloggers have come through on another front, officially completing the 2009 Topps Series 1 set for me. I can finally place them in sleeves and the binder I bought. One less stack of cards on the shelf.

Both Scott of Hand Collated and Peter of Dropped Third Strike supplied the final eight cards that I needed. Even though everyone has moved onto Series 2, including myself, I'm showing the final eight here. 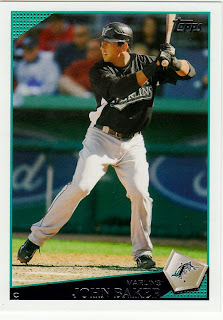 John Baker, Marlins. I don't know who he is. But I do know Ford really likes the Marlins. 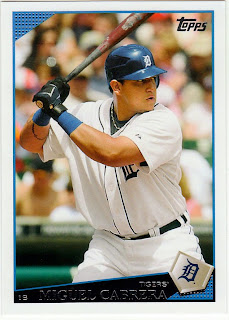 Miguel Cabrera, Tigers. Ever since Cabrera arrived with the Tigers, I get Cabrera and Magglio Ordonez confused. Tigers fans probably don't like that I said that, but my brain gets muddled easily. 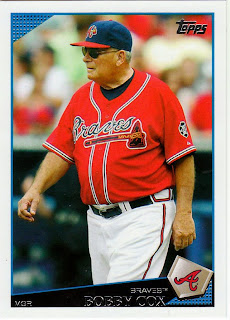 Bobby Cox, Braves. Bobby is wearing his Sunday best. When the Braves were regulars on TBS, Cox was pretty much the face of baseball for me. I saw that guy's mug more than any other person. More than Jeter, more than Torre. 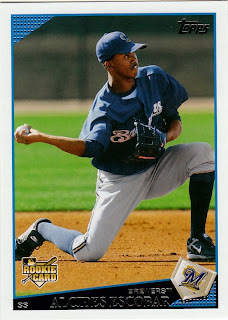 Aclides Escobar, Brewers. Again, don't know who he is. The back says his nickname is "Inspector Gadget," so that's something. 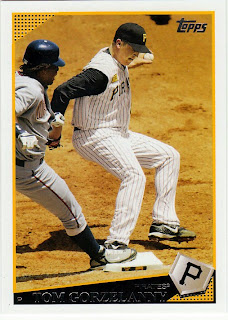 Tom Gorzelanny, Pirates. I get far too many of his cards. I'm shocked that he was able to avoid me for so long. 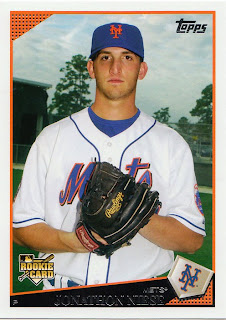 Jonathon Niese, Mets. Mets fans like this guy. The back of this card spells the town in which I spent 15 years of my life as "Binghampton." It's not "Binghampton." You don't know how much that annoys people who live in "Binghamton." Why must people put a "P" in that name? Listen to the sounds that come out of people's mouths when they say the word "Binghamton." You will never hear a "P" sound. So start spelling it right. 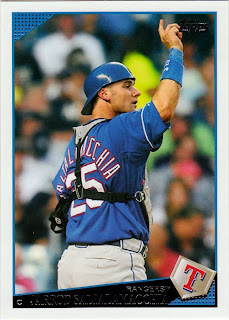 Jarrod Saltalamacchia, Rangers. A uniform-stitcher's nightmare. I'm waiting for someone to say that he has hit more home runs in major league baseball history than anyone else who has 14 letters in his last name. 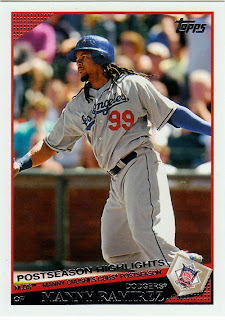 Manny Ramirez, Postseason Highlights. Yeah, I forgot I needed this card. Between the Topps black and the throwbacks, I thought I had the regular card already. Nope.
Many thanks, Scott and Peter for coming to my rescue. I can move on to Series 2 without looking back.
Finally, I received my prize for doing well in Grand Cards' guessing contest. I think I finished second, but the gracious folks at Dinged Corners allowed me to pick first. Super nice of them. So I ended up with this: 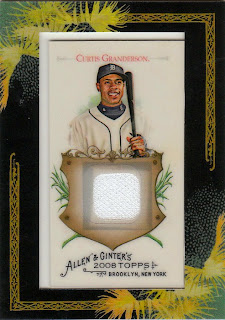 How about that? Dan, the Granderson collector, giving away a Granderson relic. Thanks Dan!
I have way more relic cards from 2008 Allen & Ginter than any other set. I think this the 13th one. Maybe not all that impressive, but it is for me.
So, there you are. Even writing this post made me forget the fiasco at work. I don't think I have ever heard the phrase "I'm sorry" more times in one week than I did last week.
But cards, they never say, "I'm sorry."

nymetsfan said…
I know exactly how you feel about the mispronunciation of Binghamton. I feel the same way when people say that the Rays are from Tampa. No. They are the Tampa BAY Rays. In fact, the play in St. Petersburg! I'm off the box now. Go B-Mets! Hang in there, Night Owl.
May 24, 2009 at 10:21 PM

steveisjewish said…
Hey man - keep your head up at work - and thanks for the soapbox about Binghamton - I hate that P very much. the only thing worse is when people (and I have heard this) call it "Bling-Blinghamton"
May 24, 2009 at 11:41 PM