May 18, 2009
(Apparently, we should be appreciating our relatives today, because it is "Visit Your Relatives Day." It's making me feel particularly guilty because today is my brother's birthday, and I can't visit him. Something about work getting in the way. Sorry, buddy. But instead, I'll appreciate some baseball cards in your honor. This is the 31st in a series): 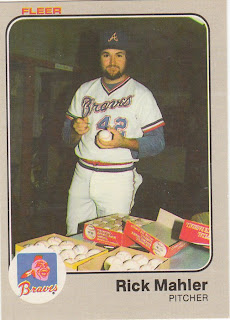 What do you think Rick Mahler is about to do in that dungeon of a locker room with that baseball?

Is he about to autograph just that one? Does the photographer want you to think he signed all of those balls in front of him? Or are these all props and Mahler isn't going to sign a single ball unless he sees cash up front?

Fleer was the first card company to provide photographs that showed you the everyday world of a ballplayer. Granted, a lot of those photos were difficult to view because they were either blurry or dark, but the idea was there. Later, Upper Deck took that idea and ran with it. Then they jumped the shark with it. But Fleer, at least to my knowledge, was the first.

After years of seeing ballplayers look to the sky, or pretend to cast off a mask, or freeze in mid-pitch follow through, we finally saw players as humans, laughing in the dugout, sitting at a locker, signing baseballs.

Rick Mahler was a fairly reliable pitcher for the Braves in the 1980s. He won 17 games one season and was the team's opening day starter on five occasions. He died of a heart attack at age 51 in 2005 while working as a pitching coach in the Mets' minor league organization, leaving behind a wife and five children.

I wasn't a fan of the Braves in the 1980s (well, I've never really been a fan, and geez, I've featured Braves on back-to-back cardboard appreciations. Yikes). But I can appreciate Mahler for his contribution in the attempt to show the human aspect of ballplayers on a baseball card.

We know now that ballplayers are all TOO human. But it was a unique concept at the time.

Kevin said…
Rick is one of a handful of players who share my birthday (August 5). Another such player is Nellie Briles, who unfortunately also died too soon.
May 18, 2009 at 12:06 PM