May 05, 2009
I am waiting impatiently for the Dodger game to start. Tonight's the night that they go for the major league record for most consecutive home wins to start the season. If they beat the Snakes tonight, they'll have won 12 straight. First and last team to do that was the 1911 Detroit Tigers.

Those were the Tigers of Ty Cobb and Sam Crawford. It's been a long time, people!

So, while I'm waiting, I thought I'd keep my mind occupied on something else. Let's talk about another first-place team, the Toronto Blue Jays. I hope they keep it up. I mean, I've always liked the Red Sox, but there's nothing I'd like more than to show people that teams other than the Yankees and Red Sox can win the AL East. The Rays did it last year. It'd be nice if the Jays could make it two in a row. Then maybe we could stop hearing about how teams buy championships. (My thoughts: sometimes they do, sometimes they don't. It's not an absolute).

But I'm going back to the very first Blue Jays team here. The expansion team of 1977. Oh, what pains in the bum that team was to Topps. The expansion draft, players switching teams, the intricate logo. Topps had to airbrush everyone into Blue Jays caps. And they just couldn't get that logo right in its '77 cards.

So what I'd like to do is look at a few examples of the painted logo in action. For those who want to play along, tell me which is the WORST-looking logo of the six examples. 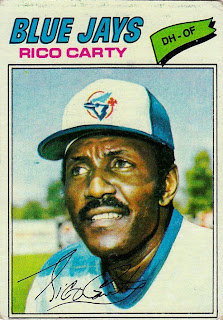 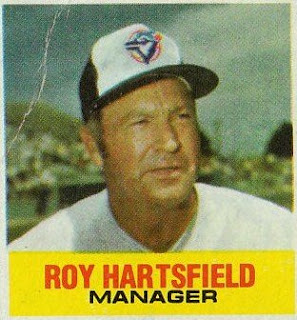 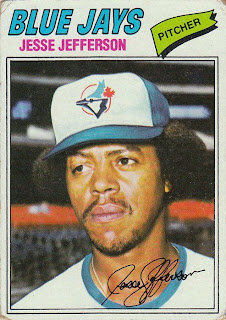 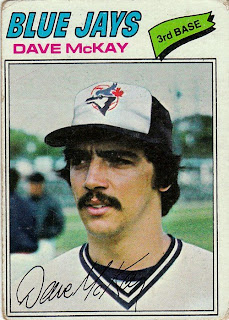 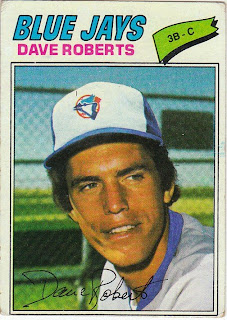 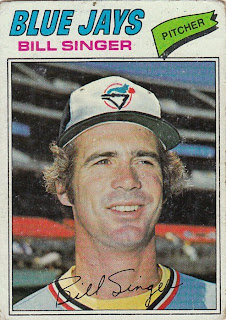 F) Bill Singer
And if you're distracted by the wonderful 1970s fashions, I've cropped the cards down to just the logo. Same order as before:

F) Singer
My personal favorite is Jefferson. The Blue Jay has a hairstyle!
There is no prize for your guesses, although I reserve the right to make a post out of them.
However, there is a contest coming with the next post. That will be after the Dodger game tonight. I know that's after many of you have hit the sack, but don't worry. It's not critical that you enter early.

He could have at least searched for something in his middle drawer that went with the Jays' colors.

Dubbs said…
Okay, I did a bit more digging. I says to myself, I says "Maybe it's an airbrushed hat", and sure enough, in '76 he played for Minnesota. That would explain the red and black trim on his jersey.

Jeffrey Wolfe said…
As a closest fan of the early Blue Jays and Mariners this post warmed my heart.
May 5, 2009 at 8:48 PM

Matt Runyon said…
Jesse Jefferson must have been in a great mood when that picture was taken
May 5, 2009 at 9:17 PM

Tony said…
The Canadian 1977 OPC set had the Blue Jays in their proper uniforms. Apparently the photographers for OPC took their photos at spring training.
The cards look a lot better than the Topps cards. Many cards in the set had different poses from the Topps set, although the OPC set was much smaller.