Clap for the Wolfman 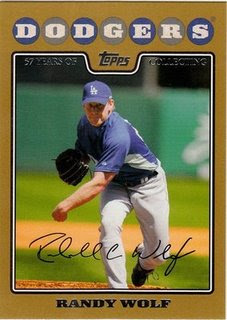 Thank goodness Randy Wolf hasn't bought into the "After Manny" B.S. I'm so sick of hearing that garbage. Did you see his pitching performance Wednesday night? That's how you respond to endless talk about your team losing your top hitter for 50 days.
Good for you, Randy. Way to shut up the idiots who bring up after every single loss that "the Dodgers are now x-x since Manny Ramirez's suspension." Good God, what a simplistic way of looking at things.
Sure, Manny is a great player. And he can help your team play at a much higher level. But he's not Michael Jordan and this is not basketball. It takes more than one player to elevate a team for an extended period. And the Dodgers aren't the 1950s Pirates with Ralph Kiner and no one else. The Dodgers actually have decent players on their team aside from Ramirez. Even without Ramirez, they're better than anyone in the NL West, with the possible exception of the Diamondbacks, who haven't been able to get out of their own way this season.
Yammering TV heads, you just need to shut up about Manny already. Just shut it. Your point isn't all that relevant. It's been beaten to death. It's simplistic. Find a topic with real substance and stop featuring Manny's picture every time you come to the Dodgers highlights. Also, you can stop asking "when will Manny meet with his teammates?" You know what? I don't care when he will meet his teammates or if he ever does. You know why? Because it doesn't have a DAMN THING TO DO WITH WINNING BALLGAMES. Manny's not playing. REMEMBER?
Stop turning sports into an endless soap opera. The drama is artificial. It's a creation of nonstop babbling and a desire to create a story that isn't there.
So everyone can just shut it. And ESPN? You can shut it most of all. And then you can shut it again. And when you're done with that, you can shut it some more, you useless shell of your former self. Go broadcast some poker.
OK, I'm going to calm down now. Here, listen to some classic early '70s music. See you later.
Thanks again, Randy.

deal said…
Wolf will always be a house favorite in the Phungo household. The game wasn't much fun for us to watch but it was good to see Randy do well.