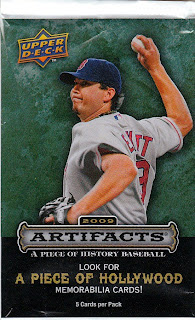 I may be a bit vocal about the card brands I don't like, but the truth is, I'll try anything once when it comes to buying packs. I can see all the cards I want on the blogs, but I don't make a final determination until I see them in my greedy, grabby hands.

So that explains why yesterday I bought loose packs of two 2009 sets that I have no interest in collecting: Piece of History and Goudey. And you will be shocked to hear that I was pleasantly surprised by one of the packs. 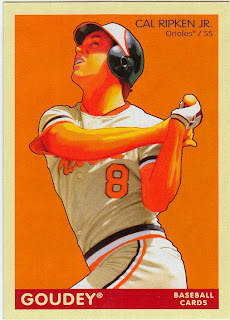 Lordy, what a disaster this card is. It's an instant candidate for Worst Card of 2009. This is candidate No. 4. Cal is somewhere in that painting, but you've really got to look. The orange background reminds me of burning wildfires. And Ripken's glowing orange arms are much more disturbing in person.

I know people have said '09 Goudey is a faithful recreation of the original Goudey set. I don't care. My point is: let's have Upper Deck faithfully recreate a set that doesn't suck. Then I'd buy more than a pack of the stuff.

So, that means, clever deducers, that the Piece of History pack was the pleasant surprise! How about that? I'm as stunned as you. Let's see what we've got: 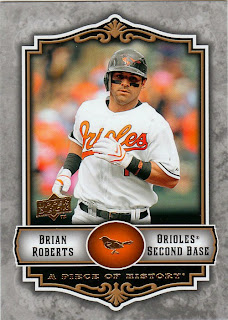 First, another Oriole, Brian Roberts. The poor guy has suffered a lot with this team hasn't he?

I do like the look of this year's POH more than last year. The gray still puts me too much in the mind of tombstones, but the design is an improvement. 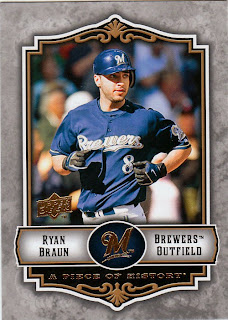 A much better card of Ryan Braun than his Topps offering (Worst card of the year candidate #1). 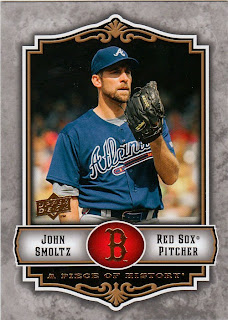 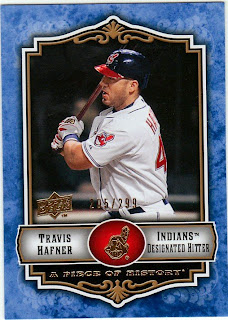 Here's where it gets good. A very cool numbered parallel of Pronk! Between POH and Heroes, Upper Deck has got the formula down pat of issuing dull-looking base cards and then wowing you with a parallel just because it's a pretty color. 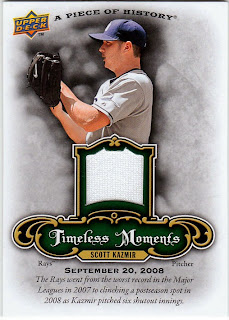 The surprise inside: a relic card of Scott Kazmir. Cool. I can count the number of relics I have pulled from loose retail packs on one hand. In fact, I can remember only two other instances. 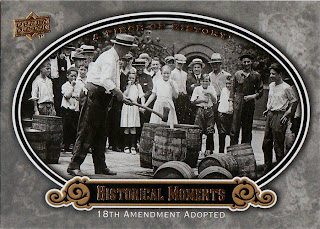 And to celebrate, we have a card commemorating prohibition! Woo-hoo! I'll drink to that!
These Historical Moments cards bite, but I actually like this particular one. It's a nice way to end a pack that could end up as one of my favorite pack openings of the year. Really. Piece of History. Who knew?
(FYI: Almost all these cards are earmarked for bloggers. I'm keeping the Kazmir, unless someone has a Dodger relic to offer).

Mark Aubrey said…
The Prohibition Card? That's actually golfer Bobby Jones preparing to hit a trick shot off of a keg with an axe.

Goose Joak said…
Everything you said, plus it looks like Cal is making an out (lazy fly ball or pop up). I could understand if it were Neifi Perez, but this is Cal Ripken :)
May 21, 2009 at 3:02 AM