How I knew the end was near

May 22, 2009
There are a lot of reasons that collectors give for why they got out of the hobby. The cards became too expensive. There were too many sets or too many variations.

The process was gradual, I think, because there wasn't one major issue I had with cards then. Just a whole bunch of minor issues that added up to the major issue of me not shelling out any cash on cardboard anymore.

One of the minor issues is one we all know and love: the senior picture disguised as a baseball card: 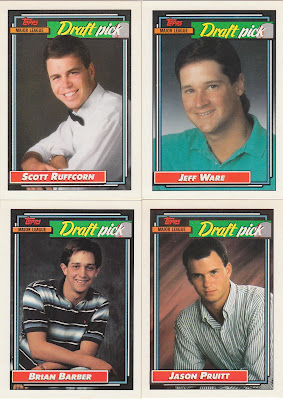 1992 Topps, how I hate you. I cannot stand the fact that I have these four cards in my collection. I'm embarrassed. I almost weep from the sight of them. I wish they would just vanish forever. I will never collect the entire 1992 set, because I don't want any more of these things. And it doesn't help that none of the four amounted to much in the major leagues.

What in the name of Kirby Puckett was anyone thinking when they produced these cards? If I were to sacrifice any cards in my collection, these four would be the first ones I would pick. Here! Take them! I don't ever want to see them again!

So how did I know the end was near in my first collecting phase?

--David said…
I'd love to know the copyright process for those. I can't even print mine at Wal-Mart without the Intellectual Property police showing up. Can you imainge the convo?

Topps: "Yeah, we'd like permission to use your professional photo on our baseball cards"

steveisjewish said…
you can totally tell that Brian Baerber was a total tool in high school
May 22, 2009 at 10:14 AM

Motherscratcher said…
Wow, I didn't colect any 1992 so I had no idea that these existed. There is absolutely nothing redeeming about those. Nothing quirky or interesting. I was better off before I read this post.

Now, I'm thinking about dropping the whole collecting and blogging thing again. If no one ever hears from me again it will be all your fault Night Owl.

Mark Aubrey said…
I thought that the end was near when I saw Manny actually chasing down a flyball, catch it then turn and make the throw to second when he was still in Boston.
May 22, 2009 at 5:16 PM

Dinged Corners said…
These go beyond the "Worst Card Ever" category into unchartered territory. I'd be completely depressed by these cards if, just as I finished reading the post, the 11 quail that live in our front yard hadn't bobbingly crossed our portal and peeked in the doorway window near where I typed this. In other words, seeing these cards requires some kind of outside intervention for your spirit to survive.
May 22, 2009 at 5:52 PM

Jeremya1um said…
I actually like the set. It was the first set I remember purchasing packs of with my own money. I am trying to get the whole set autographed, in fact. I have 430 of the 813 players in the set done (52%). Including some of the cards with the senior pictures.
May 22, 2009 at 6:10 PM

Tony said…
Yeah I stopped collecting around the same time. Too many sets. I got sick of seeing 8 versions of the same card. I didn't need a gold foil stamped, chrome plated Refractor, numbered to 50,000. It seemed like the card companies were putting a photo on cards of anyone who knew the WORD baseball. Brien Taylor where are you now??
May 22, 2009 at 8:17 PM