Thanks for putting up with me 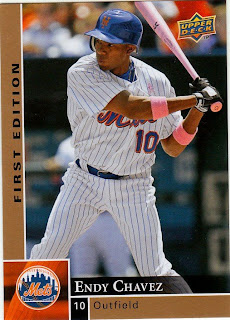 I was watching the Mets game this afternoon, looking at the players stride to the plate wearing bright, pink wristbands and swinging bright, pink bats. It's been the tradition on Mother's Day the last few years.

The Mets' play-by-play announcer, Gary Cohen, remarked on how many more mothers were at the ballpark on Mother's Day than when he was a kid. He noted that it had become a tradition to bring your mom to the ballpark. But, he said, it wasn't always that way. I had noticed the same thing. When I was growing up, I didn't know one single adult woman who was interested in baseball.

My mother has sat through hundreds of baseball games over the years, but none of those games were in a ballpark because we could never get her to go. Instead, she saw baseball on television or heard it on the radio as her three baseball-crazed sons found a game every chance they'd get and in any way possible.

To this day, when I visit her or she visits me and she sees a game on TV, she'll utter a single word. She'll say, "baseball" in this certain tone. It's not a derisive or loathing tone. It's more a resigned tone. "This is my son. He loves baseball. God knows why."

As many games as she has viewed peripherally over the last 30-plus years, I couldn't tell you if she knows the name of a single player. The game never comes up in conversations with her, and I have never even heard her utter the name "Hank Aaron" or "Roger Clemens" or any other insanely famous ballplayer.

I sometimes think about how cool it would be to have a mother that was into baseball. And then the next thought is how weird that would be. Because that isn't what I know to be a mom. To me, a mom is someone who says "baseball," sighs, and then goes about her business.

Thanks for putting up with me, mom. With us. Happy Mother's Day.

beardy said…
My girlfriend's mom is baseball OBSESSED! She loves going to games, and works at the Babe Ruth Museum. At first I thought it was weird, but now, after arguing the finer points of the game with her for 3+ years, I sort of think it's cool. She also loves Mike Mussina, but I'll let that one slide.
May 10, 2009 at 7:28 PM

The Mojo Hand said…
Good story. My mom is the same way. I can totally relate.

MarieBay said…
My mom has been dragged to plenty of Yankee games, though dragged is not really how it went. She likes going, but doesn't like sitting in my seats because they are uncomfortable (bleacher benches). She knows mostly all Yankees, and so does my grandmother (who was just saying to me today that she wishes the Yankees had Tino, Paulie, and Bernie back- so do I, I said).
May 10, 2009 at 8:46 PM

Erin said…
My mother is a rather avid baseball fan. When winter rolls around ... she complains about the lack of baseball. When spring is near, I start to hear "When is Opening Day?" over and over. When she finally sees her first baseball game on t.v., she rejoices. During baseball season, if a couple days go by without seeing a game, she comments that it seems like it's been FOREVER since she's seen the Astros. (That is her team -- horrible as it sounds ... blah!) To her, winter = no baseball. For this, she is sad.