Um, Clayton, thanks, but no thanks 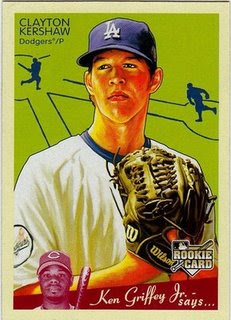 So, I was talking to Clayton Kershaw the other day. I was telling him how I had signed up with the Wax Heaven directory as the designated Clayton Kershaw collector. Any Kershaw card that Mario pulled would go to me.

Well, I said, it's nice and all, very generous of Mario, but it's getting off to a rough start.

Clayton gave me the eye. "How's that?" he said.

Well, the first card I received in the mail was damaged, I said. It was a relic and it came out of the envelope with a crease. 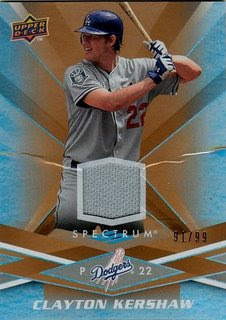 Yeah, it does, but I've written about that already. It was kind of my fault. I sent down a plain, white envelope as the return envelope, and you really shouldn't do that with cards. The post office apparently makes paper airplanes out of those things.

Um, not really, I said. What's great is out of two more box breaks on Wax Heaven, two more of your cards were pulled.

Yeah, but I haven't gotten either of the cards yet, I said. 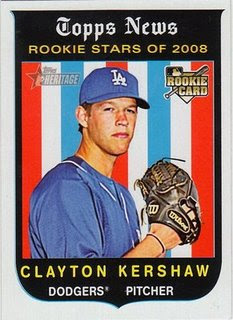 Clayton gave me the eye again.

Um, well, this is a good one, I said. You'll laugh at this. I provided a bubble mailer this time. Both times, in fact. But each time, like an idiot, I forgot postage on the return mailers.

Totally, Clayton. Totally my fault. I don't know what I was thinking. My brain shorted out. I'll be sending out yet another mailer, this time with proper postage.

Clayton paused for a moment. Then he said:

"Still no-hitting them," he said.

And that was that.

Well, as you may have heard, Kershaw no-hit the Marlins for seven innings Sunday. Then, I guess he realized that I was right. It wasn't anyone's fault but my own. So he gave up a double to ex-Dodger Cody Ross in the eighth inning.

Still got the win though. Still pitched amazingly. And it's nice to know that he'll go to those lengths for a Dodger fan.

steveisjewish said…
still no - hitting them

Play at the Plate said…
Absolutely brilliant and hilarious. I've only just discovered the world of "card" bloggers, and have been reading all of your posts...working my way up to the newest stuff and this is great.
July 10, 2009 at 4:15 AM