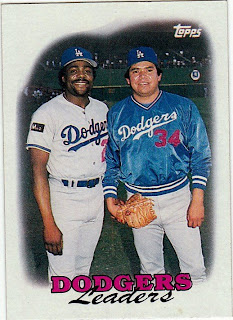 I keep hearing about how the Dodgers have the best record in baseball, and for weeks now I didn't want to acknowledge it. They had spent all of April beating up on the atrocious National League West competition, and I wanted to see how they did once they got out of their division.

Then they won 2-of-3 from the world champion Phillies, 2-of-3 from the Marlins, and just finished sweeping the Mets. I think it's time to realize that Dodgers are here to stay.

Granted, it's only May 21, and an interleague series is coming up this weekend (the Dodgers crumble in interleague play). But I think the team will be all right.

I mean, so far, they've dealt with the loss of their top hitter, the loss of their opening day starter, other assorted starting rotation issues, even more relief pitching issues, a sudden slump by their top RBI guy, a shortstop hitting .230, and a prolonged hitting malaise by their starting catcher.

But they're still 8 1/2 games in front in the NL West because of exceptional play from players like Orlando Hudson and Juan Pierre, and key contributions from role players like Mark Loretta and reliever Brent Leach.

It does remind me of 1988 when Mickey Hatcher and Jeff Hamilton would come up with key, unexpected hits and they'd get quality relief outings from guys you've never heard of, like Brian Holton. And the Dodgers have their largest lead since that 1988 season when they won the World Series.

So that's the reason for the 1988 Topps night card up there, featuring two players who had nothing to do with the 1988 postseason. Pedro Guerrero was traded for John Tudor late in the season. Fernando Valenzuela had arm issues all year and wasn't even on the postseason roster.

That's kind of like if Topps issued a 2009 team leaders card for the Dodgers and featured Jeff Kent and Derek Lowe.

Let's hope I can draw a few more connections between '88 and '09 as the season continues.

night owl said…
That's interesting. I'm not sure. I'd have to pick a longtime veteran, and there aren't a lot of those players on the Dodgers this year, who are power hitters anyway.

Jeff Kent would have been perfect for the role given his crankiness. Casey Blake isn't cranky, but he hits homers. And he's all baseball all the time, like Gibby, so I'll go with him. (But he better not get hurt!)
May 21, 2009 at 2:41 PM