Questions (but will there be answers?)

May 28, 2009
I have lots of questions about cards. Most of them are mundane and probably not worth answering. But these are the kinds of questions that hound me until I get an answer, so hopefully someone has one. 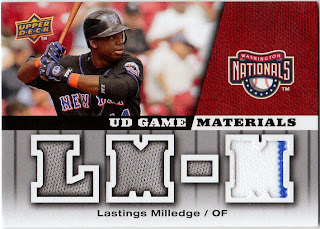 Question 1: I bought a blaster of Upper Deck Series 2 today, mostly in the quest to try to snare as many Dodgers as I could. However, I turned up zero Dodgers and a case-load of Mets, which does me no good but probably helps a bunch of bloggers out there.

The question is, does this qualify as a Mets card? It was the guaranteed relic card in the box. Milledge is now a National (or minor leaguer or whatever he is now). But the jersey bit, with the cool stripey line, is obviously a Mets jersey. When I am classifying such cards in my team binder, I always go with what team is listed on the front. In this case, this would be a Nationals card. But the jersey is so apparent. So, Mets fans, is this a Mets card? A Nationals card? Or do you whip it across the room in disgust and let the dog chew it to mush? 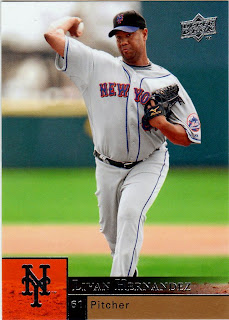 Question 2: It also involves the Mets. Here is an Upper Deck Series 2 card of Livan Hernandez. The back of the card claims he's 34 years old. I am officially stifling a guffaw over that factoid.
But that's not why I'm showing the card. Note the logo on the front. It's the interlocking N and Y logo that's on every Upper Deck Mets card I've seen this year. 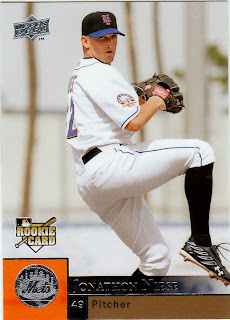 Except for this card of Jonathon Niese, which features the familiar city skyline logo for some reason. I'm assuming that UD just messed up and put this logo with Niese's card only. I seem to remember seeing it on a blog somewhere. But there's that tiny part of me, the part that thinks it's still 1982 and that there's gold in any error that's found on a card, that hopes this is some rare version of Niese's card.
So the question, and I already know the answer: Do all of Niese's UD cards have the skyline logo? 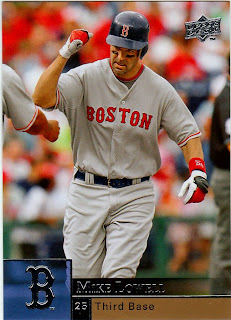 Question 3: More Upper Deck logo musings. Here is the reliable Red Sox masher Mike Lowell. A guy you just cannot dislike. I hope Yankees fans can at least tolerate the man, like I tolerate Jeter.
But note the logo. There is the blue background that fills the square and you can see the photo is tinted blue in the square. 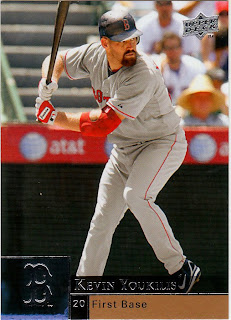 OK, here is the Upper Deck Series 2 card of Kevin Youkilis, a guy Yankees fans very much dislike. I can see their point. But a team that features A-Rod, Teixeira and a few others has the market cornered on unlikeable players.
But again, look at the logo, if you can see it. The blue background tint is missing, except for the very bottom, in which the blue tint highlights the ground and part of Youkilis' foot. It seems they forgot to fill in the rest of the box. So the question is: do all the Youkilis cards look like this? My guess? You bet. 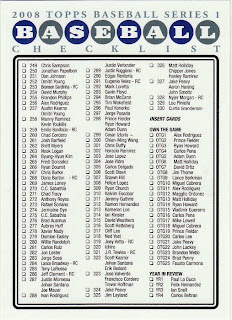 Question 4: OK, last one, and it's going back a year, and -- I am not joshing you -- it's a question about a checklist. (Yeah, sure, go back to watching your ballgame if you want. I don't blame you if you're bored over checklist talk. But this is important to me!)
This is a checklist for 2008 Topps. It is the 2nd of 3 checklists for Series I. Note the blue and gray circles at the top of the card. We've all seen them. About 8 billion times. 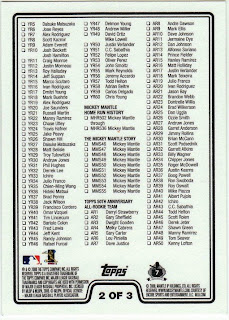 This is the back of the checklist. Thrilling, huh? The back of the card starts with a Year in Review card, Y5 Daisuke Matsuzaka, and ends with a 50th Anniversary All-Rookie team card, AR50 Kenny Lofton (click on the image if you can't read that). 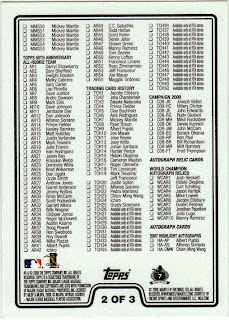 OK, so explain this to me. This also is the back of a 2008 Topps Series I checklist, No. 2 of 3. But note the first card and the last card. The first card is from that ghastly Mickey Mantle Story insert set, MMS50, Mickey and Billy Martin get in a bar fight (OK, I made that up, but it'd be cool, don't you think?). The final card is from the Autographed Cards list, Chien-Ming Wang (I love it when they run a checklist of autographed cards -- like collectors actually have a shot at filling the entire checklist of autographs).
So, the list isn't the same as the first checklist, even though both are the 2nd of 3 from Series I. 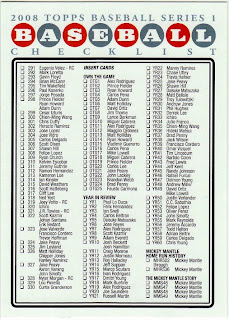 Here is the front of that checklist. Note right off the red and gray circles, instead of the blue and gray circles. And the checklist starts with 291, Eugenio Velez, and ends with Mickey Mantle Story, MMS49.
What's the deal? Is this some variation checklist? I've gotten different-colored checklists from hobby packs, but the listing of the cards has always been the same. And I got this card out of a retail pack.
Yeah, I know, it's a checklist, who cares. But this has been bothering me for an entire year. Hopefully, someone can clear it up, so I can remove the question from my brain forever and fill it with some other piece of worthless minutia.

Anonymous said…
I'd count the Lastings Milledge card as a Mets card & a Washington Nationals card. If you're pictured in my team's uniform, you count. If the card claims you're part of my team, you also count.

Captain Canuck said…
when I come across Braves cards like the jersey card in question, he would be considered a National, and not part of my team set.
However, if he was one of my favourite players, I would still grab one for my Braves Player box(es)

dayf said…
1) Both Mets and Nats. I have a few Glavine relics where he's in a Mets uni on the card and the jersey is obviously a Braves jersey. I sneer at those cards a tiny bit but they're still Braves cards to me.

2) The Niese card is the only one I've found with the skyline and there isn't an NY version out there.

3) Youk's background is dark so the only place the blue shows up is on the lighter ground. The color is supposed to look translucent or whatever so a dark backgorund will screw up the color. (you can kind of see it in the Lowell card too)

night owl said…
You are correct about the Youk card. I guess that's why you're the commish!

The red and gray checklist I got did not come from a hobby pack and the vast majority of the blue and gray checklists came from retail -- in fact I don't think I bought any '08 Topps hobby packs. So I'll have to take a closer look and see if I can figure it out. Maybe it's a jumbo pack checklist.
May 28, 2009 at 11:37 PM

AdamE said…
I was pretty sure I had a couple different Mets with the skyline but I am not sure because I sent them all to Dinged Corners at the begining of the month. Maybe they will read this and respond.
May 29, 2009 at 12:24 AM

Motherscratcher said…
1. Nats card. Although, If you're a fan of ALstings that doesn't mean you shouldn't get it. Just like Thorzul picking up CC Yankee cards if he is in his Brewers Uniform. It's still a Yankees card.

3. What Commish said (How great is it that people are now calling Dayf "Commish". What a fantastic nickname. Almost as good as T-Bone.

4. No Idea on the checklist, but that would be a great Mickey and Billy card. Another good one would be "Whitey Ford Finds Mickey Under His Usual Table."
May 29, 2009 at 1:18 AM