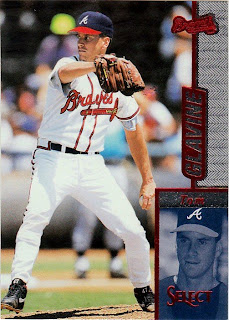 I know I've talked about watching my card budget and buying 2009 cards like UD First Edition. That's all lovely for current cards, but there is no beating what I find at this dollar store, at least among your retail options.

I've developed a strategy for my trips to the store. I know what bags hold the football and basketball cards, which I don't want. And I've struck upon just the right "shaking" strategy to make sure I don't end up with this anymore. I suppose you could consider this "pack searching," except I don't harm any of the cards doing this or open the bags either.

Today I bought six bags for 6 bucks plus tax. I ended up with no non-baseball cards and I counted maybe a dozen doubles out of 210 cards. And I loved what I found. I hope this store stocks this stuff for a long time because I might enjoy this more than busting blasters of current cards. It is so cool.

Oh, and some bloggers will benefit because some of the cards are headed out in trades. I've already packaged a few up, and I have six or seven more going out next week (with a few more after that in the hole).

So let's see what some of my favorites are: 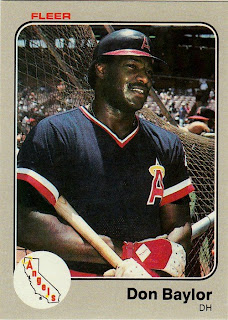 I'll start with one of the oldest, a 1983 Fleer card of a sweaty Don Baylor. The early '80s was a great time for photos of sweaty athletes. Yes, that is a future post.

Like I've mentioned before, the cool thing about these cards is not only are you getting them cheap, but not a lot are from the era of overproduction (1987-93). There are some from that period, but you can find stuff as early as 1980 if you search. 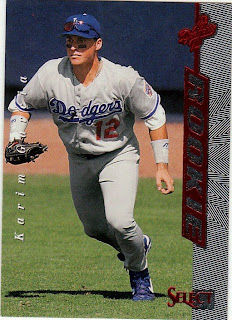 And I bought several mid-1990s cards, because I collect very little then. I found a handful of Dodgers I didn't have, including this 1997 Select Karim Garcia, card companies' poster child in 1996 and 1997. 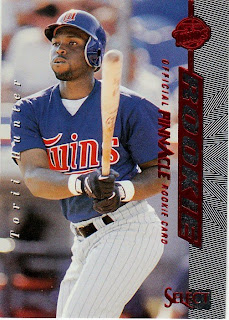 And this is a nice early Torii Hunter card from '97 Select. It's "an official Pinnacle rookie card," whatever that means. But I know it's not Hunter's true rookie card. Thank goodness for Bad Wax. It saves an awful lot of research on the rookie front. 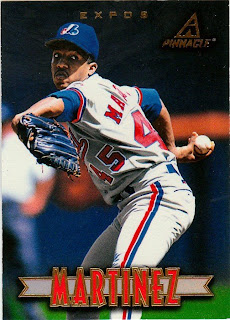 I found a fair amount of 1997 Pinnacle. This is New Pinnacle, I'm told, not Certified, which Mario likes quite a bit. Perhaps you've noticed. I'd link to some of Wax Heaven's Pinnacle posts, but there are just too many of them. And if you're reading here, you're reading there, so you know what I'm talking about.
Yet, before today, I never knew what Mario was talking about because I wasn't collecting cards in '97. Now, after seeing the mere base cards in hand for the first time, I agree 100 percent. These are some very nice cards. 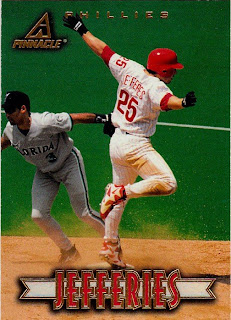 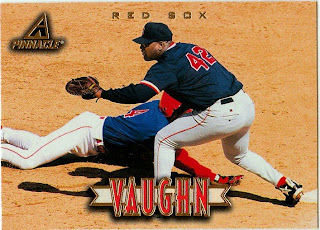 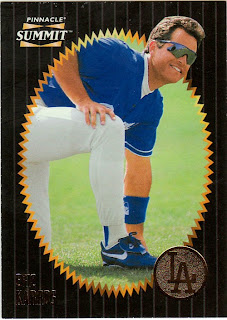 Staying with Pinnacle, here's a 1996 Pinnacle Summit card of Eric Karros that I didn't have. Not a great photo, though. 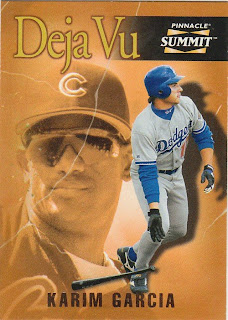 And this is an insert from 1997 Pinnacle Summit. This is considered a Garcia card even with a great big mug shot of Sammy Sosa. Go with it. They tried really hard to connect Garcia and Sosa on the back of the card.

And I have no idea if this is Mike Cameron's real rookie card. I doubt it. But it's late, it's the weekend, and I'm not looking it up. I already did that with Hunter. I've done my time. 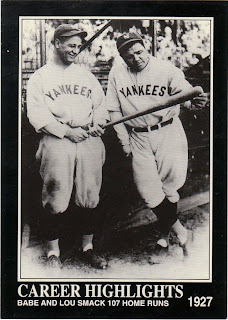 Among the cards were several from the Babe Ruth Collection set from 1992. I'm guessing that, like most sets from the early 1990s, this one was as available as oxygen. But that doesn't stop me from enjoying photos like Ruth and Gehrig here.
Or this classic shot of the Babe with George Sisler and Ty Cobb. Apparently this was taken at the 1924 World Series, but none of them were in the Series. 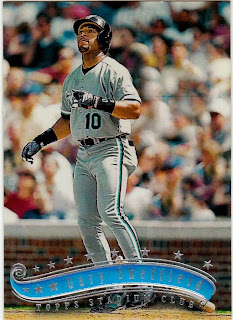 A couple more beauties from 1997. Here is Sheffield watching a blast at Wrigley Field on a Stadium Club card. 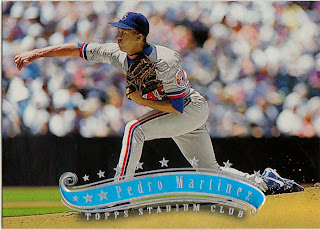 And another card of Pedro, when he was at his dominant best with Montreal. I am quite happy that I picked up cards of Martinez and Garcia today since one of my favorite Pedro quotes is his "Who is Karim Garcia?" quote. 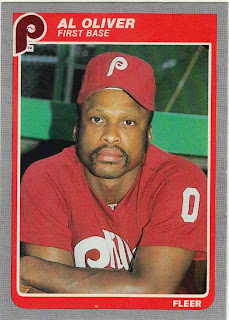 Back to some earlier cards. Here Al Oliver is showing his arm scar on 1985 Fleer. 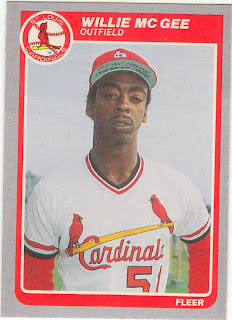 I don't know what Willie McGee has written on the underside of his cap, but I know it says more than "McGee" on there. 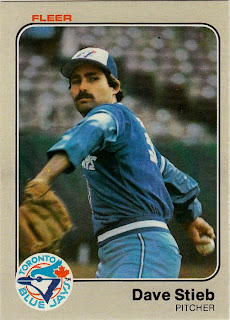 I started with '83 Fleer and I'll end there. I'm not sure what Stieb is wearing under his uniform top, but his right arm looks like he forgot to take off his painting clothes.
There you go. I think that puts my First Edition Fridays to shame.

Matt Runyon said…
Garcia was supposed to be the greatest thing since sliced bread, but he never really panned out. At least the Diamondbacks were able to get Luis Gonzalez for him.

night owl said…
As someone who didn't collect in the mid-to-late '90s, the insane number of sets during that era often confuses me. Thanks for clearing it up.
May 10, 2009 at 7:16 PM

MMayes said…
I'm pretty sure what's written on the underside of Willie McGee's hat was written by Whitey Herzog (to no avail):