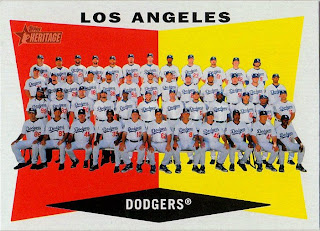 I don't know how to react to this news about my team. I write so much more easily when they suck. But the Dodgers sit a healthy distance from suck. They have the best record in baseball. They just set a franchise mark for winning their first 10 games at home. And they've made the rest of the NL West their poor, pathetic bitch.

I don't remember a start like this by the Dodgers since 1977, when my favorite player of all-time, Ron Cey, set a record for RBIs in April with 29 and L.A. went 17-3. I was a beaming sixth grader back then. The Dodgers were perennial postseason contenders, and I was new to baseball. I didn't know how good I had it.

But after so many mediocre seasons, this is so different, although not entirely unexpected. Many Dodger fans may remember the 2005 Jacksonville Suns. They were the Dodgers' Class AA team, and they were named Baseball America's team of the year. I don't follow minor league teams as much as I should, but I took notice of this team. As early as four years ago, I knew something like this might be coming.

Next up: 1918. The Giants finished, you guessed it, second that year. They were 10.5 games behind the Cubs in the National League. Finally, the 1911 Tigers. They finished SECOND, TOO, 13.5 games behind the Philadelphia A's in the American League.

Geez, does that mean the Dodgers will finish second this year? ... Nah. You've seen the National League West this year.

... OK, now on to what you're really wondering: what's with the new look?

Well, I've been meaning to change my template for a long time. It's not that I didn't like the old one. It's just that it was so formulaic -- start a blog, pick a template, give it a few tweaks and there was Night Owl Cards. This isn't any artistic masterpiece by ANY means, but at least some effort went into it. It's me.

The sloppy art work is my amateurish-yet-earnest foray into MS Paint. I'm sure it could look better. But for now, it works for me. The cards that I selected all have meaning to me, whether it's a Dodger card (Wallach and Maddux), two of my favorite Dodgers (Cey and Hershiser), a favorite set ('72 Topps, '93 Upper Deck) or a favorite card ('81 Donruss Billy Martin).

The template look was an attempt to keep the "night owl" mood, the combination of night with the orange glow of a lamp or candle or street light. But I also wanted to make the type readable. I was very conscious of people possibly being unable to read the white-on-black type of the other template (I strain a little bit to read other blogs that have chosen the white-on-black layout -- although not so much that it's a problem).

So that's the thought process behind the new look. I hope you like it. If you don't, please let me know in the comments or otherwise. I'll see what I can do to correct it. And if you do like it, please leave a comment that will make me feel warm and fuzzy.

And to those of you who think the blog colors look too much like the hated Giants, I have two things to say to you: first, you'll notice that blue makes a healthy appearance in the blog layout. Secondly, the Dodgers are 10-0 at home this year. You can't hurt me.

Nachos Grande said…
I think I like it quite a bit better than the white on black text from before! Good work... I've flirted with the idea of changing my blog layout and color scheme but I've been too afraid that I wouldn't like it and everything would be messed up! It looks like you were successful in your attempt though, so good job!
May 4, 2009 at 1:13 AM

Matt Runyon said…
I don't think the Dodgers have much to worry about in the NL West this year. The Padres are on their way back to where they belong (4th or 5th place), the D-Backs are struggling with injury and consistency problems, and the Giants don't have enough offense to challenge.
May 4, 2009 at 9:11 AM

Dinged Corners said…
This looks both professional and happy, like a blog creamsicle.
May 4, 2009 at 4:04 PM

beardy said…
The new layout looks great, and Ethier has been killing it for my fantasy team this year. Glad I drafted that guy!
May 4, 2009 at 8:50 PM