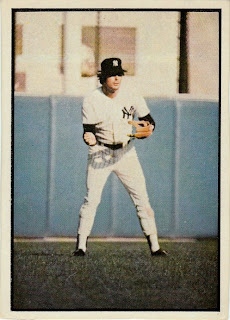 This is the first week in six months that I have not received a single card package in the mail. There are a couple of reasons for this.

One is I have been trying to catch up with the cards I have obtained recently -- organizing, filing, etc. -- so I have initiated very few trade talks. The second is I'm waiting on a handful of packages to arrive. Some are en route, another one is tied up in another trade, and three or four are out there in the stratosphere somewhere. With a couple of those, I have no idea if they will ever come home. But that's cool. Life plays some strange tricks and card collecting fades into the background like a child's stuffed toy.

Plus, I'm sure there are a few people who are wondering the same thing about cards I agreed to send them. I'm assuming my scattered brain has lost track of a trade or two. I hope people will let me know if I have.

But the trading hasn't totally come to a halt. I am working on four or five trades at the moment. I am days away from sending out packages to a couple of other people who are overdue to receive cards from me. And I have a week off coming up. It will be the perfect time to initiate some blog trades. I have a list of folks I plan to either contact or send cards to over the next two or three weeks.

Until then, I'm like Lou Piniella standing in the outfield. Waiting. Patiently waiting ...

beardy said…
Have you been able to stash away any Orioles for me? I keep pulling Dodgers, and have some cards for you for the next go-round.
May 2, 2009 at 2:07 PM

night owl said…
Yeah, I have a stack for you. I was waiting to pull something great O's-wise, but have struck out so far. I'm giving it another week and then I'll send them out.
May 2, 2009 at 2:24 PM

--David said…
Heya! I'm in the same boat - I have several folks waiting for cards from me. Hopefully I'll be able to cull those packages together this weekend!
May 2, 2009 at 3:39 PM