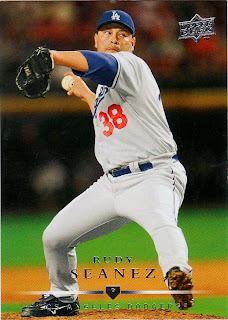 How many times have you uttered the phrase, "I can't believe this guy is still in the league"? I know I've done it often.

But no one has surprised me more by his ability to keep showing up in a major league uniform than Rudy Seanez, featured on this 2008 Upper Deck night card. His career has spanned 20 years. Can you believe that? I can't. He pitched for the Dodgers on two different occasions, including appearing in 73 games in 2007, but I was never all that impressed with anything he did. Such is the life of a reliever.

Please note that Seanez is not left-handed. Lefties seem to hang on forever. But Seanez is a righty.

Some other Seanez facts, according to the quasi-reliable wikipedia:

-- He is 40 years old. He made his major league debut on Sept. 7, 1989.
-- He apparently is a dedicated weight-lifter and mixed martial arts follower who has trained with UFC fighters.
-- He's got a whole bunch of tattoos

Also, baseball-reference.com says his nickname is "Action Traction." What's that mean? He's good in the snow?

Seanez is now pitching for Salt Lake City, the Angels' Triple A farm team. I kind of hope it's not the end of the line for Rudy. I'd like to see him pitch in a fourth decade. Wouldn't that be something?

RWH said…
Judging by the state of the Angel bullpen this season, you can expect Rudy to be adding another makor league team to his resume very soon.
May 30, 2009 at 12:00 AM