Because I belong here

The sixth blog bat around topic question is about as simple as they come: why do you blog?

In a roundabout way, this is why:

I am not ancient by any definition (unless you're one of those punk 15-year-olds), but I have seen a variety of innovations and changes in my lifetime. Some examples:

From self-service gas stations to urgent care centers to podcasting, I have seen innovations that didn't exist when I was a young child.

And now we have "blogging." I have enjoyed almost all of the innovations that I have just mentioned, but not until I came across blogging, did I say "this is where I belong." If all of those other innovations disappeared, I would miss them, but I wouldn't feel as if a part of me had left, too. I can't say the same thing for blogging.

I have always enjoyed writing. When I was around 11 or 12 years old, I would set out to write novels. I would put together page after page of loose leaf paper and write more than 100 pages of whatever idea I had in my head at the time. Unfortunately, I was only 11 or 12, and I eventually gave up on doing that.

I was destined for a job in newspapers. I loved to write. I loved sports. I combed the baseball boxscores every single freakin' day. I still do. I'm blessed that I have the job that I do. But at the same time it gets tedious. I don't write as often as I want, and a lot of the topics do not interest me. Some sports are beyond my comprehension as to why anyone would like them (example 1: lacrosse). So it's hard to write about things where my interest wanes.

But with this blog, I get to write about what I want every time I write. You cannot beat that with Babe Ruth's 40-ounce bat. Which brings me to one of the other questions in this blog bat around: What made you choose sports cards as your topic of choice? Simply, it's what I am interested in right now, and thanks to Ben Henry of the retired Baseball Card Blog, I discovered that other people were actually interested in writing and reading about baseball cards. 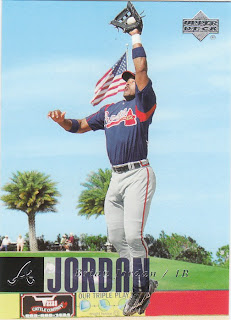 There is so much going on in this card that it confused me for at least a year. The angle of the shot, with the fence in the distant background and the hill beyond that, makes me wonder where in the world Brian Jordan is on the field. I assume he's at first base. But that fence throws me off.

Then you have everything going on in the background. The hill, the trees, the people sitting on picnic benches, the American flag. It's a lot to absorb.

And I'll continue to write about photos like this one: 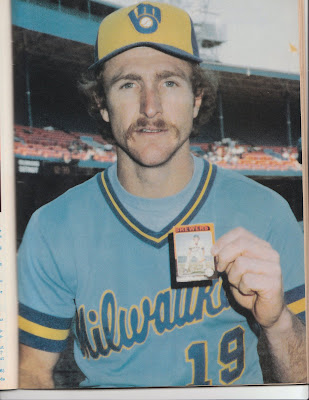 Robin, for heaven's sake, put your rookie card in a top loader and never, ever handle it with your fingers! The Beckett police will be at your door. 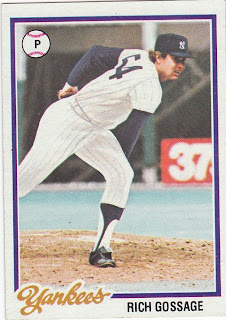 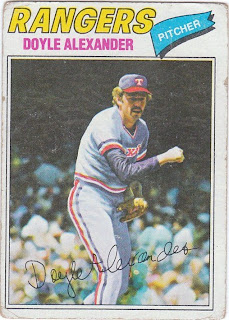 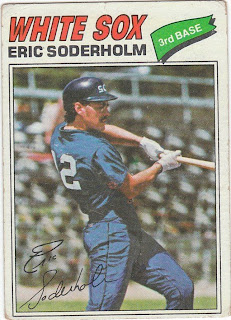 Players who not only had their caps airbrushed, but their entire uniforms airbrushed. All three are very odd-looking. The funny thing is, we never gave it a thought as kids.

I'm glad you have shown an interest in my ramblings. I'm glad you've invited me into this community. Because, really, this is where I belong. This is me. I blog because I belong here. Can I say, "I blog, therefore I am"? I wouldn't go that far. But you're in the right ballpark.

Matt Runyon said…
I blog because I like talking about old cards, card collecting memories, and the sport that I grew up loving. I enjoy reading the other baseball blogs and I like to contribute my share.
May 12, 2009 at 10:42 PM

Captain Canuck said…
and, apparently, you blog to diss a neighbouring country's national sport.
May 12, 2009 at 11:32 PM

I will never have anything good to say about lacrosse. Where I am, it competes directly with baseball. It has taken talented young players away from baseball. High school kids are being brainwashed into thinking a wonderfully cerebral sport like baseball, with its ebb and flow, is "dull." So they take up a sport like lacrosse which is a carbon copy of so many other sports that I see (a goal on one side, a goal on another, player carries ball to goal). And another potential baseball star is extinguished.

Not to mention that I've watched more than my share of lacrosse games (and attempted to write stories about the sport while not falling asleep) and found it completely uninspiring. To me, it's like hockey, except slower and not nearly as interesting. Hockey should be Canada's national sport. Can't someone change that?
May 13, 2009 at 2:20 AM

GCA said…
Those are airbrush jobs too? It never ceases to amaze me how many there were and how few I really recognized at the time.
May 18, 2009 at 3:48 PM