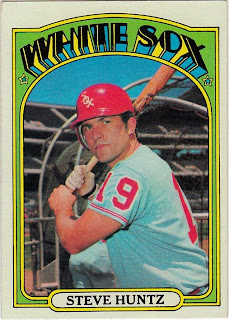 If you don't know what 1972 song this post title refers to, then I know one thing about you already: your name is not Brandy.

Because if it was, you would have had this song sung to you at least 5,000 times over the course of your life so far, probably a quarter of those times by some drunk in a bar.

But if you're not Brandy (what a good wife you would be), and you're not familiar with the dulcet tones of 1970s pop rock, then you probably aren't all that familiar with the 1972 Topps set either. And that's a shame. It is one of the best -- certainly one of the quirkiest sets -- that Topps has ever produced. It is one of my favorites. It is the subject of one blog, which has grown distressingly quiet of late. And it is a new object of affection for one of our favorite bloggers.

To that one blogger, some advice: save yourself. OK, not really. But collecting this set is fairly challenging. I'm barely a third of the way through completing it and it's a daunting task. I expect it to take my lifetime. First, it's a 787-card set. Considering there were only 24 teams in the league then, that's crazy talk. Secondly, the high numbers (657-787) are a pain to find, probably more difficult than the 1971 high numbers. And they ain't cheap.

Then there's finding that Nolan Ryan card, which could cost you a 100 bucks if you want one in spiffy shape.

But it's easy to forget all that. This set makes you forget, with the psychedelic colors, the "The Electric Company" team name design, the hand-drawn stars that look like grade-school kids made them, and all the bizarrely fantastic photos. This set was packed with subsets, too, which had to be both fascinating and frustrating for kids (I was never crazy about a lot of the subsets when I was a kid).

For me, '72 cards were ones that only the older kids had. It was still a couple of years before I was collecting any cards. But I had seen 1971 and 1972 cards here and there. It's catching a glimpse of those "old" cards when I was a wee one that has prompted me to collect both sets now -- even with all the road blocks you encounter with each set. Actually with all the short-print high number cards and subsets, they remind me of the sets we have today.

I enjoy the cards so much, that I thought I'd count down my favorites, from what I have in the collection anyway. I picked 12 cards (well, actually more than 12 as you'll see) to feature here. Hope you enjoy: 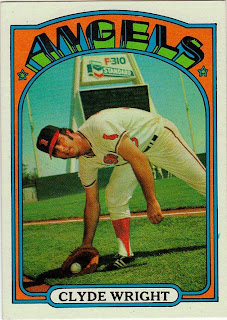 12. Clyde Wright. This card isn't as great as the Billy Cowan card. That card and the Billy Martin card are probably the two most-talked-about cards in the set. Unfortunately, I have neither (I keep getting distracted by other bright-and-shiny '72s).

What I like about the Wright card is, of course, the "Big A" scoreboard advertising Chevron gasoline for all the world to see, and Wright's odd pose. He's a pitcher. When would he ever look like that on the field? 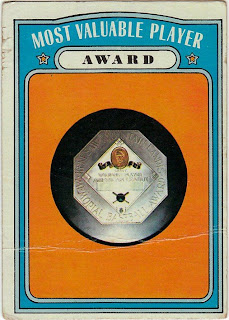 11. Most Valuable Player Award. I recently received this card as a throw-in from reader Yarden. More cards from him are coming up in a later post. But the thing that is so cool about this is that it makes me think of this scenario: Topps had so many cards in the set that they ran out of players and, in desperation, started taking pictures of awards trophies. Bump the set to 800 cards, and you probably would have found photos of food Topps employees brought for lunch.
If you go through the 1972 checklist, right after #620 Phil Niekro, you come to six cards that are nothing but photos of trophies. The Commish Award, MVP Award, Cy Young Award, Minor League Player of the Year Award, Rookie of the Year Award and Babe Ruth Award. I'm telling you, it looks bizarre when you're looking through a binder of '72s, featuring ballplayers full of life, and then you come upon a half-dozen inanimate objects. The kids must've loved those. 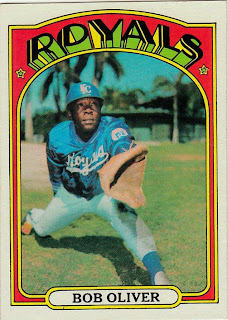 10. Bob Oliver. Too sweet. The exaggerated first baseman's pose, the satin jacket, the helmet (huh?), the palm trees. I have several of the Royals cards from this set. Almost all of them make the Royals' Fort Myers spring training facility at the time look like a Little League park. A neglected Little League park. At least this photo looks a bit more, um, festive. 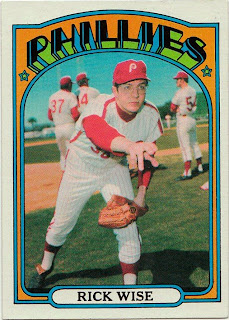 9. Rick Wise. The three guys in the background frame the photo nicely, even though this is another one of those "the field is tilted" photos that were so prevalent in the 1970s. But all that springs to mind when I see this photo is three guys in the back conspiring to give the guy in glasses a wedgie. 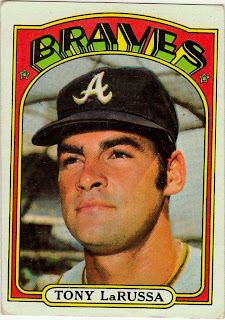 8. Tony LaRussa. You didn't know Tony played in the major leagues did you? Neither did I until I stumbled on this card in a card shop. Tony looks like he's always had trouble with smiling. 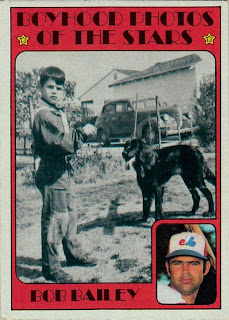 7. Bob Bailey, Boyhood Photos of the Stars. What a classic old-time photo. I think Bob lived next door to Dorothy and Toto.
How did Topps get these photos? I can't imagine them asking ballplayers if they had any pictures of themselves when they were kids. Did they badger the families for photos? I really need to know this. 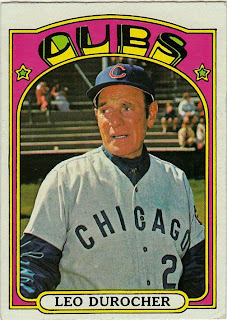 6. Leo Durocher. One of the best things about this set is that it features a lot of all-star players just ending their careers (Mays, Aaron, Clemente, Killebrew, Kaline), or managers like Durocher who had been in the game for ages. And then you see them presented with a backdrop of colors spun out of an LSD hallucination. A guy who managed in the 1940s, for crying out loud, with a bright green, yellow and PINK design! Fantastic. 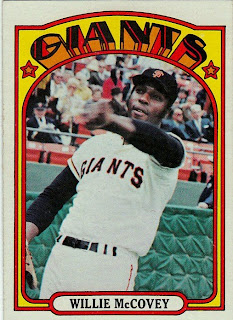 5. Willie McCovey. Even though he's a Giant, this card holds a special place for me, because it was the first '72 card that I acquired that wasn't a Dodger. I got it when I was young, and as you can see it's still in great shape, which means it was in awesome shape when I got it. I have no idea how I obtained it though.
Everybody is tilted in the photo. And the people in the stands are fancy. Because of that, I'm guessing this was during the 1971 National League Championship Series, which was between the Giants and Pirates. Thank God the right team won. 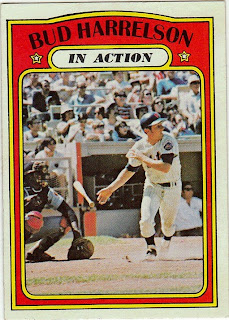 4. Bud Harrelson In Action. I'm going to lump several In Action cards together under No. 4. There are a ton of these throughout the set, probably more than there should have been. But again, they had to fill a 787-card set.
They were unique for their time, because Topps had just started putting game-action photos in its flagship set the year before. And, as was typical of the time, some of the shots are awesome and some are awesomely awful.
I like this Harrelson photo a lot as he eyes his shot through the hole on the right side. The reactions of the fans in the stands are great. And, best of all, fat Elvis is in the dugout. 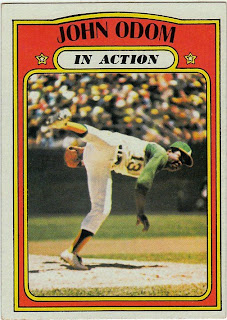 Here is another one of my favorite In Action shots. John "Blue Moon" Odom truly IN ACTION. What kind of pitch do you have to throw to end up like that on the follow through? Did he just throw a 354-mile-an-hour fastball? That seems like the only thing that could produce that, uh, angle. 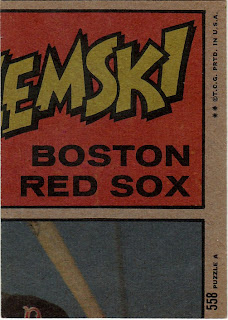 That's the back of the card. Cool, a Yaz puzzle. 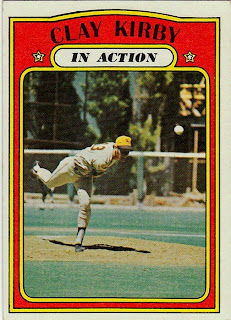 Then you have the bizarre action shots. This card of Clay Kirby is a nice one except I don't know what is going on in the background. It looks like he's pitching in front of the giraffe exhibit at the zoo. 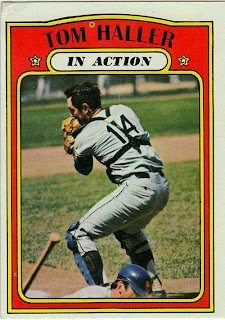 And this card violates every photo-cropping rule I have ever been taught. The poor Mets guy is safe; why not show all of him? And how about explaining what the bat is doing there. Did the bat strike the Mets player in the head? Is that why he's sprawled on the ground? I'm left hanging here! 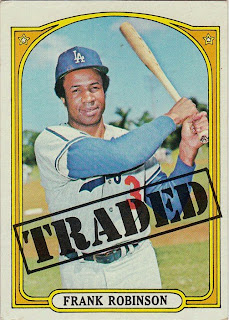 3. Frank Robinson Traded. What an awesome card. One of my favorite card show acquisitions ever. This is the only card, that I'm aware of, of Robinson in a Dodger uniform, excluding the 1973 Topps card in which the word "Dodgers" is whited-out on his uniform.
The Traded cards were a first for Topps. Between numbers 751-757, they issued cards of Steve Carlton, Joe Morgan, Denny McLain, Frank Robinson, Jim Fregosi, Rick Wise and Jose Cardenal, all of whom were traded over the offseason. The stamp "TRADED" is a bit alarming. It's as if the players are cattle (was this editorializing on a baseball card?) It also implies -- at least to me -- that Robinson was traded FROM the Dodgers. 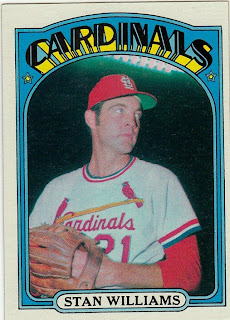 2. Stan Williams. I've already discussed this card before. You know why it's here. 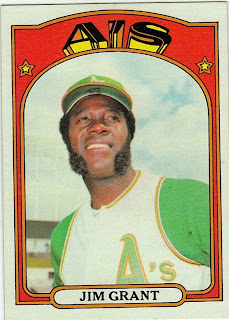 1. Jim "Mudcat" Grant. You have your 1975 Oscar Gamble and you have your 1972 Jim Grant. The finest sideburns in the history of cards, baseball, the 1970s, hairstyling, and the ever-living world. An iconic card if there ever was one. Far out, man! The '70s are here!
This card needs to be worth a million dollars. How do I make that happen?
So, there you are. It makes you want to collect the set doesn't it? It'll suck you in.
Oh, and here's the song I mentioned at the beginning, by the Looking Glass. Yeah, I know the Chili Peppers covered it. But this is the '70s, man.

gcrl said…
i like the one-legged osteen in action card and the maury wills in action card that shows him at bat rather than sliding or running or doing something more maury wills-like.
i think frobby has a couple oddball dodger cards - stadium issues mostly.
good call on the mudcat.
May 19, 2009 at 7:57 AM

Matthew Glidden said…
Nice post on the set. I've also wondered why they kept kicking out cards into the high 700s, adding awards and traded players--did the early series sell particularly well that year?
May 19, 2009 at 10:29 AM

Dinged Corners said…
Thank you for posting about the greatest baseball card set ever produced. We even have a couple of the ones you mention! You know what would be fun? Renting an RV and taking the family to every card show in the country this summer in an attempt to complete the set. Er, at least maybe to obtain, like one-fifth of the set. But it'd be fun. We agree it's tough to get them nice looking....and centered. Actually, it's almost impossible to get them centered, but we don't care. We are Devotees.
May 19, 2009 at 11:06 AM

GOGOSOX60 said…
I wonder if Topps already knew they were going to end the idea of issuing series for 1973, they decided to go overboard for the last truly separate issued series set.

OR, maybe kids were buying cards caused a huge demand of the earlier series and Topps thought that demand would last all year??

There were areas of the country that got all 660 cards in one series in 1973, so maybe Topps already knew they could cut down on returns of unsold series if kids got all their new cards all at once!!
May 19, 2009 at 7:31 PM

aksikila said…
Nice article. The 1962 Post Cereal Norm Cash card might be a night shot card. It appears to be taken with a flash with perhaps the stadium lights on?
March 19, 2019 at 5:46 PM