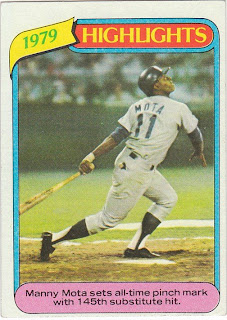 If Upper Deck Documentary could go back in time and produce a card in 1980, this is what they would deliver.

This is a photograph of Manny Mota, in a road uniform, playing at night, watching what appears to be a fly ball of some sort.

Yet, Manny Mota's all-time pinch hit, delivered on Sept. 2, 1979 against the Cubs, came at home, during the day, on a bloop single off of Lynn McGlothen.

The only thing that would make it even more Documentary-like is if the photo on the card was of pitcher Burt Hooton or some other non-Mota player.

This card is kind of unusual for its time, because there are several cards in which the event took place at night and the card depicts the player during the day, which has to do with camera technology back then, etc.

Mota doesn't hold the all-time pinch-hit record anymore. Lenny Harris does with 212. It's interesting to note that the top three players in pinch-hits all-time, Harris (212), Mark Sweeney (175), and Mota (150) all played for the Dodgers.

When you expand it to the top 10, you get two other Dodgers -- Dave Hansen (138) and Jose Morales (123). Add the top 20 and there's another one, Vic Davalillo (95). It must be that Southern California lifestyle. Lounging all day (or all night), then going up to the plate and getting a hit anyway.