The year of the insert

Thank goodness someone revived this thing (although the image may be outdated now). I had no idea what I was going to write about tonight, and it's been like that just about every day for the last two weeks.

Even though I do agree that part of my funk is because there isn't much new card-wise, I'm not going to complain about that because:

1. I already went on a rant about how that's not necessarily a good excuse.
2. If there were new card items at this time of year, I would be a complete mess because I can't possibly spend cash on cards in December, and I'd end up in a ball on the floor moaning about my misfortune. Drool would be involved.
3. If I convince myself that I must buy cards to eliminate my funk, I will end up with a blaster of 2011 American Pie, and I've already winced and shuddered over some of the cards that I've seen. (If there's a loose pack of the stuff, though, I'll give it a whirl).

The Blog Bat Around is just the thing to eliminate funk without doing something desperate in the card aisle. So thanks to Ryan G. for reviving it, and PATP for suggesting it.

This is already my ninth BBA, and I haven't even participated in all of them. You can see the others here. Just don't take them too seriously. A few were complete goofs.

For this BBA, Ryan G. asks:

Well, I've already mentioned my favorite set of the year. 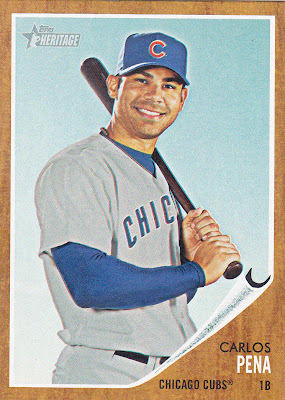 It's Topps Heritage. It's classy and cool, fancy and familiar. And if you get desperate for warmth this winter, I'm pretty sure the cards will keep a fire going because they're made with real wood shards (not really, put away the tweezers).

But I can't wholeheartedly endorse 2011 Heritage because of the stupid short-prints, and my aversion to hatless ballplayers.

So that leaves me out of answers for the best set, which I've already said, too.

When it comes right down to it, my favorite sets of the year are not what are traditionally considered sets when one is rating the "best of." My favorite sets are insert sets.

Yes, this is an ugly trend. Don't let Topps hear this, although I have a suspicion it already knows. We're never going to end inserts if a traditional collector like me says they're the best thing about 2011. But I can't help it, it just IS.

So, in my quietest, super-top-secret voice, here are my three favorite sets of the year, all insert sets. Shhhhhhhhhhhhh!: 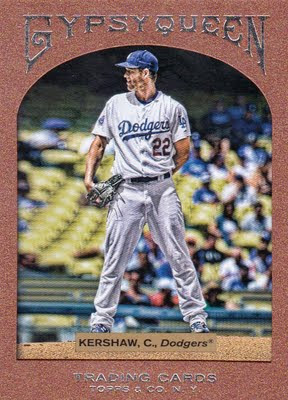 3. Gypsy Queen framed paper, green or brown: OK, this is technically a parallel and not an insert set. But you can collect it as an insert set if you like.

These cards are fantastic. I don't understand all the hooey about base Gypsy Queen. But, my goodness, the framed paper cards are absolutely amazing tiny pieces of art.  They better be back next year. It's the only reason I'll buy 2012 GQ. 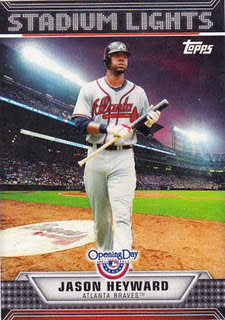 2. Topps Opening Day Stadium Lights: If you're going by strict "insert series guidelines" -- if those exist -- then this is the Insert Set of the Year. In fact, I already declared it so.

But there's something else I like better. Still, I appreciate Topps creating a set just for dear old Night Owl, even if that's not necessarily true. It did get me to collect enough Opening Day to complete the set though. And get me to shut myself in the closet once or twice to see the cards glow in the dark. 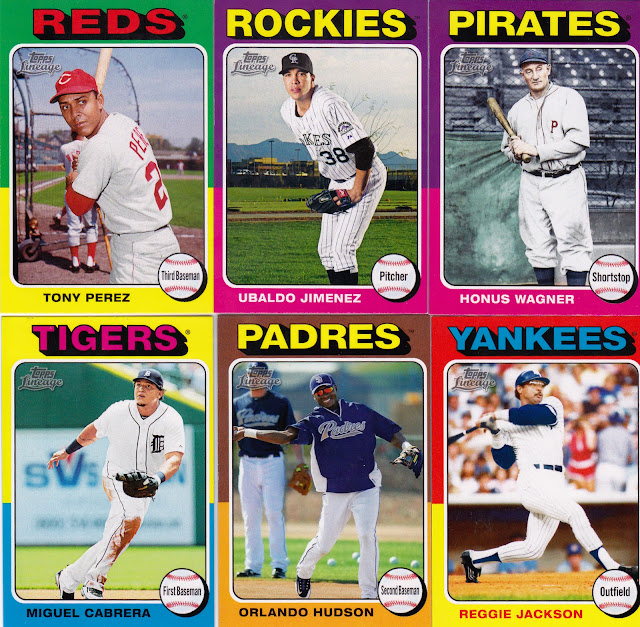 1. Topps Lineage 1975 mmmminnnniiiiiiiiiissssssssss!: I never thought anything could surpass the Stadium Lights set back last spring, but if you're going to make an insert set that pays tribute to my favorite set of all-time, then I think you've struck upon the best set of the year.

In fact, these very '75 Lineage minis arrived in the mail today from the Blog Bat Around starter-upper, Ryan G! How's that for tying stuff together? Who's in a funk now?

Some might consider these cards parallels, too. But some of the cards do have different photos than the base cards, so they're inserts to me.

And that's the best of the best.

I don't necessarily like myself as a collector for thinking insert sets are the best of the best. Just tonight I saw that Topps is bringing back one of my favorite sets ever, All-Time Fan Favorites, but turning it into an autograph insert. Booooooooooooooooo!!!!!!! Bring back the Fan Favorites base cards!!!!

As for the card set that made me vomit (to paraphrase the question)?

Well, there's nothing that has made me nauseous card-wise since '92 Donruss. I think if I actually had the cash to open a $75 pack of Topps Tier One, there'd be a good chance of a regret vomit after seeing the cards I pulled.

But other than that, the worst that 2011 cards have done is made me write a critical review.

So, when you look at it like that, possibly this year's card season wasn't that bad.

Play at the Plate said…
If the Lineage base set was worth mentioning, I might pick it just because of those incredible minis. I'll be doing my post in a bit.
December 16, 2011 at 12:40 AM

Ryan G said…
I have to agree. This year, the inserts stood out above the base sets. It would be nice for Topps or Panini to put more effort into the base set than inserts, parallels, or hits.