Didn't I just clear this off? 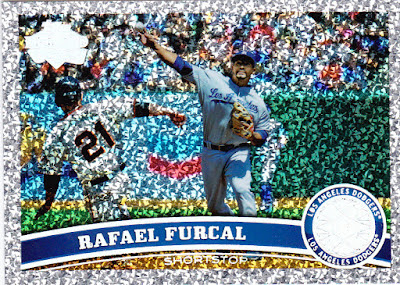 I found this card today stuck in the back of my roll-top desk where the back of the unit meets the desk shelf. The card didn't suffer any harm, because it was encased in a penny sleeve, but it was really wedged in there good.

So when I went through that trade post a few days ago and declared myself all caught up, sparkly Raffy was calling in the distance "Hey! What about me? Can't you see me? I'm sparkly!"

But it was Christmas and just about everything on the planet sparkles at that time of year, and Furcal was ignored like players who lucked into a World Series title should be.

Apologies to Justin G. of The Hopeful Chase who sent me this card. He'll be happy to know that it is now safely in my "to be recorded" stack. Another diamond Dodger down and seven to go.

While taking care of the Furcal card, I decided to scan the two packages that I received in the mail on Tuesday and post them quickly so I could be caught up AGAIN. Caught up twice in less than a week! Good gracious, I'm starting to be as efficient as my mother. Don't let this get out.

Anyway, I received a key card from Daniel at It's Like Having My Own Card Shop. 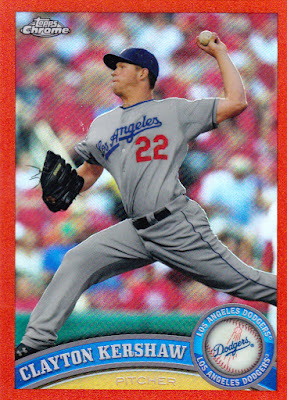 He must've sent it just before Christmas. Which takes some guts. I haven't been anywhere near a post office for over a week. And I probably won't get Daniel's package mailed out until Friday, if I'm lucky. Sorry, I was scarred by my last visit on December the 20th of two thousand eleven. Maybe if you send me that graded rookie card of Don Drysdale, I'll speed things up a little bit (heh). 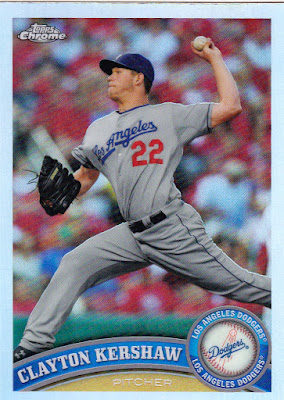 This is the refractor version of Kershaw, which arrived the same day from Brian at Play at the Plate. All that's left now are the more difficult parallels of this card. But did I mention that mother-in-law sent me some money? See, Brian isn't the only one with a cool mother-in-law. And I plan to do some damage that you'll see here one day. 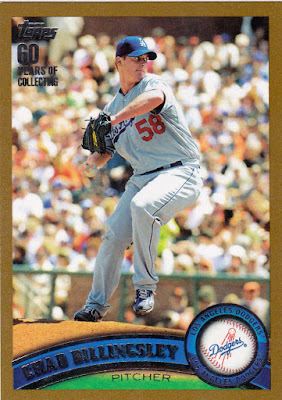 Brian wondered if I still needed the cards he sent because I believe we had made arrangements some time ago. I'd say he's slow, but that would be rude, and the fact is I'm even slower. I think I have one card saved for him at this present time.

Oh, I meant to say, that I did have a couple of the cards that he sent, but the gold Billingsley is not one of them.

I needed this Billingsley card, too. By the time Bowman Chrome hits shelves, I am jaded and disgusted and plain jerky about that year's card offerings. So every year I end up with Bowman Chrome Dodger needs left dangling on my want list. Every year. This is just my second BoChro Dodger. Because, Bowman Chrome I don't need you. I never needed you. You disgust me.

OK, I didn't really mean that. 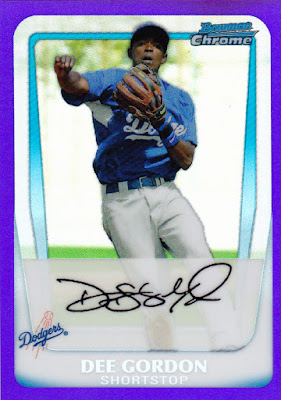 I am so happy to have this card. No offense to Rafael Ynoa, but a purple refractor of a guy who hasn't played in the majors doesn't impress me. This, however, is tremendous.

And those nifty cards that I have already will prove very handy, too. Once I rip open the packages I already sealed and throw the cards in there.

That's how caught up I am. I'm so caught up that it's getting inconvenient.

But at least the desk is cleared off again.

Now don't you send me anything else before New Year's.

Play at the Plate said…
I thought you'd like that purple Gordon. I'll bet your desk is already covered in trade packages...
January 2, 2012 at 1:29 AM