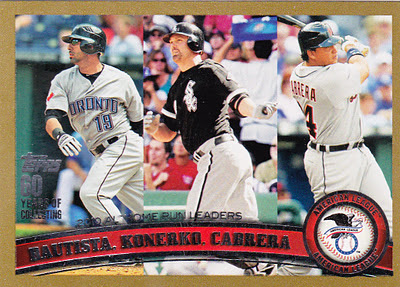 I am in the midst of my end-of-the-year filing of 2011 cards. Right now, I am in the middle of storing away the Topps base set. Unlike the last two years, Topps is not getting the binder treatment. It's going straight to the box.

Filing the base set takes a little time as I've always got a bunch of those things. It can get a bit tedious, but I do find items that I didn't see the first time. It helps pass the time. 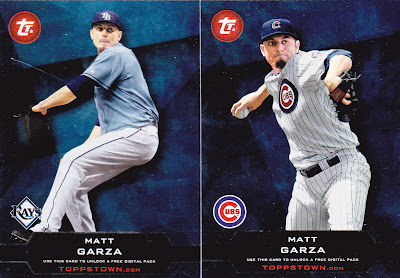 Speaking of scaling back, here is the point of this post: 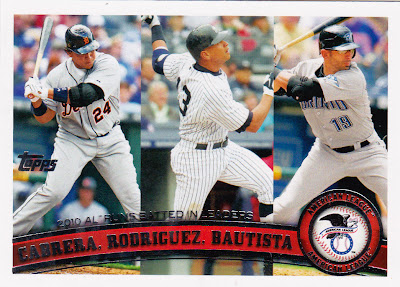 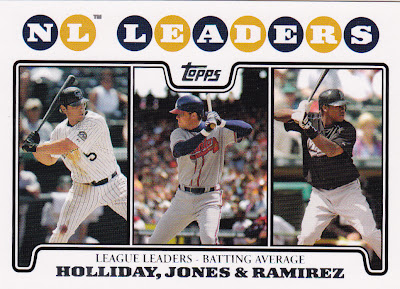 I just can't get interested in these cards the way they're presented. To me, they're almost non-existent when I shuffle through the set. I mean, I enjoy looking at the league leaders list like any baseball fan. It's one of the great joys of following the sport. But the presentation of these cards bores me. 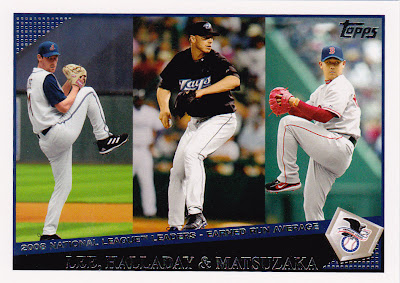 The 2009 style is a little better -- although unreadable. But still, the jumble of tiny action shots immediately switches my brain into shutdown mode. 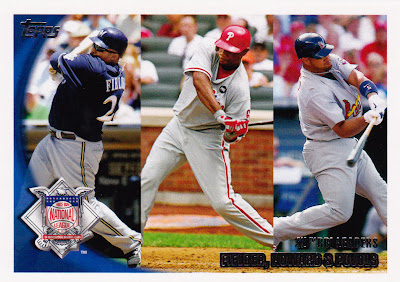 Even this card, which features three memorable sluggers, just doesn't do it. It may look impressive on the scan, but there's nothing about it that will make me stop and look while going through my cards.

Otherwise, it just looks like you're trying to pad the set. 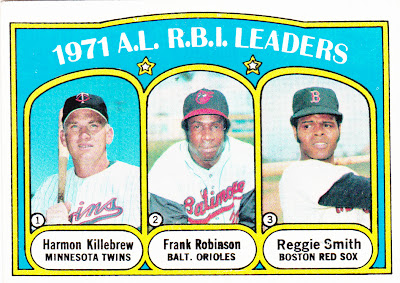 The 1972 Topps set created separate A.L. and N.L. league leaders cards (as did sets from the '60s). I've always thought it was too much. It's set-padding.  There are many other examples in '72 of Topps trying to pad the set.

But at least the portrait shot is better than the action shot of recent years. The photo space is so small, you need a tight portrait for the identify of  the player to register in your brain. Action shots look too generic when they're that small.

But if you must go the "three leaders in each league" route, the best, I think, is the 1976 Topps set. 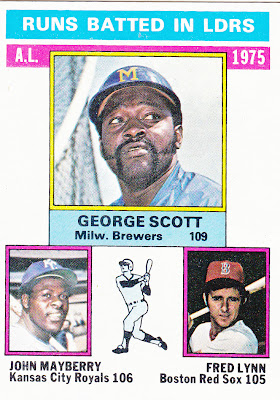 I call it the Olympic podium style league leader card. You've got the big photo for the gold medalist and then the two runners-up down below. Perhaps it's not the best-designed card. But I really like the presentation. The league leader isn't blended in with the No. 2 and No. 3 guys like on current league leader cards.

Plus, this is cool. Topps actually found three different photos of Tom Seaver and Andy Messersmith instead of repeating one or two of the photos. That's how it's done.

Perhaps you're wondering why I'm going on so much about this.

"Who cares about league leader cards?" you're saying.

Exactly. Topps has made us stop caring.

It's time to care about them again. League leaders are cool. They're not filler.

deal said…
yeah your absolutely right - the action shots don't work at all on the LL cards. The Flagship has tons of action the headshots would be a nice break from the action shots.
December 5, 2011 at 8:16 PM

Jim from Downingtown said…
The 1-2-3 finishers per card (with separate cards for each league) was better imo.

I agree with the padding in the 1972 set, but not because of the league leaders. The trophy cards were ridiculous, as were all the "in action" cards.

In theory, "in action" cards sounds like a good idea, but Topps only featured some of the players in the subset, and there doesn't seem to be any rational selection criteria. I mean, Bob Barton and Pat Corrales?!?!?!
December 5, 2011 at 9:31 PM

It used to be a thrill to pull an action card. Now with EVERYTHING being an action shot it kind of cheapens it a bit.

Yeah, I thought of the 1972 trophy cards as well. Very bizzare. Perhaps they were foreshadowing the much beloved and be-hated revolving door card.
December 5, 2011 at 10:53 PM

Paul Hadsall said…
Maybe we could dump the league leader cards, stick a trophy on the player's regular card & have some space for a few more relief pitchers, fifth starters or backup catchers?
December 5, 2011 at 11:15 PM

Jim from Downingtown said…
EggRocket, Paul, and others,

You'll be happy to know that after I launch my Topps takeover coup, this will be my first order of business:

Expand the base set back to 25 players per team, plus a team card, manager, and rookies card. This totals 840 cards.

The set will once again be issued in 7 series (1 each month from Feb to Aug). Since each series is 132 cards, that makes for a total of 924 cards. This leaves 84 cards for league leaders, checklists, post-season highlights, etc.

September will have a 132-card update set.

In return for charging you for a 1056-card base & update set, my 2nd order of business will be to eliminate most of the nonsensical parallel sets (you won't have the money for everything anyway).
December 6, 2011 at 1:07 AM