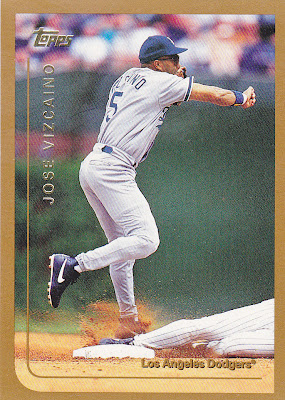 A year ago, I addressed one of the two years since I began my collection odyssey in which I did not collect cards.

Tonight, I'll present you with the other year that I did not collect a single card. That year is 1999. And I wasn't collecting not because I was too busy partying like Prince or hiding in a Y2K bunker. I was dealing with a year-old child. There wasn't an ounce of time for collecting ... unless you're talking dirty diapers. I could have won some very smelly contests there.

Much of what I have seen from 1999 cards is just a continuation of other late '90s themes. Silver and gold. Shiny. A willingness to experiment. And some so-bad-they're-good items.

So let's do a quick rundown of what collectors consumed while I was busy filling the diaper genie. 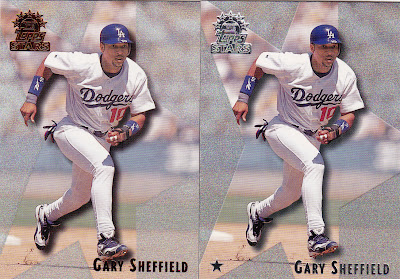 Irksome parallels: I'm a sucker for some kinds of parallels, but these I don't understand. When I first came to realize what Topps Stars was -- a pathetic rift on the same card featuring a different quantity of stars and a different metallic tint -- I was horrified. Those poor, poor gullible collectors. What suckers. What clueless dupes. What unlucky schlemiels (yes, I know that's redundant). My heart went out to them.

As for the Topps Gold Label cards, with the field-hit-and-run theme, it took me months to realize that there were multiple cards with the same card number that I needed to collect. When I figured it out, I was crestfallen. "Why would they DO that?" I believe was my response.

Fortunately, today we only have this. That's much more manageable, right? But now I have a pounding headache. 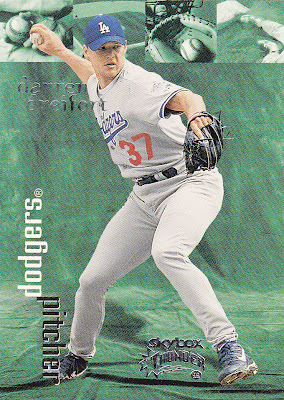 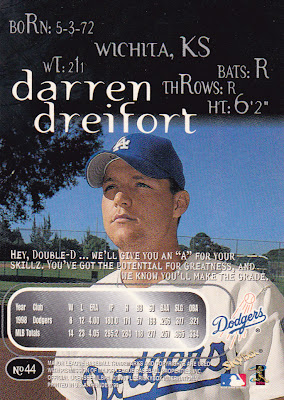 Irksome patterns of speech: This particular set has been addressed a number of times before, both on this blog and elsewhere. I'm not going to repeat myself except to say that any time you write "We'll give you an 'A" for your skills," and then spell "skills" as "skillz," you open yourself up to ritual beatings. 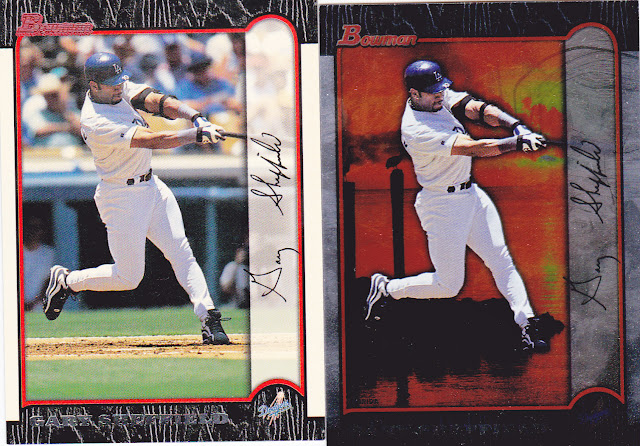 Bowman International with a twist: As a map junkie, I actually like the map parallels on International. But this is fun, too. Bowman picked a setting from the player's home area and used it as the backdrop for the International parallel. Sure, Sheffield is stepping off the dock as he's swinging, but ... oooooooooh, sunset! 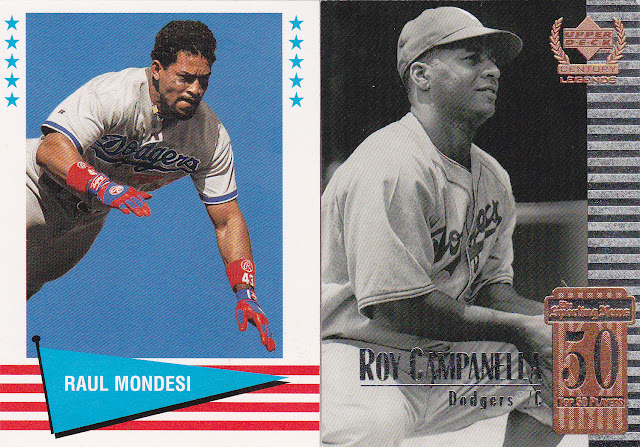 The beginnings of retro: I don't know when retro sets officially began. I don't have time to do any research -- why do you think my posts have been so scatter-shot lately? But among the earliest must have been in 1999. We have both kinds of retro here -- modern players on an old-time design (Mondesi) and old-time players on a modern design (Campanella). Both aspects are still going strong today between Heritage and all those inserts Topps is throwing into the base set. 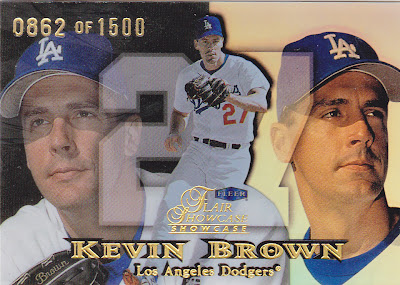 Over-the-top, whaaaaaa???? cards: Cards like this make me laugh out loud. They're so in-your-face and self-important that I can't possibly take them seriously. Three versions of the same player and serial numbering that screams "1500!", and gold printing everywhere, and a giant uniform number threatening to swallow the card. If this card was a person, he'd be one of those loud, fat car dealers who dominates local TV advertising. This card, and many others during this time, takes subtlety and smashes it into a million pieces with a gold lame hammer. 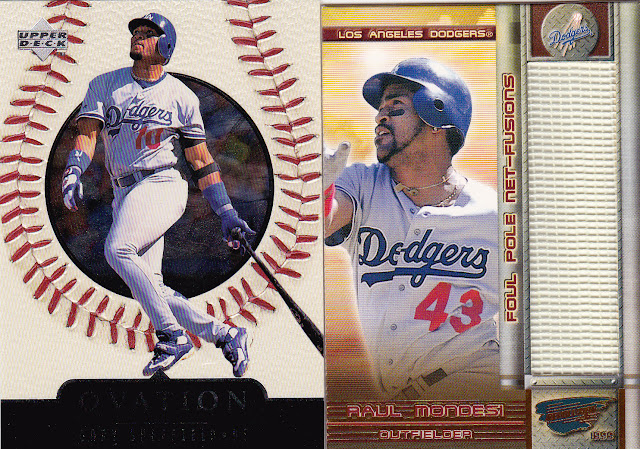 Closer to the game cards: Before relics vowed that they were bringing collectors "closer to the game," a concept that I only associate with actually attending a baseball game, forward-thinking card companies like Upper Deck and Pacific tried some different stuff with the "raised-seam" cards of Ovation, and the "foul-pole net" cards of Pacific Revolution. Cards like these make me happy. I can imagine getting these cards as a kid and exclaiming "cool!" or whatever kids from the late '90s said -- probably something they picked up in The Matrix. 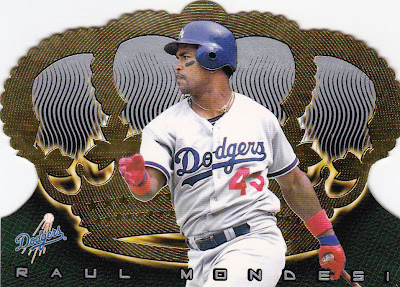 Diecut madness: Pacific was putting out all kinds of crazy things at this point. The gold is just too much for me. I prefer color. But you've got to admire an entire set that is diecut. Was this the first set to feature all its base cards as diecuts? I don't know. Again I'd have to do research, and Christmas is less than two freaking weeks away.

And I'm out of time again right now.

But that helps me get a little better handle on the second of two years in which I didn't collect a single card. Will 2012 be year No. 3?

Nah. I'm definitely collecting. Whether any of the year will be spent chasing 2012 cards, that's to be determined.

flywheels said…
Thats funny. You stopped collecting in 1999 when you had a baby. I started back collecting in 2008 when we had our first baby.

I loved the late 90's stuff, especially Pacific. They always seemed to be on the cutting edge trying things that Topps, UD and Fleer just weren't doing at the time.
December 14, 2011 at 10:55 PM