They pulled me back in 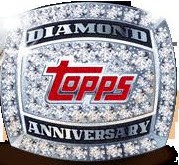 When you've been married for a few years, you can make little deals with your significant other at Christmas time. The responsibilities pile up at this time of year and one of the best gifts you can receive is to not have to roam around some women's clothing store trying to pretend you know what you're doing.

So this year we agreed to get something big for the home (don't get excited -- if I told you what it was you'd be instantly disappointed), and then just a couple of little things for each other. Easy-to-shop-for things (i.e.: CARDS).

That's the plan anyway. Seems like my brain confuses my wife and myself, because all I've managed to get so far is a couple of little things for me. Namely, cards.

Yesterday, I snagged some Update and Lineage with minor success for each. Those blue border Walmart cards aren't too exciting, but I did pull one of Andre Ethier.

Then this fell out: 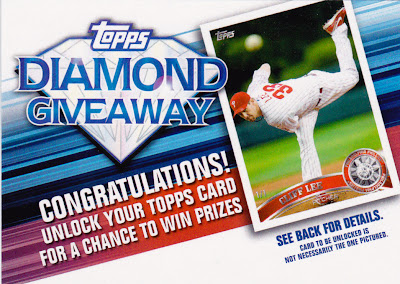 "Aw, it's a Diamond Giveaway redemption card," I said in my most patronizing nostalgic voice ever.

I haven't done much with the Diamond Giveaway site in months. I ordered about all the cards I wanted off it a long time ago, and there were just a few stragglers left that couldn't even draw bizarrely insulting trade offers. In fact, a few weeks ago, I went on a trading binge on the site and whittled my cards down to one 1977 need, two 1979 needs and a 1995 card that has interest only to me because it's a player I once interviewed.

None of those cards were anything that would get any trade offers. I stopped paying attention to the site and didn't even think of it again until pulling this redemption.

What the heck, I thought. Let's see what pointless 1980s card I get from Cliffy. 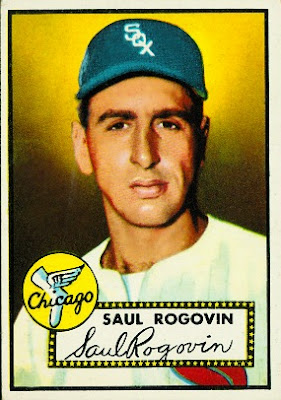 This card beats the oldest card I've redeemed on the Diamond Giveaway and Million Dollar sites by six years. I've already received an offer -- of four 1950s cards -- that I'm tempted to accept.

I had never heard of Saul Rogovin before this card popped up on my screen. But a simple look at the back of the card unearthed the fact that he led the American League in earned run average in 1951.

"Ho, ho!" I said in my patronizing voice again. "That was probably back when they compiled statistics by drilling holes in people's skulls to let the evil spirits out! Those silly, silly, stupid 1950s people! I'll check baseball-reference.com for the real ERA leader in 1951, compiled with modern, proper, real statistics."

But wouldn't you know it, baseball-reference says that Rogovin is the 1951 ERA champ, too.

But I might have to get to work on redeeming the card quickly. I've heard conflicting information on the deadline for redeeming cards, but one of those dates is at the end of this month, which would be yet ANOTHER thing I've got to do in December.

But before I grump more about that, let's see the card I got out of my Lineage pack.

Unfortunately, it wasn't a '75 mini that I didn't have. But it was something I hadn't seen before. 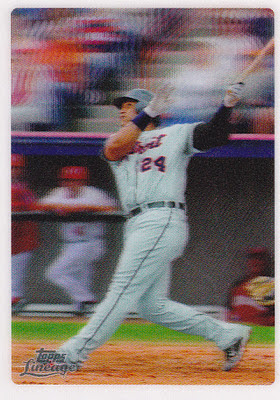 This Miguel Cabrera is a parallel of the Topps 3D inserts from Lineage. These cards don't have the player's name/team/position information on the front. According to the baseballcardpedia site, these cards are based on a 1968 XOGraph test issue set and are a 1:700 pull.

These particular cards are called Lineagraph parallels, are serial-numbered on the back, and feature the same sort of message as the XOGraph cards of the '60s. 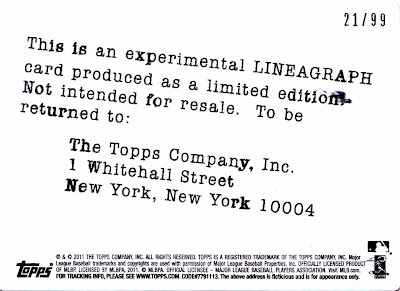 I wonder if anyone is actually mailing these back to Topps?

Anyway, it's not the most thrilling, but kind of interesting to me. If Lineage had fixed the backs of its base cards, it really would have been a pretty good set, with all the wacky little historic tributes like this.

(By the way, I already have a destination in mind for the card here).

But that's it for card purchases for me. Time to actually start purchasing gifts for, you know, other people.

Dawgbones said…
trade you my 1974 checklist card for it...

yeah, really, I got a freaking 1974 checklist card!! and I've actually had one offer to trade for it! I was laughing too hard and accidentally declined it!!

Play at the Plate said…
Very nice! I was thrilled when I unlocked a '52 last year.

I pulled one of those cards from Lineage...unfortunately it was Mark Teixeira. I promptly traded it.

Anonymous said…
Not sure if you saw my comment before, but I do have some Update Dodgers if you'd like me to hold them for you. Just let me know!
December 7, 2011 at 10:39 AM

night owl said…
I've got all the Update Dodgers already, unless you have some parallels floating around. Thanks though.
December 7, 2011 at 11:14 AM