Have you ever woken up in the morning already equipped with the knowledge of how the day was going to go? Stuck in a rut, you know the ritual. It is a day like every other.

As evening arrives, it's the same. Same dinner. Same "how was your day?" Same route walking the dog. Same prime time laugh track. 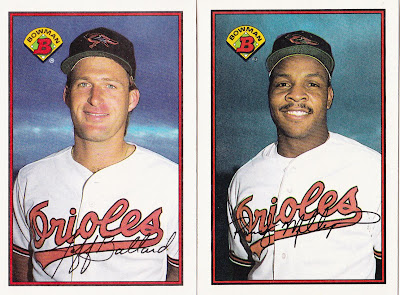 Yeah, you're stuck in a rut.

But at least you have company.

Whoever photographed the Orioles for 1989 Bowman had his rut recorded on cardboard for all of eternity.

Either that or he was just sticking with what worked.

From morning until night.

hiflew said…
The biggest problem is that the cards were numbered by team rather than randomly (or seemingly randomly) like Topps. If these 14 cards were spread throughout the whole set it wouldn't be AS noticeable. Since they the first 14 cards in the set, people kinda noticed.
December 19, 2011 at 4:23 AM

Reminds me of the Sesame Street tune, I believe was called "One Thing is not like the Other" but obviously it is. Or a Can You Spot The Difference puzzle gone horribly wrong!
December 19, 2011 at 6:19 AM

carlsonjok said…
Looks like he was in a hurry because a storm was moving in. He snapped Ballard and Milligan right before the skies opened up.
December 19, 2011 at 7:20 AM