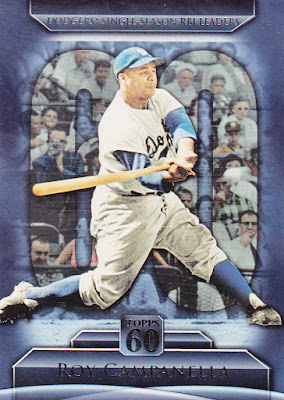 So, it's the day after Christmas and what did I get? That's all you want to know, right?

Well, I think you know my situation enough to know that there's no money to blow on hobby boxes or expensive hits. That was especially true this year when we decided to dedicate Christmas fund money to home improvements.

That meant a lot less for individual gifts. But the good news is that finally -- what's this, year four that I've been begging my family for cards? -- the majority of my gifts were card related.

There was a new card binder, which I've already used to replace the forlorn excuse for one that barely protected my far-from-complete 1982 Topps set. I used to dread looking for cards in that binder because I could barely turn pages, and when I did, it was a 20-minute project to get the thing closed again.

The Diamond Giveaway card I pulled yielded this card: 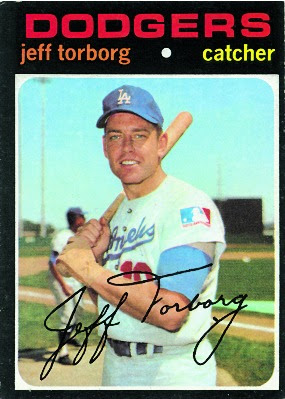 Nice. A Dodger. That I have already.

I just checked the Giveaway site and the card has 25 trade offers already. Twenty-five offers made on Christmas Day. I think there's some commentary to be made about that, but considering I'm the one who redeemed the card on Christmas Day, I probably shouldn't say anything.

I'm supposed to be done with the Diamond Giveaway, but that's going to be a little difficult, because I pulled another redemption card that produced this: 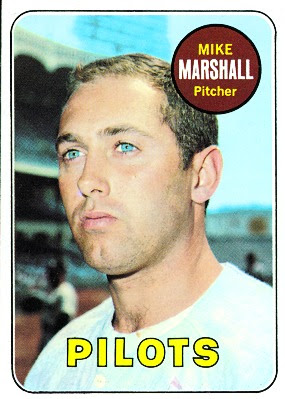 It's Dr. Kinesiology, original Pilot, and former Dodger Cy Young Award winner Mike Marshall. I'm already semi-obsessed with obtaining this card. But I'm also conflicted, because there is one trade offer for it (25 for Torborg and 1 for Marshall -- that's not right) and the offer includes this card: 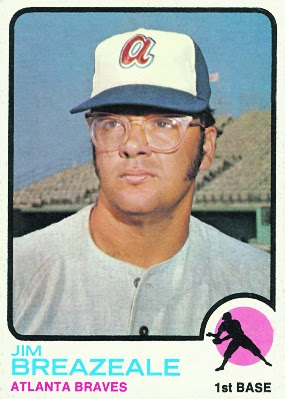 Now, dammit, what am I supposed to do here? I'm going to have to pay for free cards again.

The second redemption card came out of a pack of cards I received from my sister-in-law. Those were the cards that were dragged out from under the tree by my dog a few weeks ago.

I thought that the dog had merely pulled the package the cards were in out from under the tree without gnawing on the cards. I was wrong. I threw out almost an entire pack of Topps Update because the cards were chewed through and couldn't be salvaged.

Fortunately, the parallels are in the middle of the packs and were mostly protected from my dog's teeth by the common base cards. How nice of Topps to package its cards with my crazy dog in mind. 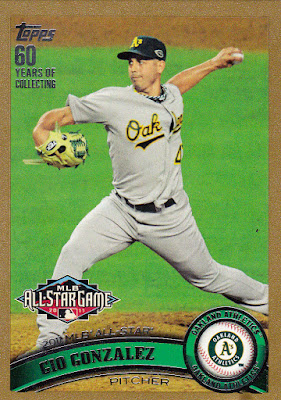 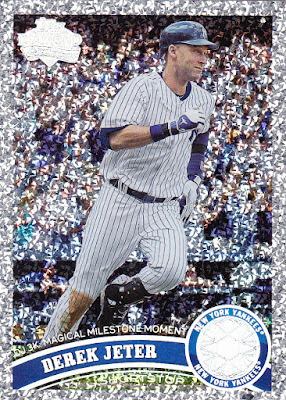 These were the only two cards out of the pack that weren't trashed. Each has a tiny doggy tooth mark at the bottom right.

Two of the other packs -- a Series 1 and a Series 2 pack -- were untouched. The final pack, the Bowman Chrome pack that I showed on the other post, wasn't as lucky. A card of Adam Dunn was mangled. I tossed it. A card of some Yankee prospect I've never heard of was gnawed on slightly. I'm keeping it.

The other card could've been useful in a trade, but now I'm not so sure: 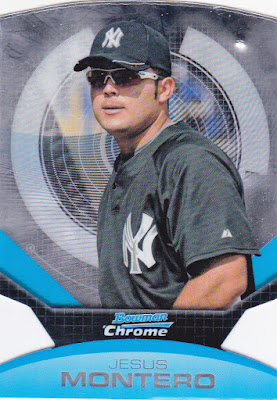 This is the first one of these futuristic BoChro futuristic things I've ever seen in person. It's not my style, and the player is not my style at all. But the puncture mark you see in the upper right pretty much ruins it as trade bait.

Unless you want a card autographed by my dog.

I did get another item related to baseball cards that is not a card at all. But it's the best hobby-related item that I received this year. It's also the best evidence that certain members of the family are listening at last.

Play at the Plate said…
That's a nice vintage catcher...Is it any surprise that the dog went after the packs with the Yankees? I think not.
December 26, 2011 at 2:35 AM

Hackenbush said…
Dogs don't want cards with with good taste. They want cards that taste good. (That almost works.)
December 26, 2011 at 11:09 AM