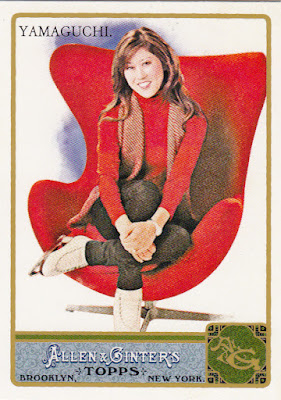 Not a single Allen & Ginter card made it onto the list of the best cards of the past year. That's not too much of a surprise since many of the cards in A&G -- especially of the baseball players -- look the same.

But when A&G zaps us with a revolving door card or a Pluto card, that is when it is at its best and ends up on the countdown. Unfortunately, the closest 2011 A&G came to inanimate objects on cardboard is the chair propping up Kristi Yamaguchi. Red chair is just not going to cut it for the best of the year.

So, it's all ballplayers this time around. I just know that breaks some of your hearts.

Like past "best ofs," I have eliminated any parallel or hit cards for consideration, since the countdown is meant to recognize the photo itself, not the gimmick. However, as usual, the first five cards in the countdown mention some specific trend of 2011 that I liked. 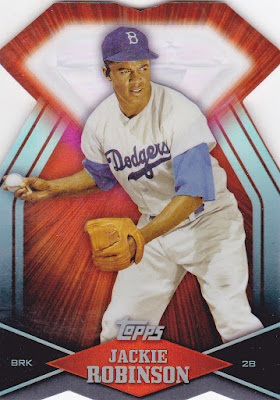 20. Topps Diamond Giveaway diecut cards: I had a lot of early luck redeeming these things and put away the Dodger versions pretty quickly before being stonewalled by the Koufax hoarders. These cards are super-fancy and a great way to make the giveaway site all the more appealing. I still think they look like Christmas tree ornaments though. 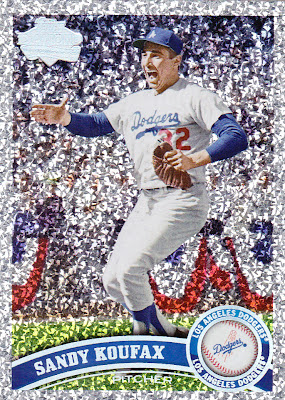 19. Topps diamond parallels: A parallel that looked so great that collectors instantly vowed to complete a whole set of the cards. I don't know if any ever managed to finish it off, but Topps found itself a moneymaker here. Unfortunately, it verged on overkill by the end of the year. 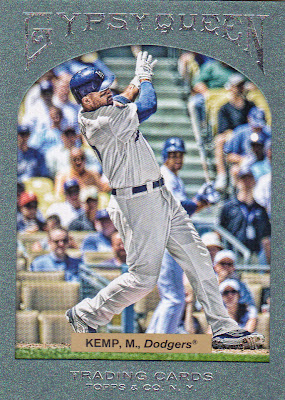 18. Topps Gypsy Queen framed paper parallels: The next three entries are just repeats of the last Blog Bat Around. So I'll keep them brief. These framed paper cards illustrate how great GQ could have looked without the backside of dried-out, faded, wallpaper from the '50s surrounding each image. 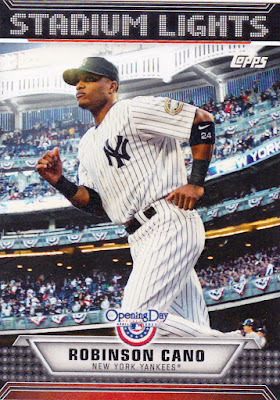 17. Topps Opening Day Stadium Lights inserts: My kind of insert: subject that I love, easy 10-card set to complete, glow-in-the-dark gimmick. Only complaint is that there are two Yankees in a 10-card set. Can we all agree that no one but no one needs another card of A-Rod? 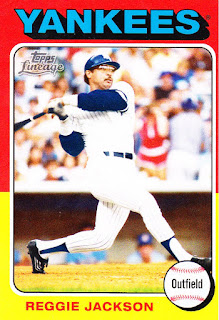 16. Topps Lineage '75 mini inserts: Once I get out from under my holiday/company/no-I-don't-get-a- vacation-to-handle-the-previous-two-things-I-just-mentioned chaos I plan to finish off the other half of this set. It will be one of the craziest /smartest things I've ever done. 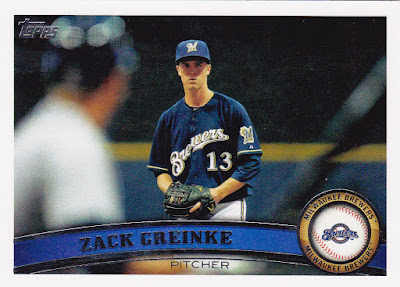 15. Zack Greinke, Topps Update: Here we begin the official countdown. I really like this card a lot and don't know why it didn't get much mention. Maybe because the shadow on Greinke's face kills the mood a little bit (especially when you see the card in person). Still a great shot. 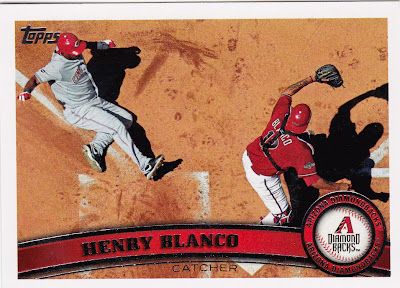 14. Henry Blanco, Topps Update: As many have noted, there are some terrific photos in Update. In fact, all-around the pictures in Topps' base set are as good/if not better than they've ever been. Remember how nice the photos were in '09? I think they're consistently better two years later. 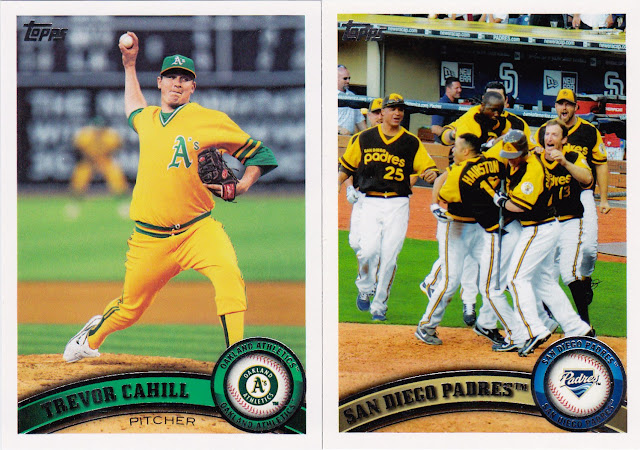 13. Trevor Cahill/San Diego Padres, Topps: OK, I cheated a little bit with these as it's recognizing uniforms rather than the actual photo. But I love these old-school '70s uniform tributes when they appear on cards. I can't help it! I love the ugly, gaudy '70s! We need more plaid! 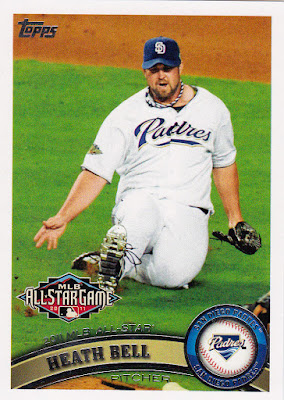 12. Heath Bell, All-Star, Topps Update: "Moment in time" cards are great. Capturing a baseball moment that was one of the most talked about of the season -- Heath Bell running in from the bullpen and sliding into the mound at the All-Star Game -- is even better. I used to not like Bell much. But after this I'm a fan. The guy has some kid in him, for sure. 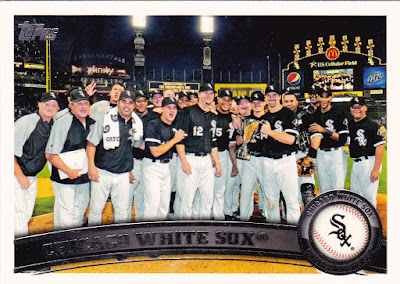 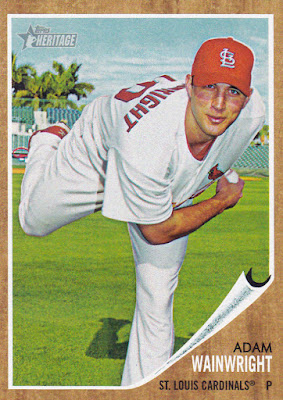 10. Adam Wainwright, Topps Heritage: Heritage has a similar problem to A&G. Nothing to distinguish itself from card to card. But I still like this photo a lot. It's bright, sunny and screams baseball. So what if Wainwright still has the ball in his hand? That didn't stop the photographers in the '60s, did it? 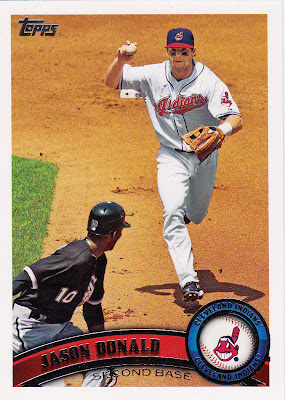 9. Jason Donald, Topps: The newspaper editor in me is cheering at this photo. Maybe not the most unbelievable shot, but photographers know that it is not easy in baseball to get an action shot with both teams in the shot. Plays at second sometimes get too routine. Plays at the plate don't happen all the time. Rundown plays are just good fun to watch and to see on a baseball card. 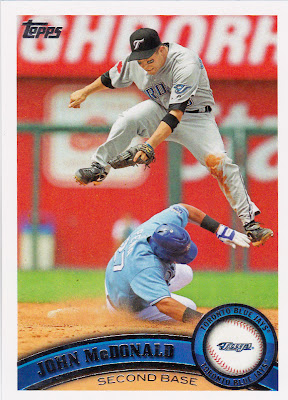 8. John McDonald, Topps Update: That's right, I just followed Jason Donald with John McDonald. And I get the two confused ALL THE TIME.

You're going to see a lot of leaping in the next few photos. There is just something pleasing about the action on this shot. And it has nothing to do with the "Jake From State Farm" advertisement in the background. 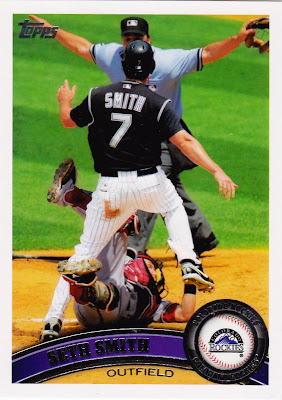 7. Seth Smith, Topps: Another card that I think should have received more attention. What a story this one tells! Smith seems to think he was out because he appears to be in the process of beginning a protest to the umpire, who is no doubt yelling, "I'm SAYING you're SAFE!" Meanwhile, the catcher needs a medic. 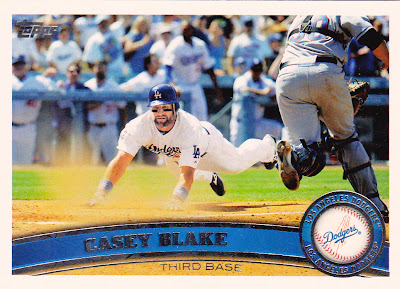 6. Casey Blake, Topps: This card takes a plunge from when I ranked Series 1 cards last March. It doesn't mean I like it any less. I've just grown fascinated with some other cards. Besides, I already know that Blake is SAFE, SAFE, SAFE! So let's move on. 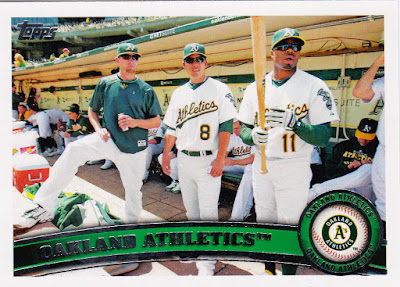 5. Oakland Athletics, Topps: This is one of the greatest dugout shots I have seen ever. Just fantastic. One of these days I'll go through the trouble of identifying the A's. You know how much difficulty I have with that team. 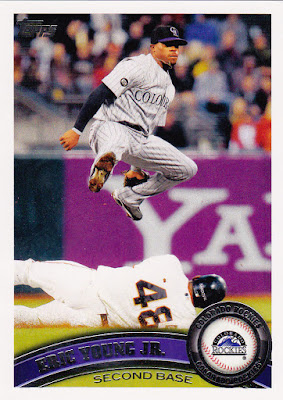 4. Eric Young Jr., Topps: Another repeat entrant. Young has made the best of the year two years running. That's what happens when you can float. 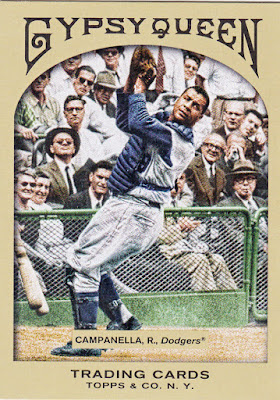 3. Roy Campanella, Topps Gypsy Queen: The only non-insert GQ card on the list. Campy's foul-pop catch and the delightful '50s crowd in the background overcomes that blindingly dull border. Also, Campy, unlike some of his GQ brethren, doesn't look zombified. 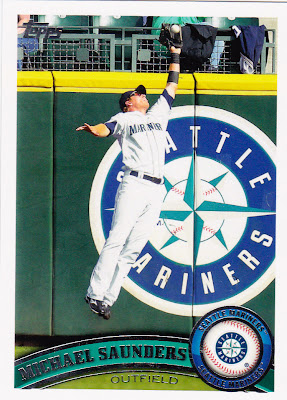 2. Michael Saunders, Topps: Once upon a time, it used to be difficult to photograph an outfielder leaping to catch a ball at the wall. I'm guessing it's still difficult, even though it appears on cards a lot more. But to capture Saunders at the apex of his leap as he's snagging the ball, with the Mariners logo in the background, well, that's impressive. ... Of course, Saunders could have dropped the ball and three runs scored. But we don't have to know that. 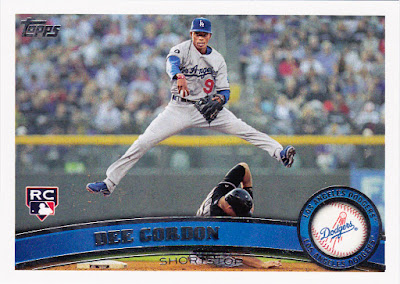 So, as you can see, it was all about Topps and its base set this past year. What choice did we have? Not much else out there.

But, really, some of the images were great. I didn't even finish off the set or the Update set, so I probably even missed a few. (Some, like the Ramon Hernandez broken bat and the Twins dude with the Budweiser ad, missed the cut).

TheHitKing said…
Good set of cards, far from "best of 2011". That Christi AG was my first taste of celeb champions this year, so it has a special place in my heart. I agree on 2011 Update Series and there superb picture choices and 'action' takes. I think AG ballplayer cards deserve more credit, the action ones like Scott Rolen or Brandon Phillips (tryin not to be Reds biased, first to come to mind). I also think the AG Freddie Freeman Rookie Card looks timeless. Topps Heritage deserves nothing here (not even relics). I actually like 2011 celebrations. Stadium Lights!!! YES PLEASE! this is the first set I set up this year! even my wife played with them! Topps 60 were EPIC! like it or not, who doesnt love hittin some of those names?
December 29, 2011 at 8:26 PM

night owl said…
If sexy was a requirement, you would see no MLB players on this list.

As for the horizontal A&G shots, I'm already on record as wanting them out of A&G. They're the only horizontal shots that I've seen that don't work. (Way too much empty space, blurry, etc.) I'd find the blog post, but I'm too busy toiling.
December 29, 2011 at 8:37 PM

hiflew said…
The horizontal aspect is my only fault with the Dee Gordon card. It is a beautiful shot, but I am just not a fan of landscape cards in the flagship set unless the whole set is landscape. I guess it goes back to when I first started collecting. I started in 1986 so there weren't any landscape cards in the main set for the first five years of my collecting life (aside from the random subset card). They just seem to throw off the look of a set especially when they are in pages. That being said, it is a great card and it is nice to see the Seth Smith get recognition. I thought I was the only one that loved that card.

Anonymous said…
I've got my favorite being posted in 2 days. It didn't make your list, but that's probably because I'm completely biased.
December 29, 2011 at 10:40 PM

Two Packs A Day said…
my favorite card is Trayvon Robinson's 2011 Bowman Draft card. It shows him going after a ball in the left field stands and I seem to recall that play probably happened in his second MLB game (in his debut he had a catch jumping towards the outfield wall, but I don't recall this play in the left field stands happening in the same MLB debut game).
December 30, 2011 at 7:16 AM

TheHitKing said…
just walkin' out the door, no time to find the card...Who was on the card with the Budweiser advertisement on the wall...outfielder tracking a fly ball if i remember correctly..cool looking card, lots of color
December 30, 2011 at 8:27 AM

Fuji said…
Damn... I still can't figure out why Yamaguchi married a 6'2", rich, hockey player and not this short, Japanese guy who collects cardboard.

--David said…
Super post!! I think it is a LOT easier to "catch" players in midflight these days since cameras can basically capture 30+ frames of still shot per second. The skill involved is not nearly what it used to be. Having said that, it still doesn't take away from the fact that action shots rule. Period. And a Triber on the list to boot! WAHOO!
December 30, 2011 at 11:33 AM