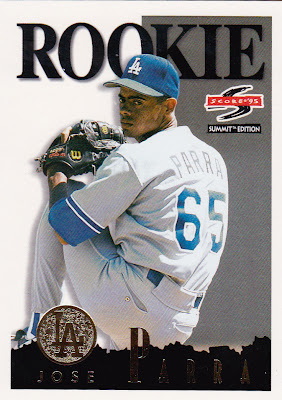 Not really. There's maybe an inch on the ground, if that much. But it's the first significant snow that we've had here this season. Considering that I've seen snow in Northern New York before Halloween, that's pretty notable. Some people are actually bent out of shape (re: my daughter) that we haven't been hit with a blizzard yet.

I've driven and walked through my share of Christmas rain the last three weeks, so I'm happy to see some snow, too. And it gives me an excuse to stay home and catch up on card filing, posting and mailing. I mean, I can't do anything else! I'm snowed in!

So, here I am inside and featuring some cards I received from hiflew at Cards From the Quarry. After this, I'm going to work on some card packages. After that, I might pretend I'm from South Carolina and run outside screaming because there's this weird white stuff on the ground. 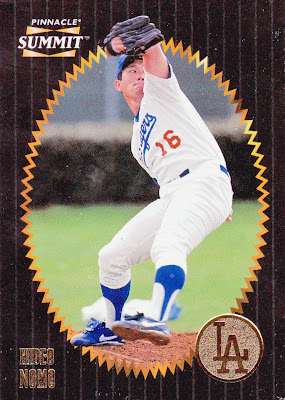 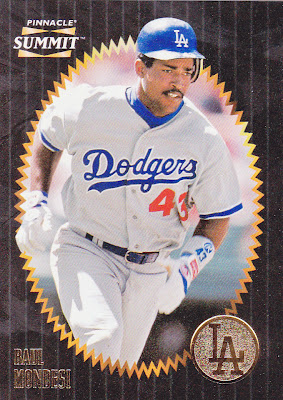 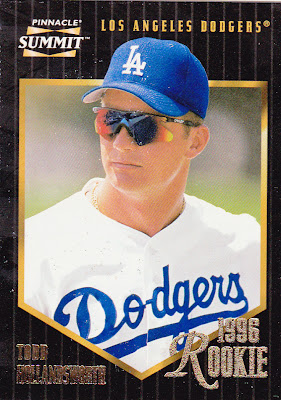 Here is Hideo Nomo card No. 347 for the collection, followed by two of his friends, fellow Rookies of the Year Mondesi and Hollandsworth. The backs of the base cards in '96 Pinnacle Summit feature a monthly statistical grid superimposed in white type onto the colored image of a baseball diamond. It creates instant eye strain and was part of the famous 1990s plot by card companies to make collectors go blind. 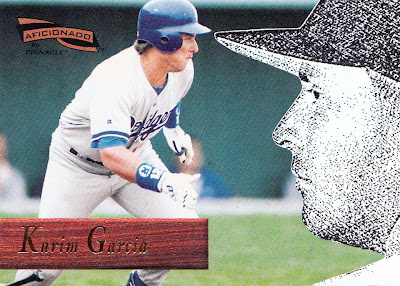 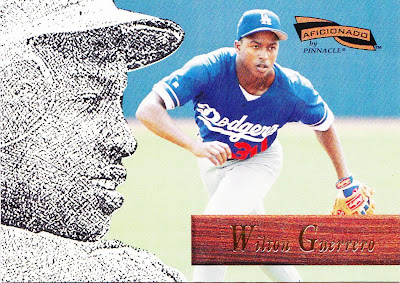 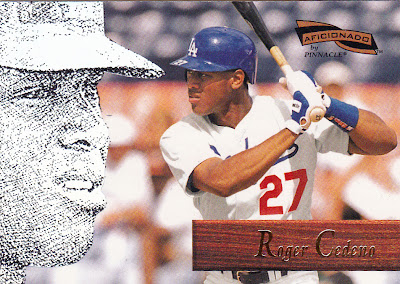 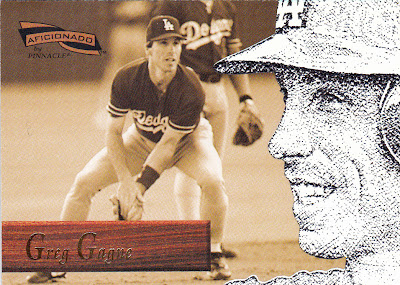 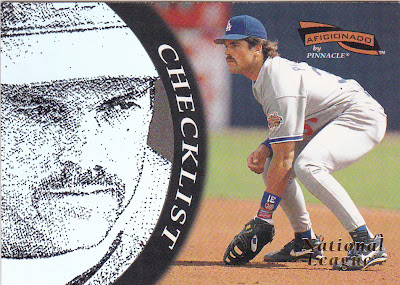 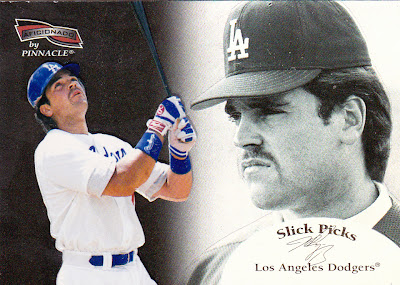 Here is a whole mess of 1996 Pinnacle Aficionado. I've said before that I can only stomach these cards in small quantities. But I'm not leaving the house today. So if I get sick, no one's gonna know.

I don't know why I react so harshly to these things, but I remember another collector calling them "grotesque," so I'm not the only one. By the way, the last Piazza card isn't as bad. But I am not enjoying the "Slick Picks" heading.

Lastly, I can never, never, never spell Aficionado correctly the first time. I misspell it every time. If we were still living in a world of typewriters and whiteout, I would have already ripped up a card by now. Misspellings are evil. 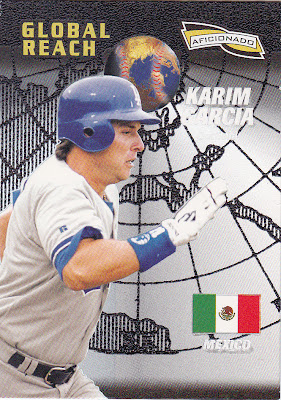 This card's nice. Perhaps I was a little harsh on poor '96 Aficia ... gah! ... you know what I mean! This insert card from '96 Affy is a lot better than those others. And it puts my Karim Garcia collection into the mid-60s! You've got to love the '90s. One of the decade's most famous mottos is "Mass Quantities of Mediocrity." Really. It is. Go to Washington and look it up in some museum. It's there. Somewhere. 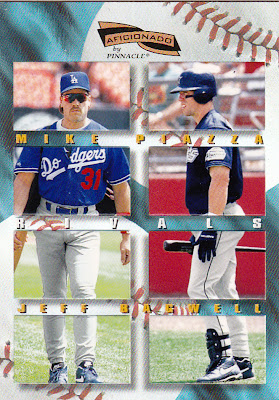 OK, last card and last chance to pick on poor '96 Affy. This card is endlessly amusing in a disturbing sort of way. I just saw it displayed on someone else's blog and I thought "that card looks like some serial killer's plan to section up two of major league's best hitters into quarters and store them in his freezer!

Thank goodness that blogger's imagination wasn't as weird as Night Owl's or that stupid thought might have actually escaped onto the blogs for everyone to read.

But really, look at the thing. Who actually thought this was a good idea? And did they check that person's apartment after he drew up the designs?

As an aside, Piazza and Bagwell never really were rivals. Kind of have to be in the same division for that.

So ... after tearing apart the cards that I got from Cards From the Quarry, I'd just like to say,

Thanks, Cards From the Quarry!!!

Really, I have a little fun at the cards' expense, but any chance I have to check cards off the crazy want list, it is thoroughly appreciated.

Especially on days like these with an inch of snow on the ground.

Gee, I hope I have enough food in the house.

hiflew said…
Always remember it is much better to get a big chunk of an ugly team set at the same time, so you can get all the sickness out at once.

I am stuck getting one single 1997 Circa card at a time, so I get a little sick every time.

Glad the cards arrived and hopefully I can find some more junky cards for you in the future.

flywheels said…
You got us South Carolinians. We do freak out when we get even the smallest amount of the "white stuff" on the ground. First thing that goes is all the milk and bread at the grocery stores!

The Lost Collector said…
We had that random snowstorm in late October and zilch since. After growing up in Binghamton and spending four years in Syracuse, I can understand why you aren't complaining. It'll come.
December 17, 2011 at 4:52 PM

dayf said…
The best thing about Pinnacle Aficionado is the smell. I will never ever forget that smell. Imagine if you were dying of chemical poisoning but really liked it. If you give those a good snort you might get a whiff of it.
December 17, 2011 at 5:38 PM

Anonymous said…
I've never noticed this before - but it's interesting to me that one year it was Score Summit, then it was Pinnacle Summit. I wonder what the reason for the change was? Did that make it seem more high end? If I remember right, Summit was Score/Pinnacle's attempt to compete with the super premium cards like Finest, SP, and Flair.
December 18, 2011 at 5:13 PM