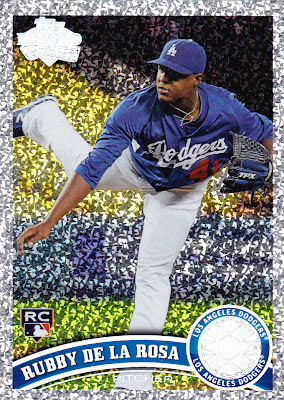 This is one of the fancier night cards that you will see. The base card version is snazzy as it is, with the artificial night light glowing behind Rubby De La Rosa's fireball delivery. But the diamond parallel version? Tremendous.

I was lucky enough to be able to snare this from Jeff of My Sports Obsession. Jeff was just minding his own business, trying to post cards on his own blog, for crying out loud, when a gaggle of Dodgers bloggers descended upon him. When I first started as a young blogger, the primary team of choice for bloggers was Indians, Mets or Braves. Now it's Dodgers.

It creates awkward situations in which unsuspecting bloggers don't have enough of my favorite team to go around because hungry Dodger collectors surround them constantly while screaming "FEED ME!" I've missed out on a card or two because of this, but I know how to work a room, so I haven't been forced to shop elsewhere yet.

And I won't if I can continue to get cool cards like the De La Rosa night card. 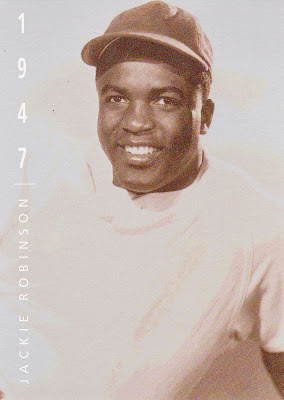 Jackie is awfully happy about displaying no allegiance whatsoever, isn't he? I'm generic and I'm proud!!!

It took a little research but I figured out where this card originates. As a tribute to the Ken Burns' Baseball series in '94, Upper Deck produced a set called "Baseball: The American Epic".

But there were also UD American Epic sets from General Motors and Little Debbie. This particular card is from the 15-card Little Debbie set. Robinson's the only Dodger in the set. Or, excuse me, the only "Team That Must Not Be Pictured" in the set. 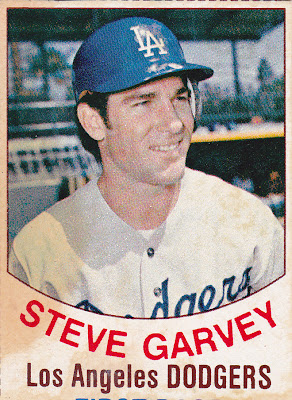 The other charming item is a smaller-than-usual 1977 Hostess Steve Garvey.

It features the usual snack cake stains that most Hostess cards, do. But you probably can tell that the bottom of the card has been trimmed so the position designation of "First Base" is barely showing (especially on this scan).

The best part of this scissor butcher job isn't revealed until you turn the card over. 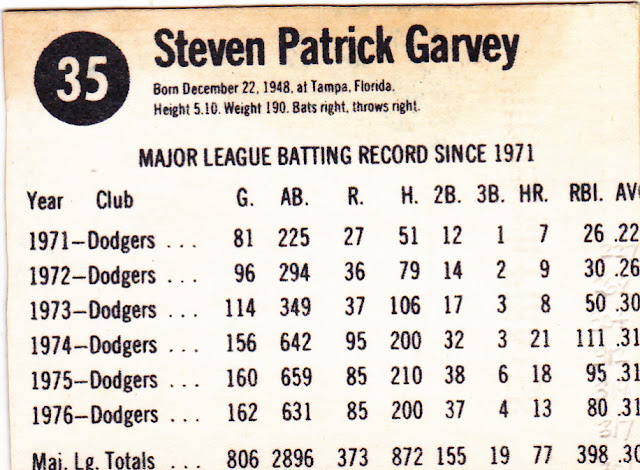 It's difficult to tell, even after blowing up the scan, but someone wrote in Garvey's season-by-season averages because the printed versions had been cut off.

I don't know if this was done by the person who trimmed the card panel, but let's pretend it was. Because that would be something I'd do as a kid.

I wasn't the most accurate person with scissors. And if my cutting ability didn't meet my wildly unrealistic expectations, I'd panic and try to cover up the disaster by doing things like this -- Quick!!! Write in all the averages!!!! Nobody will notice!! My pencil scrawls look JUST LIKE dark, typewritten numbers!!!

Of course, nobody was going to look at the card but me, probably. But it's the principle of the thing.

Besides, you never know, somehow the card might end up in the hands of a futuristic blogger and then he'll write, for everyone in the world to read, about your haphazard cutting ability and your pathetically hasty attempt to fix the situation.

That would be embarrassing, huh?

Sorry, dude who couldn't cut straight. I feel your pain. Really, I do.

That's why I wanted the card.

Jeff Laws said…
Thanks for the trade. I'm back down to little to no Dodgers because of all of you. I need to collect Dodgers as much as I do Sox just to feed all of you.

Actually, I'd do that just because you Dodger bloggers are the best traders. Even that guy about me.

I didn't even notice the handwritten averages on the card. I didn't really look at it all that close since it was trade bait. I debated on even grabbing it because of the stains and miscut but one thing I've found out about most real card collector's, condition doesn't always matter. So I grabbed it anyways.