The original card blog wasn't a blog at all

December 26, 2011
Every once in awhile there is mention about which blog was the first to relay their unimportant-yet-fascinating thoughts about baseball cards to the world at large.

Was it Stale Gum? Was it the Baseball Card Blog? Was it Cardboard Gods? Was it some forgotten blogger who was really first but through a series of cutthroat secret collector meetings was forced from his mother's basement into a life of productivity and riches?

It's silly and pointless talk. It doesn't matter who was first. What matters is that collectors are enjoying commentary and insight from a variety of points of view every 24 hours or so. I've been gleaning insight for almost four years now and not once did I wonder who was first.

Besides, I already know who was first. And it wasn't a blog at all. 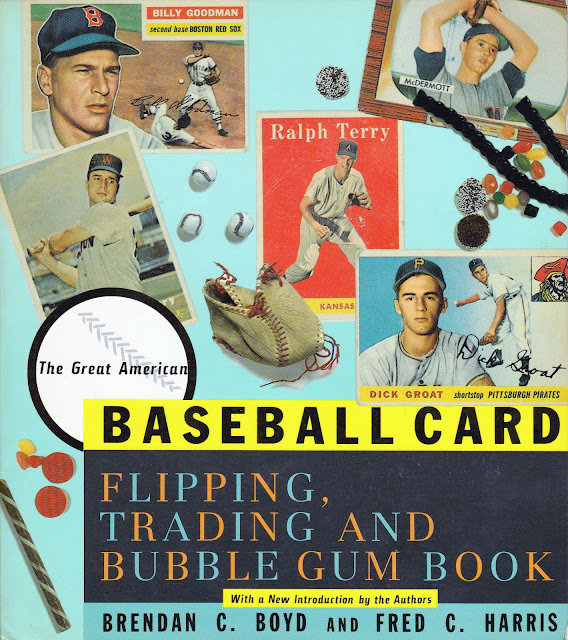 This is the first card blog. And I'm not the first person to say that.

I received this book from my wife for Christmas. I have wanted it since there was an explosion of references to it on the card blogs three years ago. I had never heard of the book until then and couldn't believe I had gone so long without knowledge of it. But I quickly forgot about that while reading what the book had to offer.

In fact, one post about the book back then was so thorough and accurate that I'm not going to bother going into many details. I'll just say the book is a quirky, irreverent-yet-loving look at baseball cards from the 1950s and '60s. It was published in 1973. So if you think you're the first blog to wax poetic about the bat boy who posed as Aurelio Rodriguez on his 1969 Topps baseball card, you be wrong. It was done shockingly well in '73.

"The 1969 baseball card of Aurelio Rodriguez is not Aurelio Rodriguez at all but the Pittsburgh Pirate bat boy. This is in the nature of a little joke by Aurelio who could very easily be mistaken for a bat boy, except that most bat boys could easily outhit him. And were considerably more mature in the bargain."

The book came out during the '50s nostalgia boom of the early '70s. The Boys of Summer. Happy Days. American Graffiti. Grease. It was the first nostalgia wave that I ever experienced. Of course, I knew nothing about the '50s except what I saw on Sha Na Na and Laverne and Shirley. But the shows sure made me want to live back then.

The book does the same. Fantastic cards of Walt Dropo, Galen Cisco, Cuno Barragon and Neil Chrisley ("Pssst! Neil Chrisley's real first name was Barbra. Pass it on") mix with cards of the more established like Sandy Koufax and Ernie Banks. None are spared, yet you get the feeling that the players would fight to be included in this book. I was briefly outraged when I thought that there was no mention of Don Mossi until I accidentally stumbled upon a reference to "loving-cup ears." My eyes immediately darted to the right and there was Mossi's 1964 card. 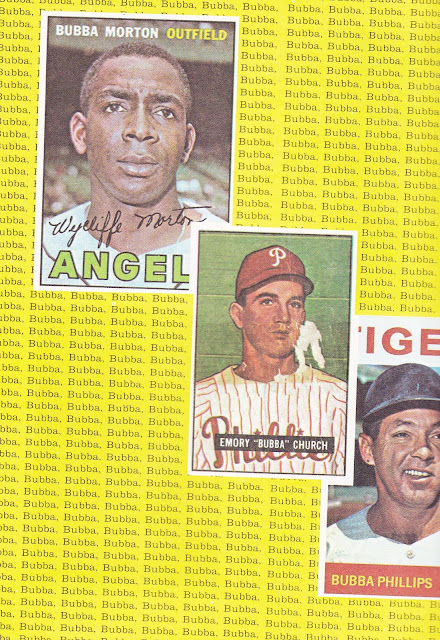 This made me laugh out loud. 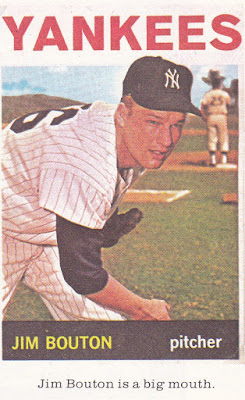 Keep in mind, I haven't read even one-tenth of the book.

There was "Card Sharks" and "The Card" and "Cardboard Gods" and "Mint Condition." But the majority of those books are serious-minded tales, leaning toward expose. Even Cardboard Gods, which is much more in the spirit of my kind of writing, tends to be too introspective for me at times.

But the Great American Baseball Card F, T & BG Book? That is writing after my own heart.

Cards are meant to be fun, not serious. This book is fun. In case you desperately need something revealing, there is an interview with Sy Berger inside the Topps walls.

But enough about that. I like having fun with cards, whether I am loving them or am being critical. I try to keep it in the spirit of frivolity.

I like nostalgia with my cards, too. And this book is 100 percent nostalgia. No crabbing about collation or "pack out" or patch scams. Yes, it may not be for everyone, but it's definitely for me.

Nostalgia is a funny thing, too. It can be as personal as my memory of my grandmother's molasses cookies. It can be as communal as a shared hobby like baseball cards. And it can be a nationwide phenomenon like the Back to the Future movie franchise.

But it takes great writing and a sense of humor to get someone like me -- who never had a Roy Rogers lunch pail and could never buy anything for a nickel -- to laugh knowingly and relate totally when he reads the line "Who the hell is Bill Renna?"

Today, the Great American Baseball Card book lives on in our blogs. In every reference to Oscar Gamble or Ed Lynch or a shirtless Ron Gant.

The updated version of the book might be called "The Great American Baseball Card Blogging, Grading and Pointless Inserts Book." (And, yes, I have dibs on writing it).

But it'd still be fun.

It would be an ode to the book/blog that came first.

Nick said…
I've got that book! One of the best books I've ever read. I'll bet that it's the first book that deals with exclusively baseball cards.
December 26, 2011 at 9:30 PM

Greg Slomba said…
I received this book for Christmas when I was a kid (probably around 73 or 74). Somewhere along the way, it got away from me. Some of the posts really cracked me up. I remember one about John Roseboro and his continually pop eyed expression in cards after the Marichal incident.
December 26, 2011 at 10:32 PM

Stealing Home said…
your old lady has great taste n.o. it was a perfect choice, as i'm sure you already told her.
like nick, i've got the book myself.
read on and enjoy, brother. i'm now off to my bookshelf to find my copy and re-read.
December 27, 2011 at 1:28 AM

capewood said…
I bought a copy of the book on eBay after reading the Dinged Corners post about it. It's a great book if you're a collector.
December 27, 2011 at 9:05 AM

Matthew Glidden said…
Wonderful work in that book. My fave from page 57, opposite a picture of the 1952 Topps card of Clyde Kluttz.

"Despite all apparent evidence to the contrary, there has never been, nor could there ever be, a major league ball player named Clyde Kluttz."
December 27, 2011 at 9:20 AM

GOGOSOX60 said…
Got the book in 1975 when the first wave of "baseball cards as an investment" phase started and got the paperback version update of that period.

EggRocket said…
Great post and a great salute to a great book that was well ahead of its time. I read the book in the late 70s or early 80s and loved it. One thing I remember is getting the real squeal on Charlie Lau, who was getting a lot of attention at the time for being George Brett's hitting coach.

I just finished "Cardboard Gods." It was one of those rare books that I couldn't put down and had to keep reading until I was finished. But it has a bit of a split personality. It quickly goes from nostalgic to bittersweet to downright depressing with just the faintest attempt to pull out of a spiraling death-crash on the last two pages.

I think Josh started writing a "Flipping" book but decided about two thirds through it that he wanted to write "Basketball Diaries."
December 27, 2011 at 5:41 PM

deal said…
great summary of a great book. Someday Team Phungo will get around to posting a few items related to the book.
December 27, 2011 at 6:13 PM

Chris Stufflestreet said…
I wrote a review about this book on my blog back in February:

I Reverently Call it "The Book"

You forgot to mention the page where several umpires from the 1955 Bowman set appear, with the backdrop being a single repeating word: "Boo."
December 27, 2011 at 8:39 PM

Sascards67 said…
The Johnny Unitas picture and comment in this book are my favorite. If you haven't read this book you are missing out on something that every card collector should read.
January 1, 2012 at 2:28 AM