December 23, 2011
(Do people know it's two days before Christmas? Great snowcones, I can't believe how many "what is WRONG with humanity?" moments I had yesterday! Be good, everyone. Santa is watching! It's time for Cardboard Appreciation. This is the 129th in a series. Oh, and stop being a jerk.) 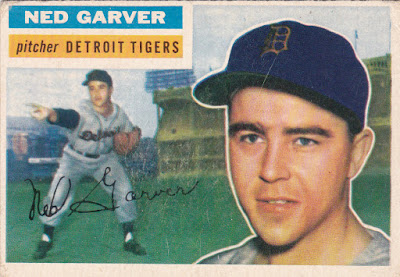 Anyway, this card is here for one reason. 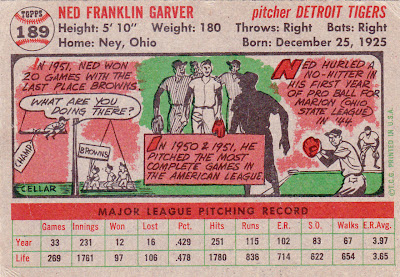 No, it's here because Garver is one of those people who was born on Christmas Day.

As someone who has never left his childhood behind, this is endlessly fascinating to me. What luck/what a burden to be born on Christmas!

As a kid, I thought anyone born on that day would receive an unimaginable number of presents. Christmas dinner and birthday cake on the same day! Then, I realized (mostly because my mother was born very close to Christmas), that the opposite was true. In many cases, it's very difficult to get people to notice your birthday with such a giant holiday standing next to it. "Oh yeah, I guess I got to get a gift for the birthday boy/girl, too. Mutter, mutter."

The most famous player born on Christmas is Rickey Henderson. He's the first player I ever heard of born on Christmas, and I immediately wondered what the day was like for him. Did he get a ton of gifts? Did everyone ignore his birthday? Henderson grew up an African-American, in a large city, in the back of an Oldsmobile, without a father for almost his entire life. I grew up the opposite of that. So, really, I have no idea how Rickey celebrated his birthday/Christmas.

Also, as a kid, I thought it was rare to be born on that day. But it's not. It's just a day like the other 364 for a baby who is ready to be born. As evidence, here's a semi-decent team of players born on Christmas Day:

OK, the lineup has holes. No real catcher other than a backup. The starting staff is suspect. Trillo is playing out of position. Any team willing to put Willie Taveras in a uniform has issues.

But that's all right.

Think of the combined presents they received on Christmas!

Bo said…
That's actually a really good team when you are considering that that is 1/365 of all major leaguers. I wonder if Christmas is the only day which has three HOFers sharing a birthday?
December 23, 2011 at 10:24 AM

TheHitKing said…
Not only was Ricky Henderson born on Christmas, he was born in the back seat of a car on the way to the hospital. He always joked about even being born fast! One of the best players in history too!