December 01, 2011
At the start of this year, I ran through all of the trifectas in my collection. That is, players in which I own their rookie card, a relic card and an autograph card.

I first heard of the trifecta from Drew's Cards and have thought it was an awesome idea ever since.

Yet, as awesome as it is, it's not really one of my collecting objectives. I simply luck into trifectas through trades or group breaks or the occasional purchase. It's almost by accident.

This year I lucked into just two trifectas, and here they are: 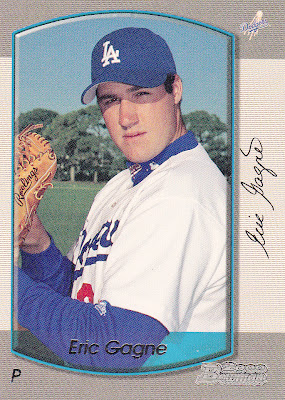 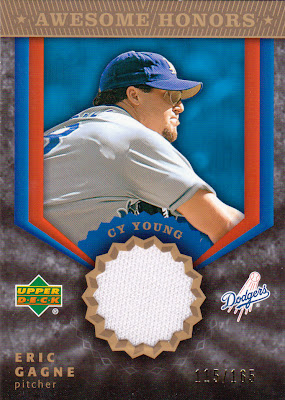 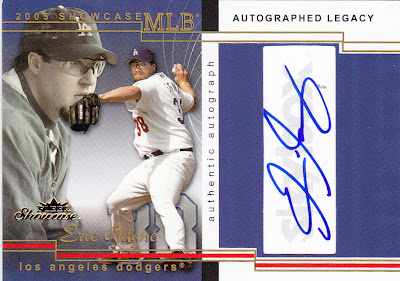 Eric Gagne is trifecta No. 16.

As usual with these things, I'm a little unclear on the rookie card, since card companies obliterated anyone's comprehension of a player's rookie card over the last 15 years or so. Gagne's first cards pop up in 2000. I went with the Bowman card because it's the "Home of the Rookie Card," which is unsually nice of me. Usually, Bowman's bragging would automatically make me declare Gagne's 2000 Metal card as his TRUE rookie card for all-time and I would commence burning a whole pile of Bowman cards in the front yard. However, my head has been hurting me for three days and I can't afford to make trouble. 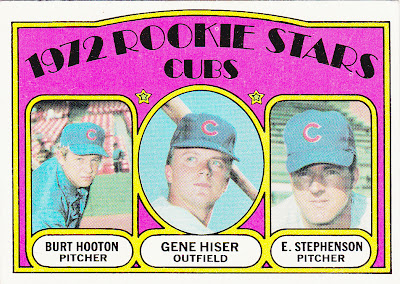 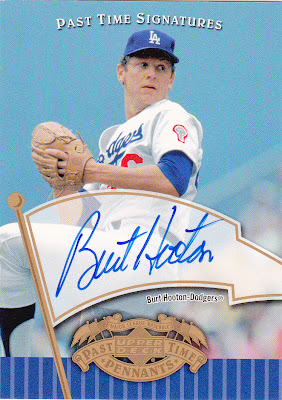 Burt Hooton is trifecta No. 17.

It also may be the most colorful trifecta that I have, which automatically makes it dy-no-mite.

If you haven't seen the first 15 trifectas, take a gander here. I may have to update the Clayton Kershaw trifecta, as it's yet another puzzling rookie card situation (he's got Team USA cards in 2005 but doesn't appear in a major league uniform until 2006. Head, stop throbbing!).

I plan to accumulate even more trifectas in the coming year. How hard can it be to find a Shawn Green autographed card to go with my uptillion Green relic cards?

But like I said, I enjoy ending up with trifectas purely by accident -- or at least purely by my desire to own Dodger cards.

That way I can call them Accidental Trifectas.

The muddled concept of a rookie card is nonsense these days. I loved the 3-or-4-to-a-card rookie cards that Topps did in the 70s. To me those are the only true rookie cards. These days we're glutted with skads of "prospect" cards, which is all Bowman seems to be. One problem is that the cards are released long (sometimes years) before the player actually plays a full season in the majors. If a player wins the rookie of the year award I don't think that his "rookie" card should be from several season prior to his actual rookie year. Buster Posey (sorry Dodger fans) won the ROY in 2010 but there was all kinds of wierdo cards of him in 2008.
December 1, 2011 at 11:07 PM