I am about as horribly inefficient as I have been in months. Woefully behind with holiday stuff. Slacking on the job. Lazily avoiding any blog posts of substance. I don't know what it is.

During my daily downtime, I end up plopping in the recliner and catching up on Parks and Recreation episodes on Netflix. That's been my ritual pretty much for the last week or two. If it's late morning or late night after work, it's time for Ron Swanson and the gang.

I know doing nothing is Swanson's style. But I don't have a government job, and this isn't good.

I've periodically viewed people's addictions to weekly episodic TV as depressing and a sign that they're in a funk. Well, I'm in a funk. There's no doubt about it. I'm not being productive at all. I feel stagnant. But I figure I might as well laugh at 11 a.m. and 1 a.m. each day.

More TV viewing also means not much time for blog stuff. Plus, I've got to get ready for a long-ass travel day at work tomorrow.

So here are some quick observations about cards. Don't blink or it'll all be over. 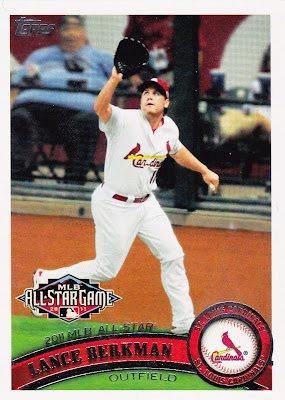 So, if Lance Berkman's nickname is "Fat Elvis," then what on earth is the nickname of the guy seated in the top left corner? 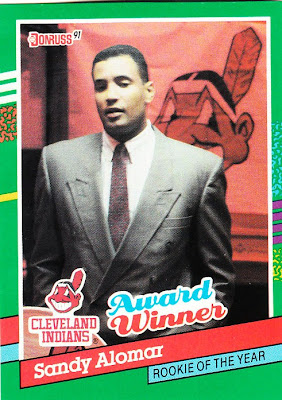 Is this the red tint version of Sandy Alomar's 1991 Donruss card? What a strange card. 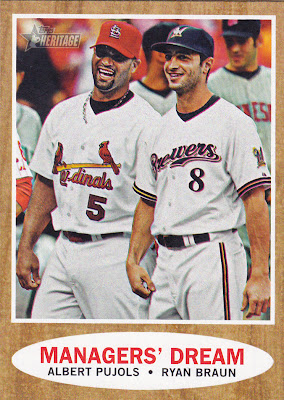 So, uh, anything happen with you two guys last week? 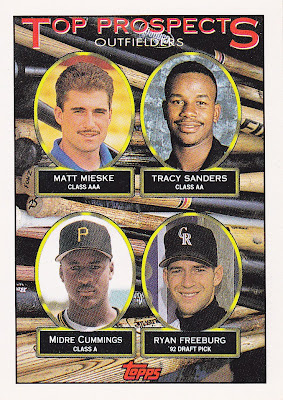 I find the mustache on Matt Mieske so appalling that I want to turn this card into a diecut by removing the upper left corner of the card and then using that corner for air rifle practice. 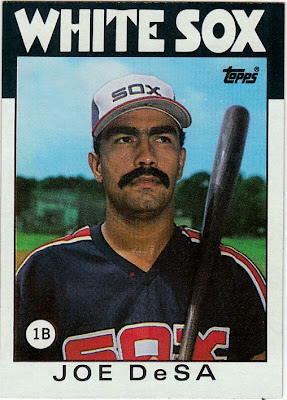 Now THAT'S a mustache that would make Ron Swanson jealous.

And that's all the observations I've got for you.

It's been days since I've had bacon.

And now I hate everything.

Hope I'm back from my trip in time for Thursday's episode.

Play at the Plate said…
I'm gonna go with fat "Fat Albert for #1. And that last one looks like one of those little toys where you use the magnet to spread the metal shavings on the little guys face.
December 15, 2011 at 3:09 AM

Sandy Alomar - I had no idea... spent 10 seconds staring at the card and nothing came to mind.

Joe Desa - Knew it had to do with his thick facial hair (both the brows & the mustache).

deal said…
Quick Observations were great. fits into our fast food information culture. plus anything introduced by Ron Swanson rocks.
December 15, 2011 at 7:14 AM

dayf said…
We want the funk! Gotta have that funk! OW!

Nothing wrong with being funky. It's not like there's anything going on in the baseball card world right now.

Forget the mustache, check out Joe DeSa's eyebrows! Those are some powerful eyebrows.
December 15, 2011 at 10:33 AM

Play at the Plate said…
I never watched an episode of Parks and Recreation until I read this post. I just finished episode 3 and Ron Swanson makes the show. His commentary in Episode 3 about what he is looking for in a government employee is hilarious.
December 16, 2011 at 6:00 AM