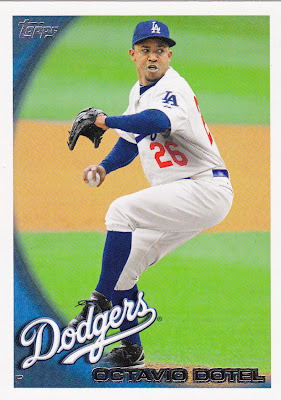 A couple of weeks ago, the Tigers announced that they had signed right-handed reliever Octavio Dotel to a one-year contract.

Reports noted that when Dotel takes the mound in a Tigers uniform for the first time next season, he will break the record for appearing in the major leagues with the most teams -- 13.

Right now, he is tied with three other players who competed for 12 teams. 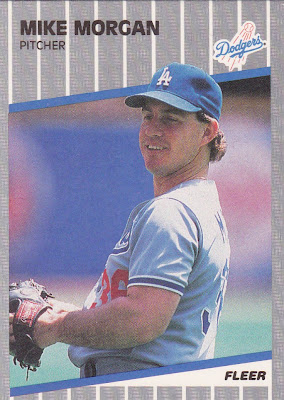 Mike Morgan. A guy who did his best work for the Dodgers. 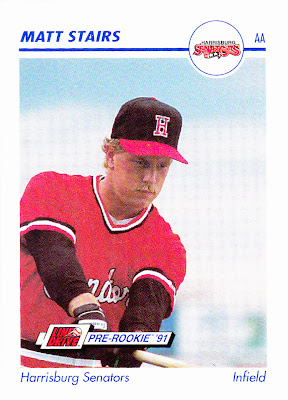 Matt Stairs. I enjoy featuring this minor league card of his. 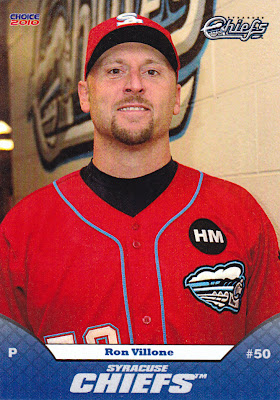 And Ron Villone. Another minor league card. But I have no major league cards of his, and this might've been his last card.

I believe Villone is retired. Stairs has retired, too. Morgan retired 10 years ago.

So, Dotel, who is 38 and could still play for a couple more years, is free and clear. At the rate he's going, he could end up playing for 15 or 16 teams by the time he's done.

But as far as being the player to appear for the most teams ON A BASEBALL CARD, I'm pretty sure that Morgan remains the champion.

I wrote about this before. With the help of some readers, I was able to pinpoint that Morgan appeared on a card for all 12 of his teams. He was helped in accomplishing this feat because he was a starter for most of his career.

Meanwhile, Dotel has barely started in his career. Same goes for Villone. And Stairs was a glorified pinch-hitter for some of the teams for which he played.

As we all know, card companies are biased against relief pitchers and role players. They'd rather we collect 7 different versions of Albert Pujols than be forced to look at ewwwwwwwwww, a LOOGY. So I'm almost certain that Dotel, who is more of a ROOGY, didn't appear on a card with all 12 of those teams.

It would be nice if Dotel was the champion of appearing for the most teams both on the field AND on baseball cards. If someone wants to see if they can track down cards of Dotel with 12 different teams and then hope to heck that Topps gives him a card as a Tiger, go to it -- you have more time four days before Christmas than I do.

But for now I think Morgan still holds the title for the baseball card portion of the honor.

If it is an honor.

hiflew said…
Well, I know for a fact that there are 0 Dotel as a Rockie cards. I was actively searching for him a couple of weeks ago. Same with Villone. But then the Rockies are usually that short end of the stick with relievers

There needs to be a set for just relievers, perhaps Bowman Set Up and LOOGY, it's not like that would be more ridiculous than their other sets.
December 21, 2011 at 8:44 PM

Anthony Hughes said…
Thanks for the article. I have wondered a few times who had that distinction, and I always figured it must involve Mike Morgan in some way or another.

I wonder if anyone would ever break Dave Kingman's record for most ML teams in a single season.
December 21, 2011 at 9:52 PM

Nick said…
Unfortunately, Dotel doesn't have a card issued of him as a Pirate or Rockie. His 2010 Update issue caught him in between those two teams in his short stint as a Dodger. I know he's got at least one on all the others because I've got them. I wish they'd feature more bullpen/bench guys on cards nowadays!
December 22, 2011 at 3:44 AM

GCA said…
This is why I started my Royce Clayton player collection.
I considered Kenny Lofton too, but the majority of his cards depict him in Cleveland.
I mostly researched base Topps and Upper Deck. Don't do Bowman...
December 22, 2011 at 8:23 AM

Orioles Magic said…
That's a great Senators card of Stairs. They were my local minor league team growing up and they were wearing very similar uniforms when I started to follow them but I didn't remember that Matt played for them, so I guess it was a bit before my time.
December 22, 2011 at 11:29 AM

Anonymous said…
This is the kind of USEFUL (OK, maybe useless) info that I would love to know. Any clue how many different teams the guys other than Morgan have cards for?
December 23, 2011 at 2:32 AM