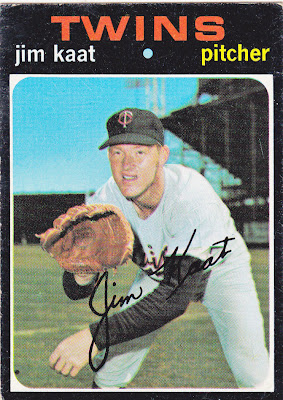 Three of the 10 people up for Baseball Hall of Fame election by the Veterans Committee on Monday have connections to the Twins. Jim Kaat, Tony Oliva and Luis Tiant.

Even though Gil Hodges is also among the 10, I don't really care who gets voted in tomorrow. Just as long as it's somebody.

With that in mind, it's time to see how Topps treated the Twins in terms of colors it used with Minnesota's cards. Did it stick to blue and red, or did it stray into strange colors that you'd never see in the frozen north?

The rundown for the years in which Topps picked colors based on the teams featured on the card:

It looks like Topps kept to the script fairly well, although it went a little crazy in the '80s when it thought orange had something to do with the Twins.

Minnesota's primary color is navy blue, which is a little difficult to pinpoint on cards, I've noticed. Much like the Yankees, the Twins' caps appear black. And to get across that the Twins wear navy, the "blue" Topps used ranged from light blue to blue to dark blue to purple.

I didn't want to lump them all under "blue." But blue basically sums up the color Topps used most often with the Twins.

What Topps thinks are the Twins' team colors: Blue and red 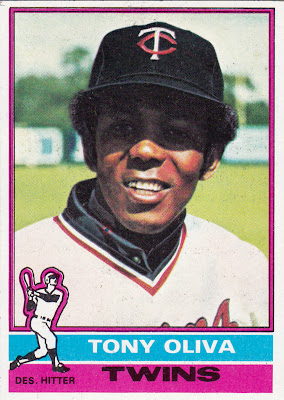 OK, Veterans Committee, don't let me down. It's your American duty to VOTE.

hiflew said…
I think Jim Kaat deserves to get in this year. He is at least on par with Don Sutton and Phil Niekro, with the only difference being those two broke 300 wins while Kaat "only" got 283. Plus, along with Greg Maddux, he is the greatest fielding pitcher of all time.

But you are correct, SOMEONE needs to get elected. If I were a betting man I'd put my money on Santo even though it would have been much better when he was alive to see it.
December 4, 2011 at 2:43 PM

Anonymous said…
Did somebody say Twins?!

Twitch said…
Santo and Kaat's stats pass the sniff test for me. Minoso, Tiant, and Gil are all varying degrees of borderline. I have a feeling Gil gets in at some point though; not sure about the other two. No way on Boyer or Oliva. Oliva was the only one to hit over .300, but the rest of his stats aren't there.
December 4, 2011 at 8:56 PM

Anonymous said…
If Oliva hadn't blown out his knees early on, he'd already be in. Thank God the DH came around when it did, or he'd have been out even earlier. Even with knees so bad he couldn't bend down to pick up grounders, he still had OPS+ of 109, 109, and 103.

Jeff said…
Santo is the best player who is not in the HOF. His numbers were artificially depressed by playing in the 70's. But he was clearly a great hitter in his prime, and add in the 5 consecutive gold gloves....