December 09, 2011
I'm suspending Cardboard Appreciation for a week because I'm working on a couple of things for CA and I don't have them ready yet.

Also, I'm a little annoyed at Blogger stats' tendency to be manipulated by web bots and the skewing of my blog stats (anything with "cardboard" or "sick" in the title automatically becomes one of my most "popular" posts ever).

So tune in for something Cardboard Appreciation-y next week.

In the meantime enjoy some ... 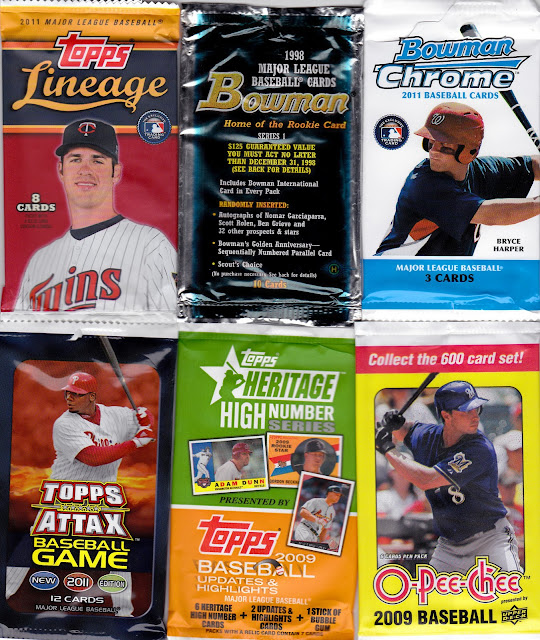 I've mentioned before that I never collected wrappers until I started this blog. But a few months into beginning Night Owl Cards in Sept. 2008, I decided to keep a wrapper for every product I opened.

I don't do anything special with them. I just stuff them into a box in the basement (oooh, that sounded creepy). But every once in awhile I get them out and go through them. They're like a story of my collecting history over the last three-plus years. If you put them all on the ground in trail-like fashion, they'll lead to ME! 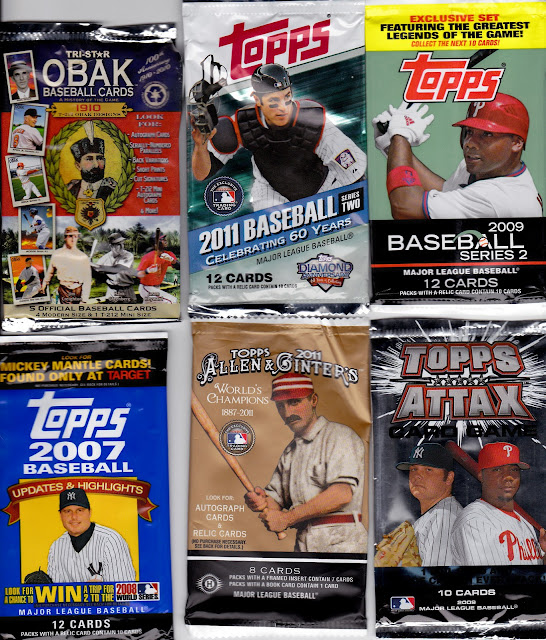 You'll be able to tell from these wrappers that the vast majority of my pack purchasing comes from retail outlets. There are a few hobby packs mixed in here -- including both the retail and hobby versions of the same product. That's allowed according to my "RULES OF KEEPING/DISCARDING WRAPPERS."

Why must I have rules on everything? 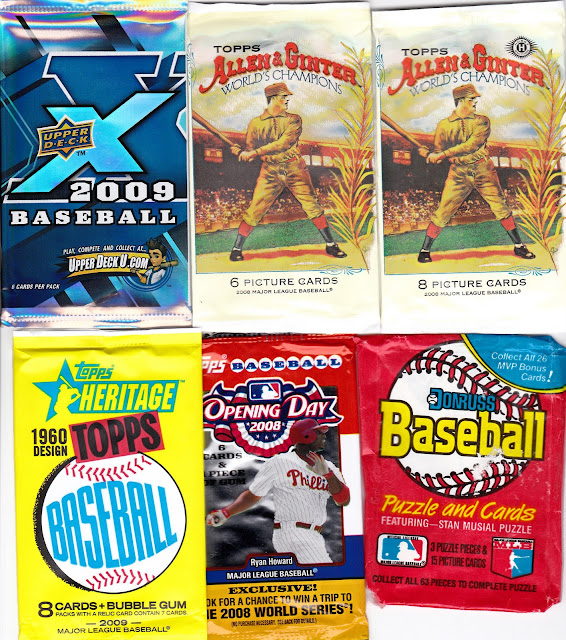 There you see the retail/hobby comparison with Allen & Ginter from a few years back. The late '80s Donruss pack was mailed to me by someone, I don't remember who. But even though I didn't buy that pack, I did keep the wrapper as it's officially a "product I have opened." 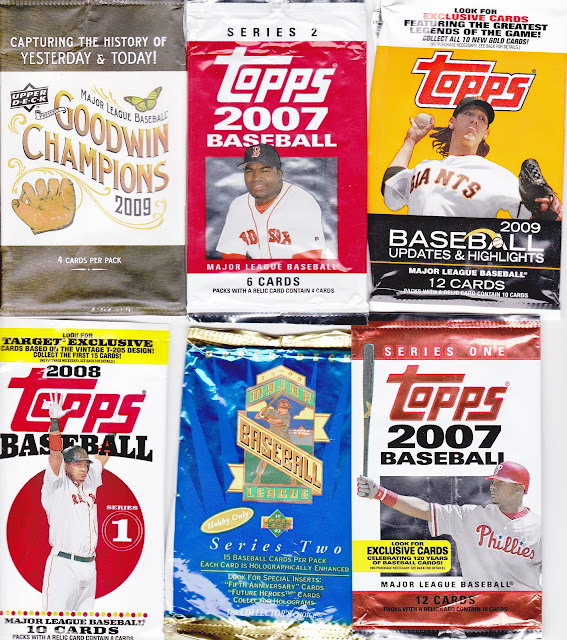 I don't give a large amount of thought to the design/look of wrappers -- probably because a lot of them are covered with Yankees and I try to block it out. But I did like the Updates and Highlights wrapper of a couple years ago. Yes, I know Lincecum is on the wrapper. But the orange wrapper came out near Halloween. And I do love me some festive. 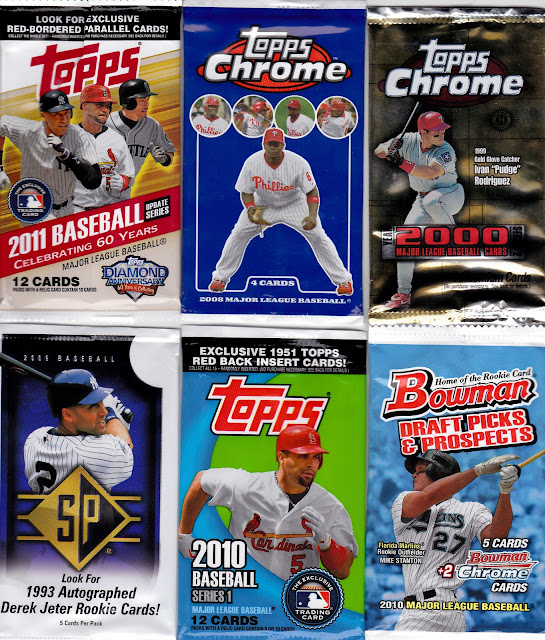 The 2011 Topps Update wrapper is already out of date. And, yes, I actually bought a pack of Bowman Draft Picks and Prospects. I told you, I try everything that is readily available to me. One pack isn't going to kill me. 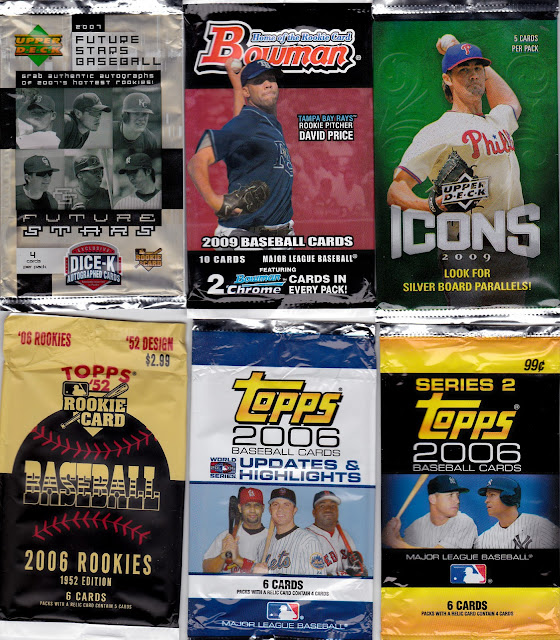 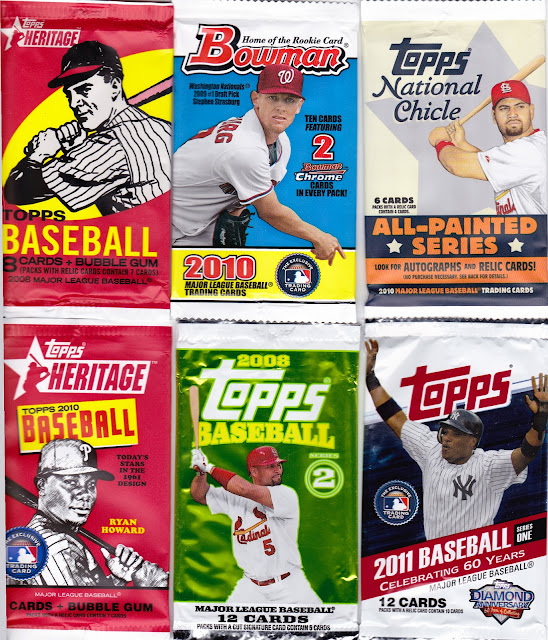 Here are some of Topps' many wrapper darlings. Pujols, Howard, Cano. By the time I'm through showing all these wrappers, you will notice there are no Dodgers on any of them. It's about time for Kershaw or Kemp to be Topps' cover boy. 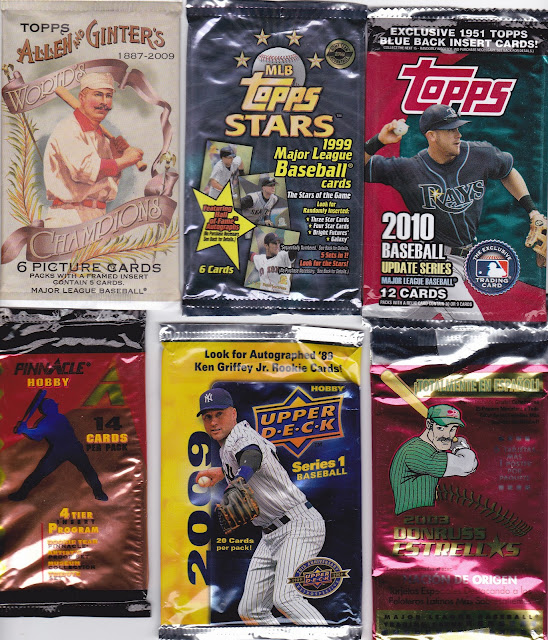 Wrappers come in all sizes. The Donruss Estrellas ones are super long, while some of the older packs are tiny. Blister packs are wax packs all growed up. 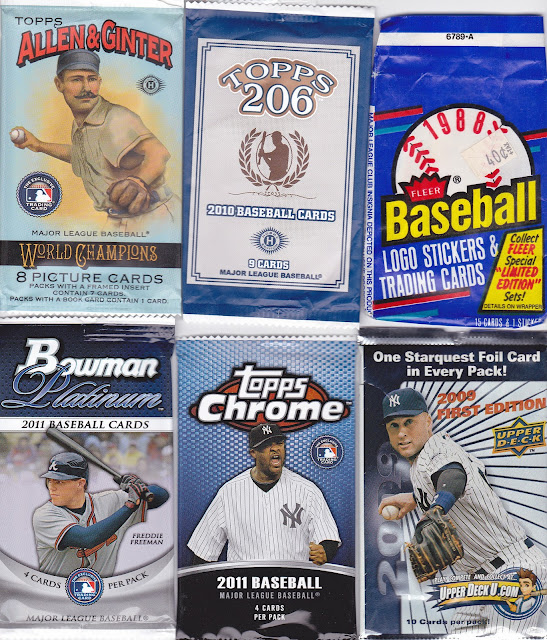 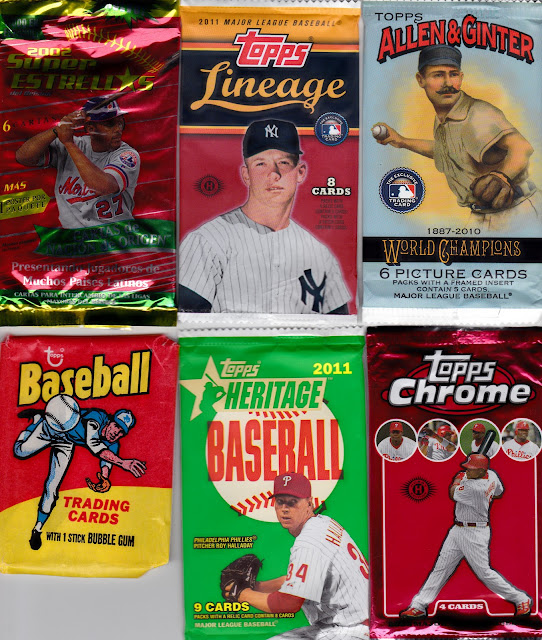 Now, that's more like it! Lots and lots of color. The tiny wrapper on the bottom left is the best wrapper ever, a 1975 Topps mini wrapper. I also like it when there's a different picture between the retail and hobby wrappers, as with Lineage or some of the Topps Chrome wrappers. I know that probably drives wrapper collectors crazy. 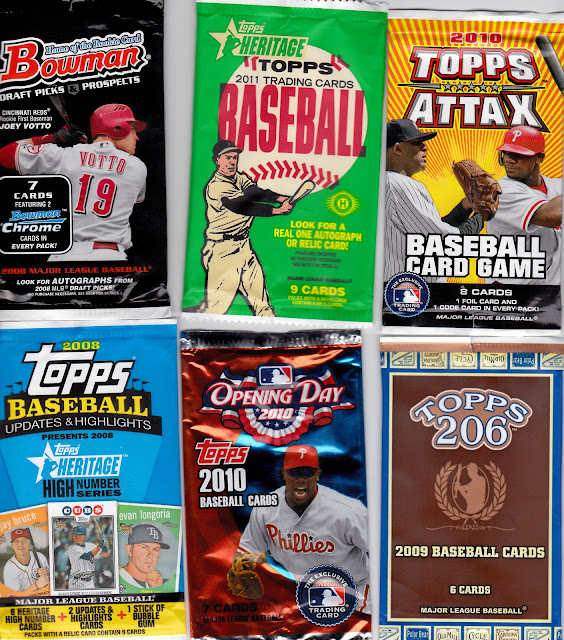 Yes, I buy packs of Attax and Opening Day. If I'm buying Bowman, I'm buying everything. By the way, the 2008 Topps Heritage High Number/Updates & Highlights combo pack wrapper might house the most irritating set ever. The two U&H cards were the ugly step-children out of each pack. 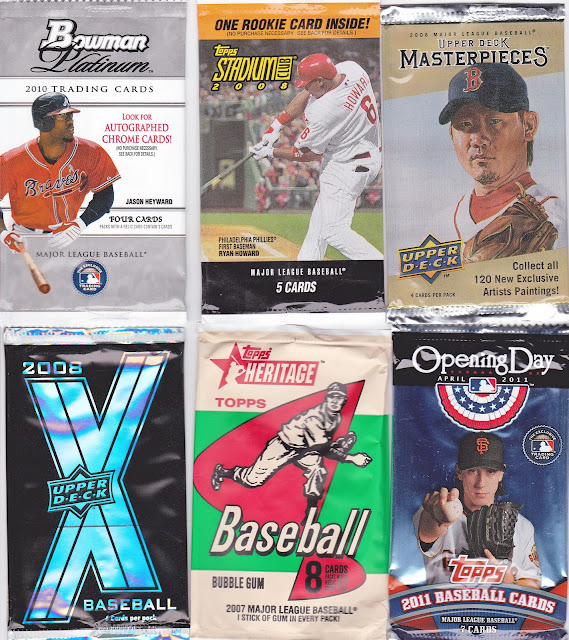 Why do I like Heritage? Eight cards per pack, baby. Read all the other ones. You've got Opening Day with 7 and then 4 or 5 for all the rest. But --- oooooooh -- Upper Deck X is shiny! 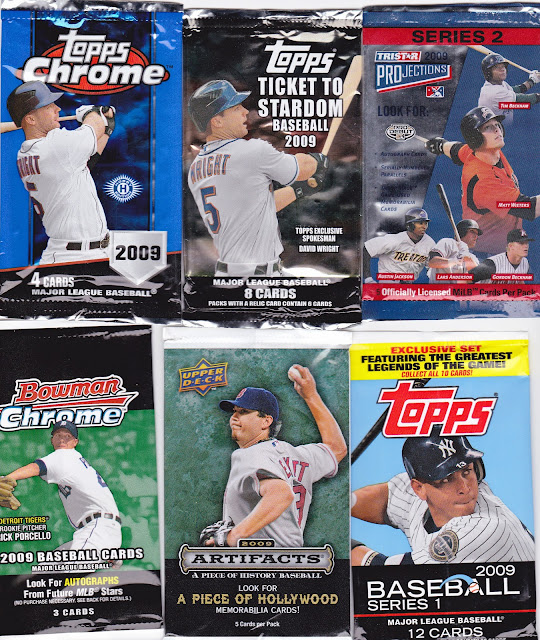 I did not put those two David Wright packs together on purpose. In fact, I'm disgusted that they ended up together. But too lazy to rescan the wrappers. Laziness takes priority over rules. 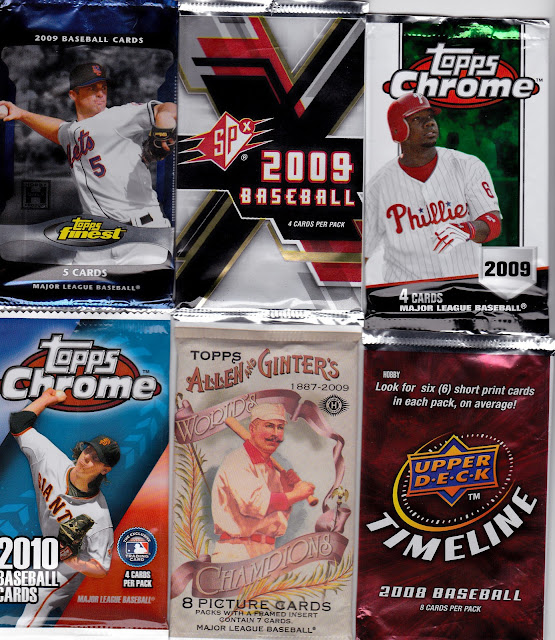 I know there are several wrappers that have disappeared forever. Outside of 2006 Topps and some Allen & Ginter, I may have ripped more retail Timeline than anything else. But I don't have any of the blue retail wrappers, only this red hobby one.

I don't know how long I'll have these wrappers. The box that they're in, I need for cards. So I'll see if I can find another storage spot. I'd hate to get rid of them because they do bring up happy memories when I see them.

They also remind me of something else ...

Good gosh, I buy a lot of cards.

If you get major hits on the words "sick" and "cardboard", imaging the insanity (shameless plug) you would get if you titled a post "I'm sick of cardboard"

Unknown said…
Love the copy on the wrappers - "One starquest foil card in every pack!" "Look for six short print cards in each pack on average" (It's an 8 card pack, wouldn't the two non SPs be more rare). I kind of like the UD x wrappers, they seem high class and sleek like I couldn't afford them, but I can :)
December 9, 2011 at 7:14 PM

Community Gum said…
Man, I wonder what happened to the "Guaranteed Value" promotion with Bowman. There's an interesting post in there for someone with the time to do some research... -A
December 9, 2011 at 7:21 PM

BASEBALL DAD said…
Very nice! Now you know why I collect wrappers. After the first of the year I plan to post my collection.
December 9, 2011 at 10:04 PM