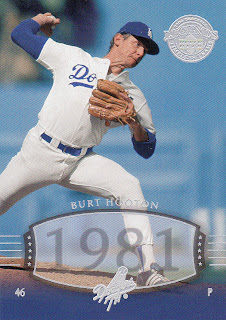 In 2004, my knowledge of the card-collecting landscape was as it was in 1993. I knew Topps was still around. I grabbed a couple of packs of those.

I figured Fleer and Donruss and Upper Deck were still kicking, too, although I had no idea how to obtain those cards. Not that I had any desire to do so.

But I didn't even think that there was much more to the story. I was freshly back into the hobby, and my only interest was completing my 1975 Topps set.

Little did I know that a cardboard revolution/war had sprung up a couple years after I left the hobby. Not only were Topps, Fleer, Donruss and Upper Deck still around, but each was producing about 12 different products apiece. There was Heritage and Cracker Jack and Total. Platinum, Tradition and Ultra. Studio, Team Heroes and Elite. Play Ball. Legendary Cuts and Vintage. Then throw in Bowman, which I had wiped from my memory, and Bazooka, and I can't believe this all went down without getting my attention.

I did discover Topps' All-Time Fan Favorites in '04. That was my re-entrance into the modern card scene. I continue to love that set.

But another one I would have liked, if I had known about it, is the Upper Deck Timeless Teams set. I'm all for putting old players on current cards, especially when they're players you don't see often like Burt Hooton and Alejandro Pena. I also love the concept of honoring great baseball teams of the past and not stopping with the 1927 Yankees and 1969 Mets.

It's a terrific set.

Among its assets is the card back: 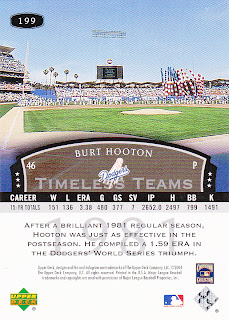 There are far too few card sets that show a collection of stadium photos. The 1992 Topps set is on the countdown because it was one of the first to do this. Recent Upper Deck issues displayed stadiums, too, but that was on the front of the card.

Timeless Teams is instantly collectible solely for the stadium pictures on the back. 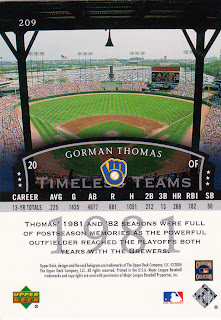 Unfortunately, since I wasn't collecting much modern stuff in '04, I have little variety in this set. Almost all of the cards are Dodgers.

But four years later, Upper Deck paid homage to its Timeless Teams set by including updated Timeless Teams cards in its Timeline offering, another set that I like a lot.

It even updated some of the stadiums: 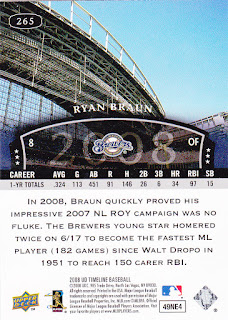 Unfortunately, that's not a very good look at the stadium. I don't care about the structure. I want to see the field. 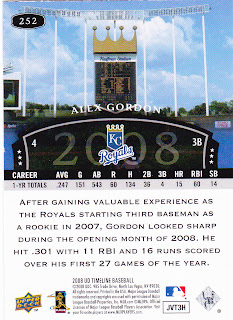 This one doesn't quite get it done, either. You see the Royals' unique scoreboard, but the rest of the field, including the fountains, is blocked out by the 2008 graphic. 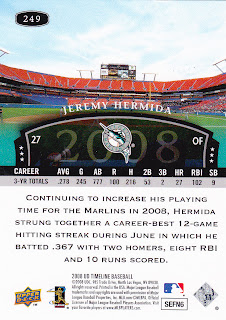 That's a little better. At least you can understand that nobody goes to Marlins games. 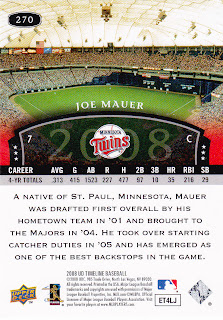 The Metrodome! Good riddance to that. But a nice look at what passed for baseball in Minnesota until they finally returned outdoors.

I've just mixed a bunch of Timeline cards in with the Timeless Teams set, but that's just to give you a better idea about Timeless Teams.

Of course, a lot of you were collecting in 2004 and already know about this.

OK, then. No need for me to say anything else.

No "best of set" for a set I didn't even collect.

Ryan G said…
I love stadium images and completely forgot about this set. I guess that's something else to add to the list!
February 10, 2011 at 10:00 PM

GCA said…
Didn't collect them in 2004, but this is one of my favorite sets because of the design and the spectacular photography. It's awesome to see different pictures of retired players. Biggest shame is, these kind of sets aren't even allowed any more. (Thanks a lot MLBPA)
February 11, 2011 at 8:38 AM