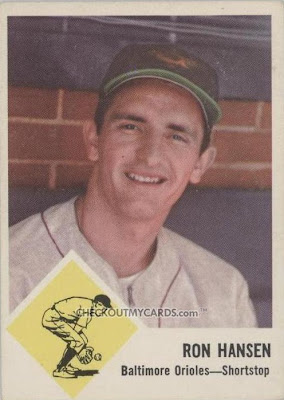 Before I get to the countdown, I wanted to mention a blog phenomenon that I find cool and humbling at the same time.

The much-loved and much-read blog site, UniWatch, linked to Night Owl Cards on Wednesday. While posting an interview with former major leaguer Jerry Reuss, Paul Lukas of ESPN fame linked to my own Jerry Reuss post. I now might have to rename my blog, "a baseball card site."

The measly 200-plus visits that I receive on an average day was eclipsed in a two-hour period. NOC received 800 visits Wednesday and 938 page views. And that, faithful readers, is the difference between the blog big boys and some dog-and-pony baseball card blog. But it's also cool.

Anyway, back to the countdown.

The latest card back countdown selection begins a short run of card backs that may not impress by today's standards, but are here anyway because I consider them iconic. 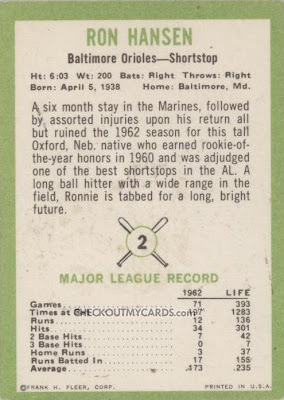 I do not have any 1963 Fleer cards. I just have the cheap Fleer Tradition imitation from a few years ago.

So, I'm showing just this one card here and hope you can appreciate its uniqueness.

For me, 1963 Fleer's card back is one of the most recognizable baseball card backs that there is. Sure, it's simple as hell, with not a lot to offer, but the simplicity is its selling point.

It is arranged in such a way that everything is easy to find and easy to read. Instant information from a card produced during a non-instant age.

But for me, the two best parts of the '63 Fleer card back are:

1. The color of the border and some of the lettering
2. The crossed bats behind the card number

The avocado color scheme instantly sums up the '60s. If you want something to say "1960s," spray it in avocado green. There are two other card backs in this countdown that also feature this color.

Without a doubt, I will have to get some '63 Fleer cards. Sooner rather than later. And it will be for the card backs as much as the card fronts.

I've got to get a freakin' card first. No best of the set yet.

Play at the Plate said…
The counter tops in my old house were "avocado green" and it was built in the 60's. That's cool about the link and extra hits. I'm shocked that you don't get that many extra hits when I link to your blog. Ok, not really.
September 16, 2010 at 3:47 AM

gcrl said…
i don't have any extra 63 fleer, and no, you can't have my maury wills rookie, but i am sending you the following:

deal said…
I agree the there is something about the 63 backs that is cool - it is sort of the sum of all the parts being greater than the pieces. The basic fronts go with the backs as well. picking up some 63Fleer is definitely on my todo list - just haven't gotten to it yet.
September 16, 2010 at 7:16 AM

Community Gum said…
I've never seen these card backs before... thanks for opening my eyes! They remind me a lot of the Diamond Kings backs when those had stats on them. Though I suppose DK should remind me of these, not vice versa! -Andy
September 16, 2010 at 9:02 AM

Andy said…
Are there any examples of card backs with the card numbers so far from any one corner of the card?
September 16, 2010 at 10:51 AM

Nachos Grande said…
I don't own any of those - but I can see what a pain they would be to sort, you'd have to flip each card over one at a time in order to be able to see the number smack dab in the middle of the card. That's a bad idea in my opinion, one that should never make a comeback on card backs!

As for the blog links, very cool - and congrats! I currently get about half the hits you do on a normal basis, but it's always fun when someone "bigger" links to your blog and the hits go wayyyy up.
September 16, 2010 at 11:34 AM

Andy said…
BTW I referenced this same issue on my own post about 1963 Fleer here:

Contrary Guy said…
Wait until one of the Yahoo baseball bloggers link to you. The meter spins wildly.
September 16, 2010 at 1:40 PM

Unknown said…
the '63 fleer is my favorite set I am still working on putting together (besides of course the 1970 Topps; I used to have avocado green with brass buttons swivel rocker bucket chairs in my home (up until about the year 2000 !) love that color !
September 18, 2010 at 11:19 AM

Matthew Glidden said…
It'd be interesting to know if 1963 Fleers mixed in night shot cards, or just used so much photo flash that it looks that way. Any thoughts?

night owl said…
I haven't seen a lot of '63 Fleers, but of the ones on the link, I don't think any of them are night shots. Mays and Koufax look like just a lot of photo flash. Wills looks like it was taken inside somewhere. But I'm not sure.
April 10, 2011 at 8:10 PM