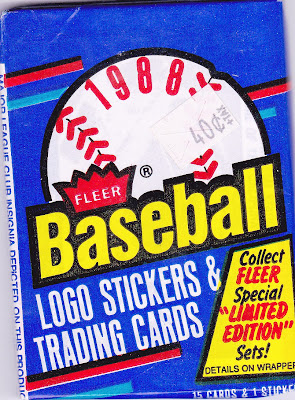 I won myself an unopened wax pack and some Dodger cards just for answering a simple question over at Closet Full of Cardboard.

I'll show the Dodgers some other time when the mood strikes, but I need to open the pack now, because it's something I've never done before.

I know. This is a pack of 1988 Fleer. I can hear you groaning already. But you can't assume that everyone was 10 and opened garbage cans full of cards in '88. I was 22, on the verge of college graduation, and had met my future wife only five months earlier. I spent '88 mostly in the company of my girlfriend, and I promise you the topic of baseball cards never came up once during that year.

Twenty-three years later, the secret is out. My wife is all too aware of my obsession with baseball players on cardboard. I open packs right in front of her without shame or remorse. She's even bought some cards for me when she's feeling brave and daring.

Things are a lot more comfortable now than those hormone-laced days of '88 when there was a purpose behind every sentence and a reason behind every action. So, I figured what better day to open a pack of cards that I never got to open in 1988 because I was too busy chasing my eventual wife, than Valentine's Day? That's how secure we are.

Enjoy the gift, sweetheart. Now, on to the cards.

First, a look at the wrapper again:

Please note that there are 15 cards and one sticker for 40 cents. That makes Opening Day look like one of those $100-per-card boxes that comes with an offer to lease your soul.

Also, I enjoy Fleer listing the logo sticker before the trading cards, like stickers are the reason why people were buying packs of this stuff. I suppose it's better than pink cardboard gum, but it's definitely not why I'm at the show. 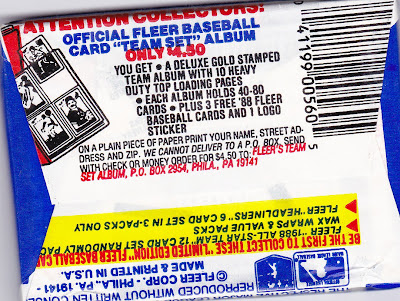 I missed out on the Official Fleer Baseball Card "Team Set" Album because I was getting tanked at a college bar (the name of which I don't recall) with my girlfriend. Anybody got one of these? Team set albums, not girlfriends.

One last thing before we see the cards:

I happen to like 1988 Fleer. It is the last Fleer set before it spiraled downward into a pathetic series of sets between 1989-92, otherwise known as A Card Company's Public Cry for Help.

Now, let's see what I was missing: 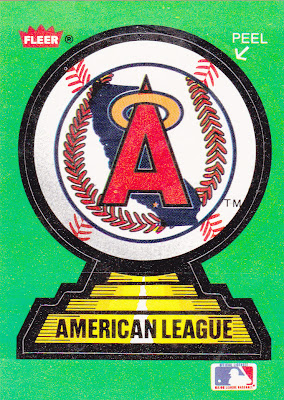 The requisite sticker. The Angels do not excite me. 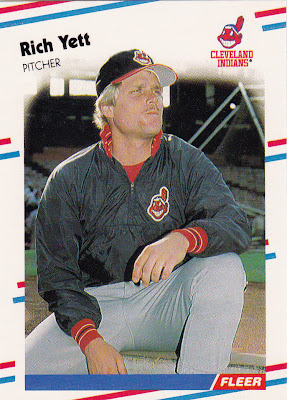 First card is Mr. Yett. Perfect. I don't think there was a junk wax pack that didn't contain Rich Yett. I wouldn't be surprised in the least if Momma Yett worked for all of the card companies between 1988-91. 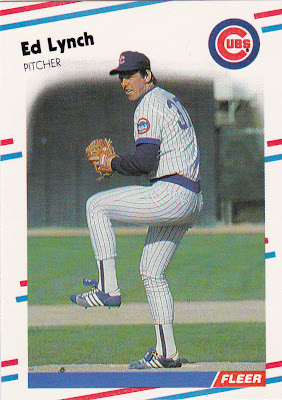 Master of the double chin. Now scouting for the Blue Jays. Always got him confused with Ed Glynn. 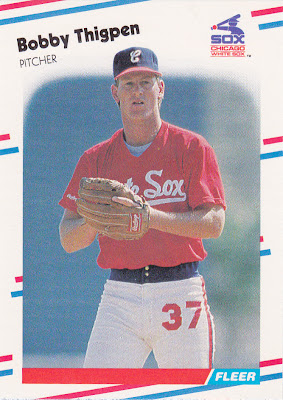 Really wanted Eric Gagne to catch Thigpen in 2003. Was willing to pay MLB to jury-rig the save rule to get Gagne two more saves and tie Thigpen. 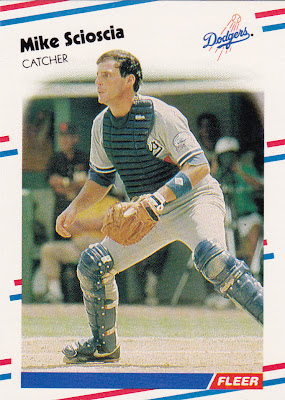 The man whose departure from the Dodgers is blamed for every problem L.A. has had since that point. I'm not willing to go that far, but he could have saved the Dodgers from Grady Little at the very least. 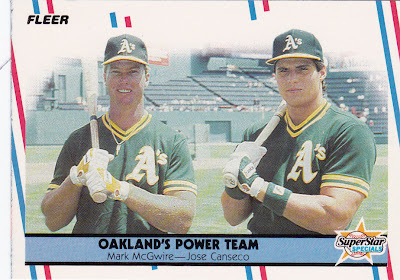 Oooh. I just found me a card that will earn me thousands! All I have to do is sit on this baby until 1992 and let the cash pour in the windows! I'm a be stinking rich! 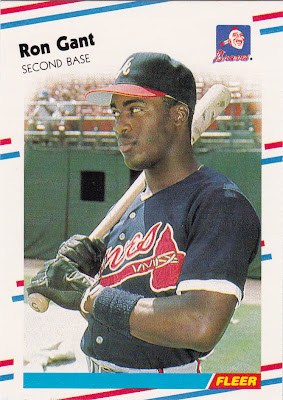 The first thing I think of when I see a Gant card is his ATV accident. ATV accidents are like a ritual of summer around here (but not as much a ritual as snowmobile accidents in the winter). Boating on the lake, ice cream, and doing a face plant into an oak tree. 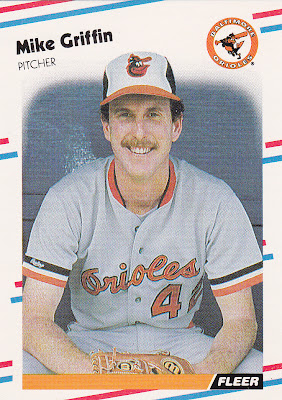 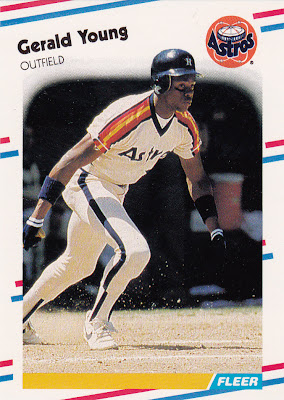 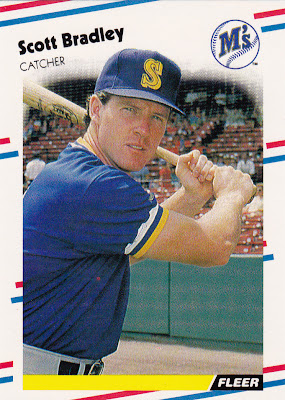 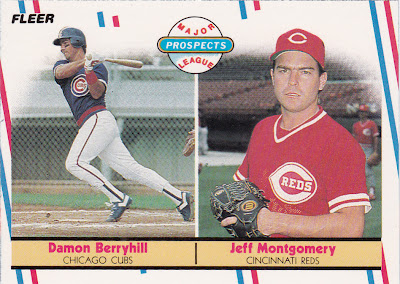 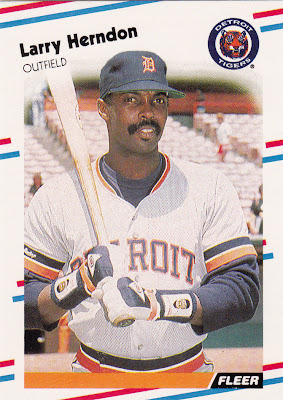 Sorry. The pack was starting to make me sleepy. I had to fast-forward. 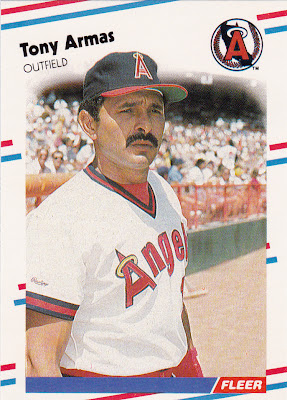 Tony Armas during his Angels exile years. Dude was a force with the A's. Whiffed like he was afraid he'd run out of strikeouts, but tremendous to watch. 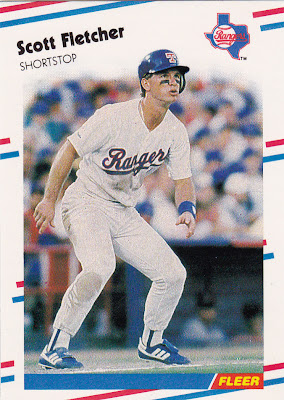 The Yankee killer. Annihilated the team. This also might be a night card. So this could be the highlight of the pack. 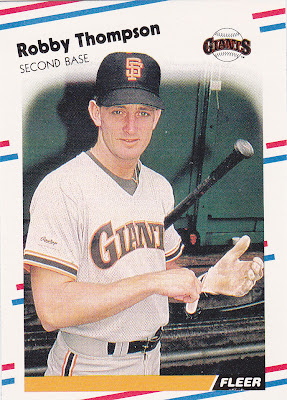 One of several Giants of this period who looked like he was raised in a swamp. Not a fan. 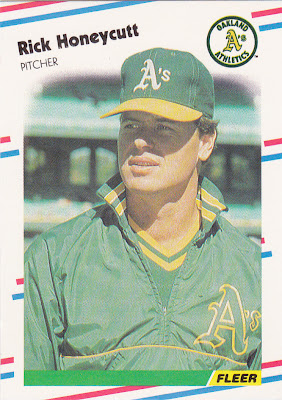 Finally, the Dodgers' pitching coach (don't do anything stupid, Rick). This was shortly after Honeycutt went 2-12 for L.A. and was sent to Oakland in the Tim Belcher deal. The Dodgers proceeded to beat Oakland and Honeycutt about the head with Belcher in the '88 World Series. Ha!

It's also the first World Series I watched with my girlfriend/future wife.

See how nicely everything ties together?

Anyway, the pack wasn't anything great, and I didn't really miss much by not collecting in '88. I think I made the right decision back then.

And I think I'll stop before it descends into mushiness.

Anonymous said…
I checked the CPI inflation calculator, and that pack would be 75 cents today.

Cardsplitter said…
I remember when the corner store across the road got '88 Fleer. I was so excited to get my hands on as many packs as I could, and even got the box bottom.

madding said…
I remember a lot of people, including a neighbor kid down the street, paying way above market value for this stuff back when it was new. I guess everyone was expecting this to be even better than 1987 Fleer.
February 15, 2011 at 2:30 AM