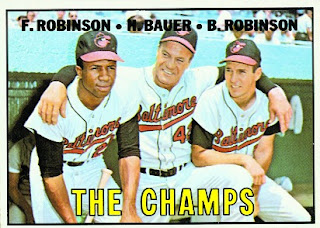 You people realize I have other post ideas planned, right? I can't go off chasing someone's spin-off thoughts just because they think they're interesting. I have a strict and regimented schedule that has been designed to perform at maximum efficiency. This is a perfectly organized, smooth-running, slick-looking blog capable of ...

Oh, what the hell.

Last night's post prompted two ideas in the comments that I thought I'd explore a little bit. The first is the perception that players stay with one team their whole careers less often than they did, say, 25 years ago. That was my perception in last night's post. I actually never thought staying with one team for an entire career was "common." I just thought it was not as rare as it is today.

But after thinking about a little, I think what is probably more true is that players skip around from team to team more often than they once did. Free agency and expansion would be definite factors in that phenomenon.

The second idea suggested in the comments was to find some combo cards from a pre-free agency era and do a "five years later" study on those cards, like I did with the 2006 cards. Then afterward maybe everyone can jump to conclusions.

So I've put previous post ideas on the back burner (those trade posts are really piling up now) to explore the 1967 Topps combo cards. I picked them only because I think they're the best combo cards Topps ever did.

And don't get any ideas that I have these cards. I don't. They were all shamelessly stolen.

So let's start with card No. 1 in the set, the card you saw at the top of the post:

1. The Champs: Frank Robinson and Brooks Robinson (Bauer was the manager, so I'm ignoring him).

Five years later, F. Robby was a brand new member of the Los Angeles Dodgers, sent to L.A. in a trade with Baltimore for Doyle Alexander and a bunch of nobodies. B. Robby, meanwhile, was still picking it at third for the O's in 1972. 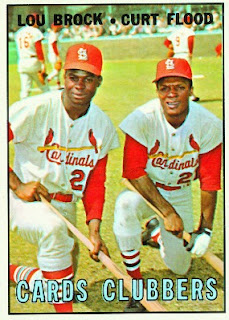 In 1972, Brock was still a Cardinal and getting closer to the stolen base record. Flood was spending his first year out of baseball after taking on baseball's reserve clause and getting shunned by all of MLB. 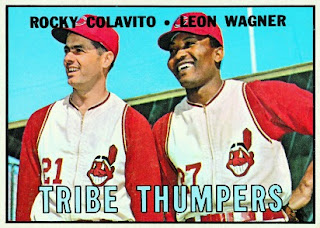 Neither player was in the majors in 1972. Both were out of the game by the time the '70s began. 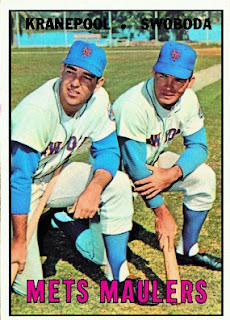 Kranepool still played for the Mets in 1972. He's one of 66 players who played in the majors for at least 15 years all with one club. Swoboda had moved over to the Yankees by 1972, after spending a year in Montreal. 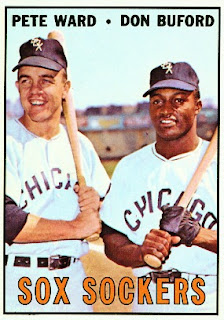 Ward, who has the honor of being the only player featured on this post that I had never heard of before, was done in the majors by 1970, finishing with the Yankees. Buford was in his final season in the majors in '72, his fourth year with the Orioles. 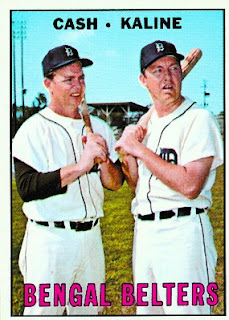 You're looking at two Tigers who played all but two of their years in the majors with Detroit (Cash started out with the White Sox). Both were still motoring for the Tigers in '72. 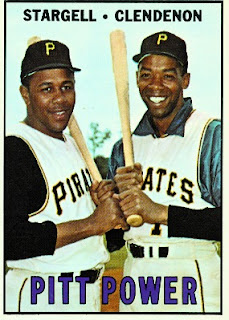 Stargell never played for anyone but the Pirates and he was still in Pittsburgh in '72. Clendenon ended up with the 1969 Miracle Mets. He was in his final season in '72, with St. Louis. 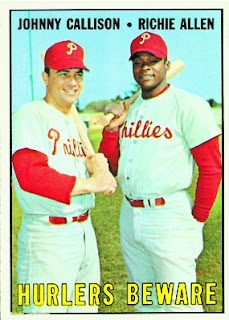 Neither player was with the Phillies five years later. Callison was with the Yankees, after two years with the Cubs. Allen was on his THIRD team since the Phillies in 1972, playing for the White Sox. And no one was calling him Richie anymore either. 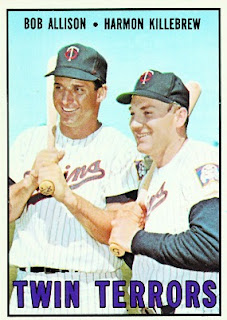 Allison, I think is one of the best of the forgotten sluggers. He retired after the 1970 season. Killebrew was still Killer with the Twins in 1972. 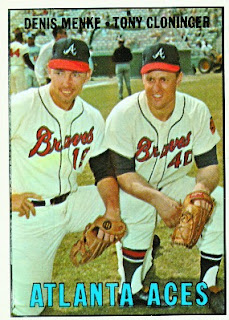 I don't get this one, because Menke was not a pitcher. But anyway, Menke played for Cincinnati in 1972 after four years with Houston. Cloninger was in his final season, playing for the Cardinals. 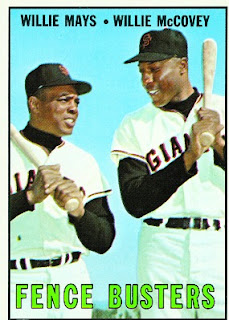 Poor Mays had been shipped to the Mets during the 1972 season. McCovey still had a couple more years before being dumped in San Diego. He was still a Giant. 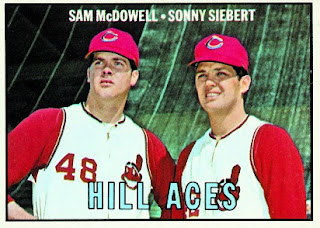 How is it that the Indians get two of these cards and the Dodgers get none?

Anyway, McDowell wasn't as "sudden" in '72 and was spending his first year with the Giants. Siebert was pitching for the Red Sox after getting traded to Boston in 1969. 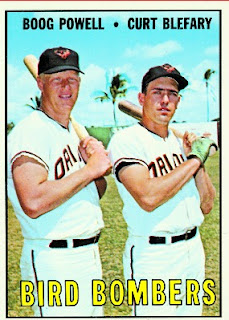 Big Boog was still bombing away for the O's in '72, while Blefary's last season was 1972 with the A's and Padres.

Those are all of them, I think. Hope I didn't miss any. (EDIT: I missed two, but they have since been added).

And here is the breakdown:

Here is the breakdown for the 2006 combo cards:

Keep in mind there are two fewer combo cards in the '67 set than the '06 set.

So after looking at that, what do I think?

Well, according to this very unscientific examination, I think early '70s players seemed to move around at about the same rate as they do today. So never mind what I said at the beginning of the post.

It looks like if there were as many combo cards as there were in '06 there would be more examples of players remaining with the same team, but not enough for it to be significant.

That's about as deep as I'm going to get with this. If I start analyzing things in any kind of statistically-intense manner, I'll start hating this blog, and I don't want to do that.

So, you can take from this what you want.

Meanwhile, I'll be planning my next post, and it's going to be all my idea.

Jim from Downingtown said…
I love these cards! (but you already knew that)

Jim from Downingtown said…
Yeah, that's strange that the Indians & Orioles got 2 of these cards, while other teams had none.

deal said…
Thanks for doing the legwork on this one - great looking 1967s too.

Perhaps in 1967 the players were more established and therefore closer to retiring. THere are more teams now which could foster movement. but the 1967 teams would go through the expansion draft for the Pilots/Expos/Padres and one other team.
February 27, 2011 at 7:12 PM