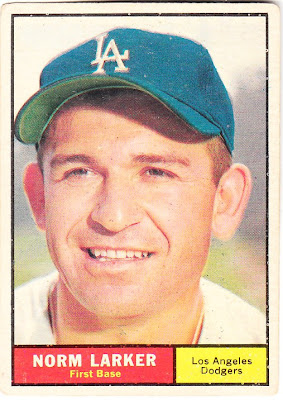 That was fine by me. That's what I grew up with, and I liked it. That's why the card backs from this era are ranked higher than some more modern sets. But in terms of ranking the backs of cards, it's difficult to differentiate between them all. Most of it comes down to personal preference -- do I like the color on the back, do I like the style of cartoon, is the back readable, etc?

The 1961 Topps set is not one of my favorites. My complete disinterest in 2010 Heritage confirms my opinion on that. But I think the card back fairs a littler better than the card front. 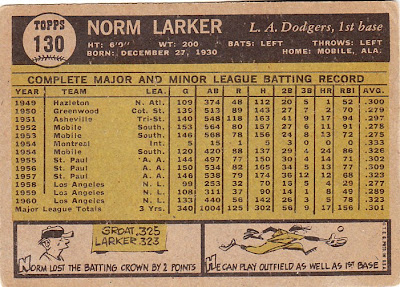 Not a great color choice for a background. But better than some (I still want to know what what people were smoking when they decided to use orange type on the back of the 1964 Topps set).

Still, everything that you need is there. Complete stats. A nice big card number. And not one, but two, cartoons.

In fact, with some cards in the 1961 set, you got three cartoons. 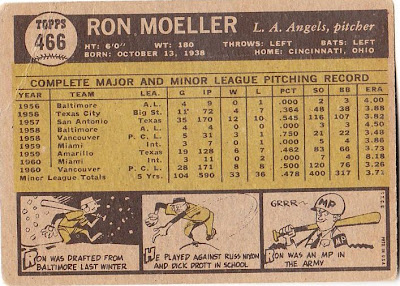 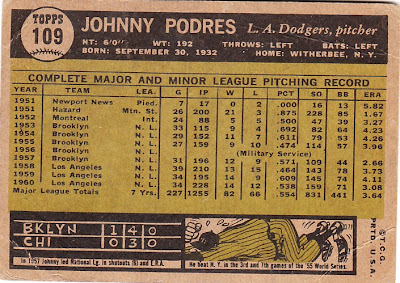 It took me a long time to figure out what was going on with the cartoons here. At first I thought it was one cartoon. Then I kept trying to figure out why a Dodger would be crying about Podres performance in the '55 Series (the pinstripes didn't register right away). 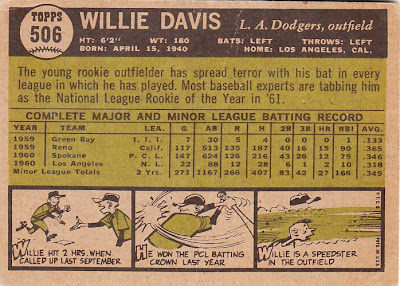 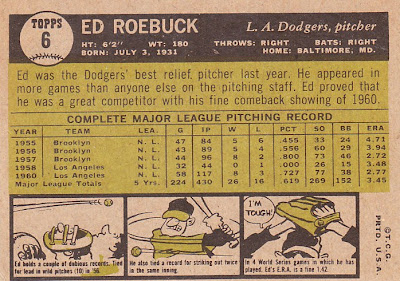 The cartoons also seem to have been drawn by at least two different people. The cartoons on the Davis and Roebuck cards look different.

All in all, the 1961 set has what I want in a card set. It's maybe a little dull, but if you slap a cartoon in there, feature a complete career of stats, and make it readable, that's all I need.

Not with this one. Like many '50s and '60s cards, I don't have enough to feel comfortable finding the best card.

Chris Stufflestreet said…
One of the artists who drew cartoons for Topps in the 1960s was Jack Davis. Fans of Mad magazine remember him well, and his work is unmistakable on that Willie Davis card.